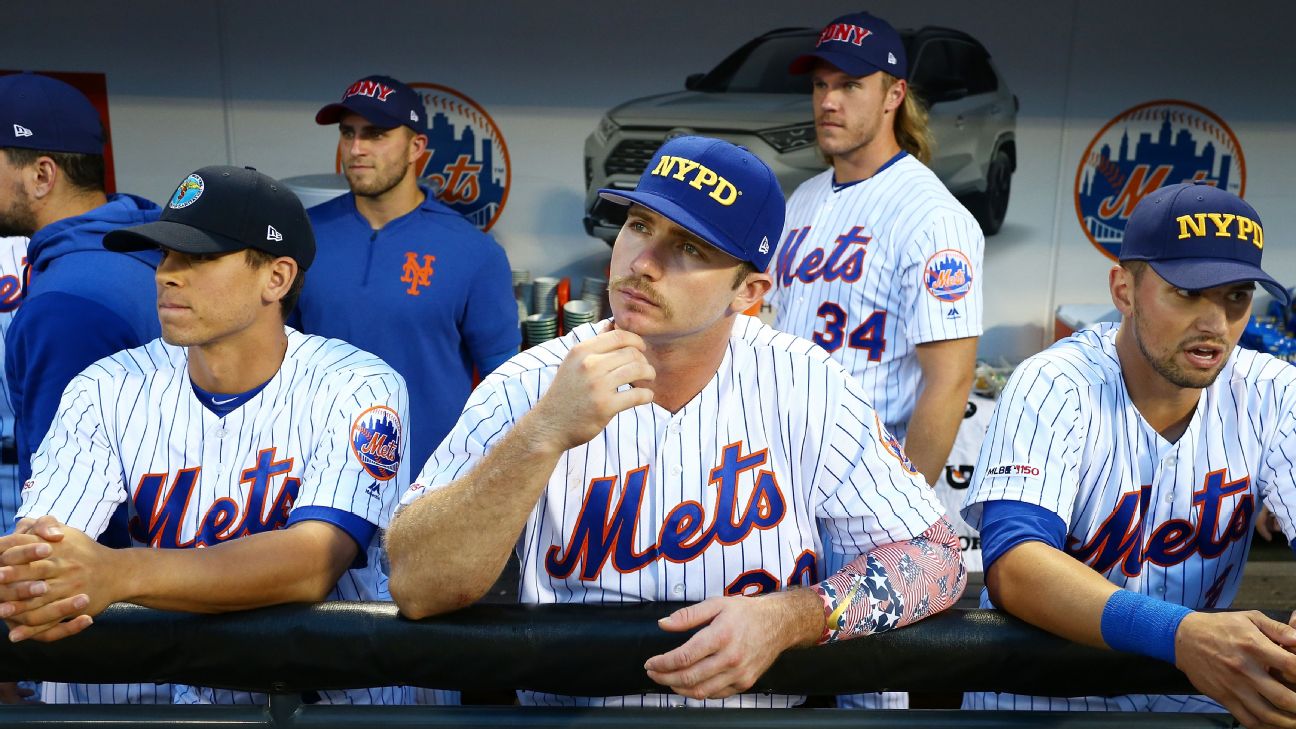 NEW YORK --Metsslugger Pete Alonso visited the National September 11 Memorial & Museum on Tuesday to donate the custom first-responder cleats and baseball bat that he used in a game on the 18th anniversary of the terrorist attacks.

Alonso, whopresented the equipment to museum president Alice M. Greenwald, said "it means the world" that the memorial wanted the gear for its permanent collection.

"Just being here in New York, I just wanted to show every bit of gratitude I could," Alonso said. "Not just for the first responders, but for the families as well who were directly impacted. You guys will not be forgotten."

The 24-year-old rookie surprised his teammates with customized spikes to wear during a game against the Arizona Diamondbacks. He had spent weeks jotting down their shoe sizes, preferred brands and styles, then hired a company to paint them red, white and blue with lettering for first-responder units.

The Mets wound up beating the Diamondbacks 9-0, and they had 11 hits.

"I barely got the words out of my mouth that the museum wanted them and Pete was saying, 'Absolutely," Wilpon said.

Greenwald thanked Alonso for "such a meaningful gesture of remembrance and respect" and called it an "extraordinary gift."

"They might smell a little," Alonso warned. He added that it was "seriously an honor."

Alonso and fiancee Haley Renee toured the museum before the presentation ceremony, which ran about 30 minutes late because Alonso was so deliberate exploring the exhibits. This was his fourth visit to the museum, which opened in 2011.

"There are some absolutely breathtaking artifacts here," he said.

Alonso was a first-grader in Tampa, Florida, on Sept. 11, 2001. He remembers being in school when he learned of the attacks, but he said he gained a greater appreciation for the day's impact when he played for the Mets' minor league affiliate in Brooklyn in 2016.

He recalled seeing television commercials advertising compensation for ill 9/11 survivors. More than 2,100 people have died due to diseases linked to the debris from the fallen towers, nearing the roughly 3,000 killed directly in the attacks.

After winning the All-Star Home Run Derby in July, Alonso donated $50,000 of his $1 million prize to the Tunnels to Towers Foundation, which supports families of fallen first responders. He also gave $50,000 to the Wounded Warrior Project.

"It's still a continuous thing," Alonso said. "That's what I really didn't understand. The fact that it's still currently impacting the community today, to me, is appalling."

Alonso, the favorite to win National League Rookie of the Year after leading the majors with a rookie-record 53 home runs, initially asked Major League Baseball if he could have hats designed for the game. The league hasn't permitted the Mets to wear first-responder hats since 2001, and it rejected Alonso's proposal.

Alonso did not contact MLB about the cleats, fearing more red tape might get in the way.