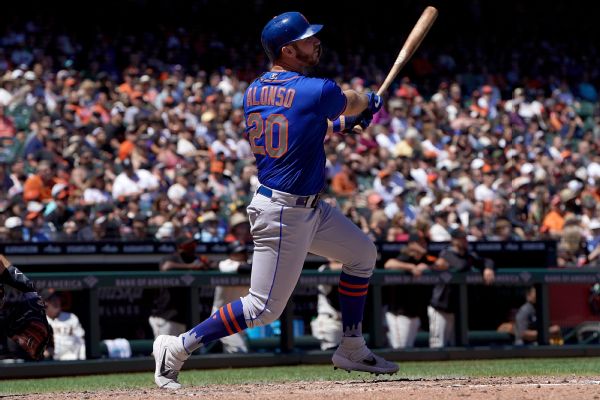 NEW YORK -- Mets slugger Pete Alonso hit his 52nd homer of the season, tying Yankees star Aaron Judge's total from 2017 for most by a rookie.

Alonso lined an 0-1 fastball from Atlanta left-hander Dallas Keuchel narrowly over the wall in left field in the first inning Friday night. He smiled as he hurried around the bases and pointed to the home fans as he crossed the plate. Teammates greeted him with handshakes outside the dugout, and the crowd at Citi Field insisted on a curtain call.

"Unbelievable. When I was rounding the bases I felt like a little kid. I felt like a 7-year-old kid," Alonso said. "I was just really kind of overcome with pure joy and emotion. I don't think I've had a happier time in my life playing baseball. That is the ultimate. That's what dreams are made of. It's unbelievable that it happened. I still can't believe it happened."

Keuchel was booed when he walked Alonso in the third inning, and the big slugger popped up and struck out in his final two at-bats. The Mets won 4-2.

Alonso leads Cincinnati's Eugenio Suarez by three for the majors' home run lead and would be the first rookie since at least 1900 to claim the big league crown outright. Manager Mickey Callaway said he might bat Alonso leadoff in the final two games to get him extra at-bats, and Alonso was eager to slide up a spot.

A history major in college with "an affinity for that kind of stuff," Alonso said he's struggling to comprehend the accomplishment.

"When I think of baseball history, I think old-timey guys like Lou Gehrig, Babe Ruth, Barry Bonds,'' Alonso said. "Geez, I mean, to think that as a rookie I hit more homers than everyone except for one guy, it's nuts. It's crazy. I'm not trying to sound any other way. It's just, wow.''

Judge, who has struggled with injuries the past two seasons, has 26 homers in 100 games in 2019. He predicted late Friday night that Alonso would break the rookie record.

"No better person to share it with. He's eventually going to break it, I know that for sure," Judge said. "Happy for him. I had a chance to meet him this year and talk to him a little bit, and no better individual to represent not only the Mets but the city of New York. He's going to do a lot of special things over his long career. I'm excited for him. This is just the beginning for him, the first of many records he's going to break."

Alonso has already set franchise records for homers, total bases (343) and extra-base hits (84). He has 119 RBIs and 100 runs, becoming the first Mets rookie to reach triple digits in both categories. No New York player had reached those totals in any season since David Wright and Carlos Beltran in 2008.The 119 RBIs put Alonso just five away from matching Wright's all-time single-season franchise record.

"He's been outstanding,'' Callaway said. "There's just something about Pete that draws everybody in."

Alonso's 52nd homer also tied him with for second-most all time in a player's first season with a team. Alex Rodriguez hit 52 in 2001, his first season with the Texas Rangers. Babe Ruth holds the record with 54 homers for the Yankees in 1920, after he was traded from the Boston Red Sox.

In a record season for home runs in the majors, Alonso's long ball feat wasn't the only one achieved Tuesday night. The Yankees got in on the fun when they became the second team in MLB history with 300 homers in a season. They joinedthe Minnesota Twins, who reached the mark on Thursday. 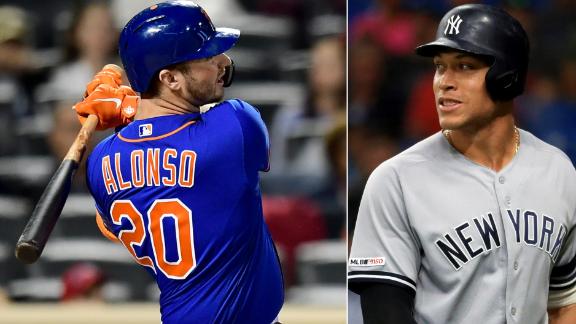