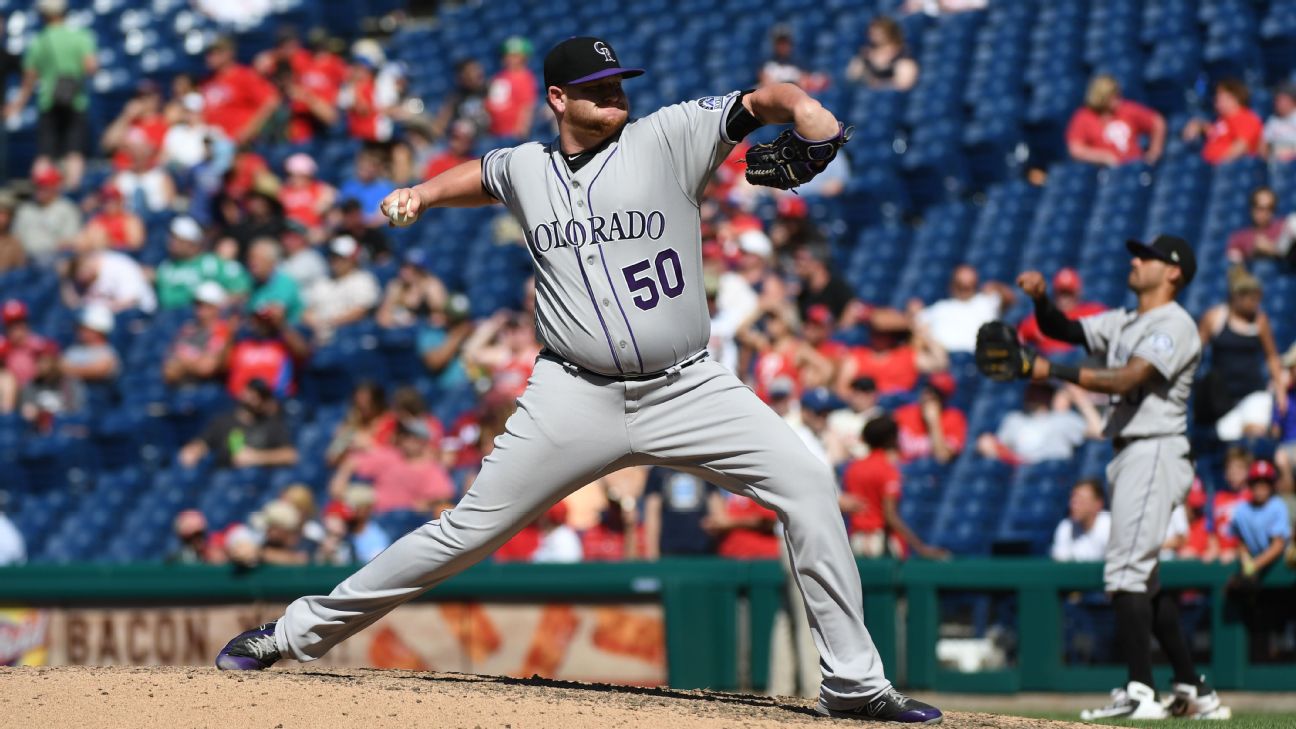 NEW YORK -- Desperate for help in a failing bullpen, the New York Mets acquired reliever Brooks Pounders from the Cleveland Indians for cash on Saturday.

Pounders, who had been pitching at Triple-A Columbus, was immediately added to the major league roster. The Mets (33-36) also recalled right-hander Chris Flexen from Triple-A Syracuse and put him in the bullpen against St. Louis as well.

Right-hander Tim Peterson was optioned to Syracuse, and veteran lefty Hector Santiago was designated for assignment.

In other news, the Mets signed first-round draft pick Brett Baty, a 19-year-old third baseman out of Lake Travis High School in Texas. He received a $3.9 million bonus, below the slot value of $4,366,400 for being the 12th overall selection.

Dating to May 21, the Mets had four saves and 12 blown saves.

Familia, inked to a $30 million, three-year contract to be Diaz's primary setup man, was on the injured list from May 1-12 with a sore right shoulder and has an unsightly 6.91 ERA in 28 appearances.

"We have confidence that we can get him back to where he's been," first-year general manager Brodie Van Wagenen said.

Wilson ($10 million, two-year contract) and Avilan ($1.6 million for one year) are on the injured list.

"We're not going to sit on our hands and hope things are going to change," Van Wagenen said. "We're going to keep working and try to be proactive."

"I've seen some video of this year. It looks like the slider has improved over what we'd seen in the past," Mets manager Mickey Callaway said. "And we told him today, 'Hey, be ready for any situation.' Obviously, our bullpen's been struggling and we're not going to hesitate to use him however we see fit."

Primarily a starter in the minors, the Mets are trying Flexen in the bullpen to see if he can help.

"Chris Flexen came up at a very young age and he's going to run out of options sooner or later," Callaway said. "We love what we've seen this year out of his stuff, the 96 (mph), the 97 (mph) that we've seen on occasion. We like the plus slider that he's flashed.

"I think at this point with the way our bullpen's been going, and just for his development stage and to try and make sure he's as impactful as he possibly can be to our organization, that maybe this bullpen role will be the best for him at this moment. We can always go back and try to get him to start if need be. But we're hoping we have an impactful reliever here."

The baby-faced Baty passed up a college commitment to his hometown Texas Longhorns to begin his professional career with the Mets. He took batting practice at Citi Field and was formally introduced at a news conference, slipping on a No. 19 jersey with his parents and sister in attendance.

"It was just an amazing feeling," Baty said. "It was a little nerve-wracking, but once I started hitting it just kind of came out."

Even rookie slugger Pete Alonso was impressed by Baty's prodigious left-handed power, and the two chatted on the field.

Baty will head Tuesday to the Mets' complex in Port St. Lucie, Florida, and begin his pro career in rookie ball. He is from the same high school that produced Cleveland Browns quarterback and 2017 Heisman Trophy winner Baker Mayfield.

Game notes: Right-handed reliever Tyler Bashlor was returned to the minors after serving as the 26th man Friday night when the Mets finished a suspended game against the Cardinals and then played the regularly scheduled one. New York lost both, after squandering a ninth-inning lead in the first one and an eighth-inning advantage in the nightcap. ... OF Brandon Nimmo (neck) was returning to New York to be examined and treated after he was scratched from a scheduled rehab appearance with Syracuse with neck stiffness Friday night. Nimmo hasn't played in the majors since May 20.
Report a correction or typo
Related topics:
sportsespnmlbnew york metschris flexenbrooks pounders
Copyright © 2021 ESPN Internet Ventures. All rights reserved.
More Videos
From CNN Newsource affiliates
TOP STORIES