Mets shut down David Wright again after his back flares up 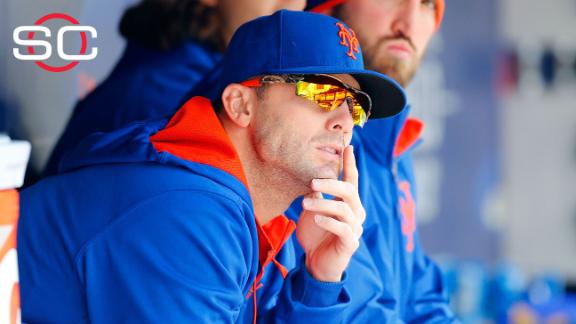 Wright, 32, originally landed on the DL on April 15 with a right hamstring strain.

As the muscle healed and he was nearing a minor league rehab assignment, lower-back pain arose and Wright was shut down. He resumed baseball activity this week at the team's complex in Port St. Lucie, Florida.

Now, he is having a recurrence of that back issue and will be shut down from baseball activity for a week.

"He's still experiencing some lower-back tightness," assistant GM John Ricco said. "It's at the point where we're going to stop the on-field stuff for a week, continue with a program of core strengthening and basically back-stabilization exercises. They hope that will alleviate what he's feeling.

"When I talked to David, he said that when they initially put him on some medication, he got a lot of relief. But that's kind of plateaued. It hasn't been knocked out completely. So the doctor said that to try to give that a chance to happen we want to back off the running and just get him doing these exercises for another week and see where we are at that point."

Wright missed two months in 2011 with a stress fracture in his lower back. However, Wright was examined by team doctors on May 7 in New York. The medical team determined that the third baseman had not suffered a repeat of that injury.

Ricco said the initial diagnosis was stenosis -- a narrowing of the spinal cavity in the middle of Wright's lower back -- but not a disk issue. "They thought at this point he should be pain-free for the most part," Ricco said. "He's not, so this is the way they recommended to try to strengthen the core and hopefully stabilize the back."

When infielder Dilson Herrera landed on the DL on May 15 with a fracture to the tip of his right middle finger, Eric Campbell returned from Triple-A Las Vegas to handle third base and Daniel Murphy returned to second base.

Mets third basemen have combined to hit .263 with two homers and 15 RBIs through 43 games.

Ricco said he expected Mets officials to speak after the weekend to see if another infield alignment might be best given Wright's setback.