Mets slammed by Marlins, fall 5G back of Brewers with 6 left 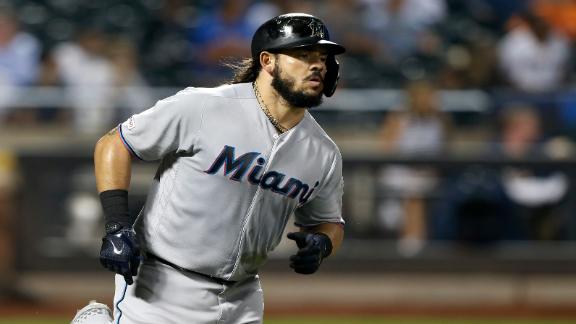 Three outs from postseason elimination, the Mets tied it 4-all in the ninth when Conforto clocked his second two-run homer of the game, connecting off Jose Urena for his 33rd long ball of the season. Brandon Nimmo won it by working a bases-loaded walk in the 11th against rookie Jeff Brigham.

After wins by Washington and Milwaukee earlier in the day, the Mets needed a victory to stay in the pennant race. They are tied with the plummeting Chicago Cubs, five games behind the streaking Brewers for the second NL wild card with five to play.

Conforto drew a leadoff walk from Adam Conley (2-10) in the 11th, and Brigham hit Amed Rosario with a 97 mph fastball. A wild pitch advanced both runners before Todd Frazier was intentionally walked.

One out later, Nimmo walked on a 3-1 pitch to force in the winning run. He jogged to first base where Pete Alonso pulled off his teammate's jersey, leaving Nimmo doused and soaked in a blue undershirt.

Paul Sewald (1-1), the seventh Mets pitcher, struck out two in a perfect inning for his first major league win in 119 appearances. He began his career with 14 straight losses, an NL record. The only pitcher with more was Terry Felton, who dropped all 16 of his career decisions with Minnesota from 1980-82.

Vic Darensbourg was the lone big league pitcher to have more appearances than Sewald without a win (123).

Miami prospect Isan Diaz homered early and hit an RBI single off Noah Syndergaard, who gave up 10 hits for the second consecutive start. Leadoff batter Jon Berti had three hits, an RBI and four of the Marlins' six stolen bases -- four against Syndergaard.

Miami was 6 for 6 until catcher Wilson Ramos, who didn't start, threw out Harold Ramirez trying to swipe second for the final out of the 10th.

Tomas Nido was behind the plate for Syndergaard, who expressed to the Mets his preference of pitching to backups Nido or Rene Rivera rather than Ramos. The big right-hander lasted five innings and allowed four runs for the fourth outing in a row. He hasn't gone six innings in any of them.

New York was 40-51 and all but forgotten after dropping its first game following the All-Star break. But the Mets made a surprising push and closed within two games of a wild card by finishing a four-game sweep of Arizona on Sept. 12. They are 82-75, securing their third winning season in five years following a six-year drought.

But now they have no margin for error at all -- and they need Milwaukee to lose five straight for a chance to force a wild-card tiebreaker.

Sandy Alcantara carried a shutout into the seventh for Miami before the Mets finally woke up a quiet crowd of 21,766. J.D. Davis hit a leadoff double and Conforto drove an 0-2 mistake to right-center to cut it to 4-2.

Conforto went 3 for 4 in his sixth career multihomer game and second this season -- both against Miami.

Diaz became the first rookie to homer off Syndergaard and Mets ace Jacob deGrom in the same season.

Mets: 2B Robinson Cano returned to the lineup. He received a scheduled rest Monday night, one day after getting hit by a pitch on his left big toe. ... RHP Robert Gsellman (lat) would probably like to throw more live batting practice, manager Mickey Callaway said, and LF Dominic Smith (foot) could take swings against Gsellman again. But there's no guarantee the team would activate either one of them off the injured list before the season ends.

Mets: Bidding for a second straight NL Cy Young Award, deGrom (10-8, 2.51 ERA) makes his final scheduled start this season. The right-hander entered Tuesday leading the league in strikeouts with 248 and WHIP at 0.99. He ranked second in ERA and fourth in innings (197). And he's been finishing strong in September, with consecutive outings of seven scoreless innings the last two times out. He has pitched seven innings in seven straight starts and 11 of his past 12.