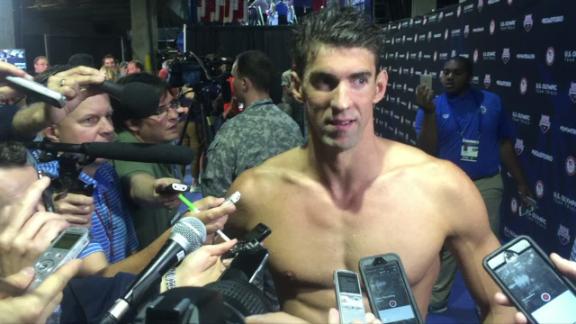 OMAHA, Neb. -- Michael Phelps surged to the wall and then whipped around to spot his time.

The only thing that mattered was No. 5.

The most decorated athlete in Olympic history is Rio-bound.

Phelps became the first U.S. male swimmer to qualify for five Olympics with a victory in the 200-meter butterfly at the U.S. swimming trials Wednesday night, another huge milestone in the water but even more significant, given what has happened away from the pool.

A second drunken-driving arrest. A re-evaluation of his life. An impending marriage. And his first child.

"With everything that's happened and being able to come back, that was probably harder than any swim I've had in my life," Phelps said.

With 7-week-old Boomer in the arms of Phelps' fiancée at the CenturyLink Center, Phelps cruised to a victory that he said meant as much personally as all those triumphs that came before.The infant wore noise-canceling headphones adorned with American flags so he wouldn't be startled by the huge roar that went up when his dad touched the wall first.

Phelps reflected on his stumbles since London, most notably a second drunken driving arrest that he said prompted him to take a whole new look at his life. He reconnected with his long-estranged father, got engaged, gave up alcohol and committed himself to closing his career with a flourish.

"It's probably more nerve-wracking here than it is at the Olympics," Phelps said. "Just being able to finish how I want to is so important to me. Getting on this team is what I wanted to do."

He wasn't the only one feeling a bit of redemption.

Missy Franklin turned in one of the gutsiest performances of her career to earn a spot for Rio in the 200 freestyle. One night after she struggled to seventh in the 100 backstroke, an event she won four years ago in London, there was plenty of speculation that she'd be hard-pressed to qualify for any individual events at these Games.

Franklin herself sounded as though she'd be happy just getting on the team as a relay swimmer.

Turns out, she'll be busier than that in Brazil.

While Katie Ledecky romped to victory in the 200 free, earning a second individual event at the Olympics, Franklin rallied over the second half of the race to claim the runner-up spot.

Ledecky added the 200 free to her rapidly growing Olympic schedule, winning comfortably with a time of 1:54.88. She already won the 400 free and still has two more events to go in Omaha.

But all eyes were on Franklin, who touched in 1:56.18 to edge out Leah Smith by just under a half-second. Allison Schmitt, the defending gold medalist, settled for fourth but that will at least be good enough to get another London star on the team as a relay swimmer.

Ledecky and Franklin embraced on deck after climbing out of the pool.

"She's one tough cookie," Ledecky said. "She got the job done tonight."

"Last night was really tough and coming back from that, I was telling myself, 'I'm not done fighting. I'm not done with believing in myself,'" Franklin said. "That's probably the most proud race I've ever swam in my entire career, coming back from such a loss last night and telling myself that I still have it in me to do whatever I believe I can do."

Phelps held off a stiff challenge from Tom Shields to win the 200 fly, the first event Phelps ever swam at the Olympics, 16 years ago in Sydney.

One day before his 31st birthday, Phelps came full circle in the race he's always considered his baby.

Phelps touched in 1:54.84, far off the world record of 1:51.51 he set at the 2009 world championships while wearing one of the high-tech suits that have since been banned.

There's time to work on his speed between now and Rio.

For now, Phelps sounds like an Olympic rookie talking about the thrill of going back to the Olympics, where he'll get a chance to add to the already staggering amount of hardware he has accumulated at the last four Summer Games: 18 golds and 22 medals overall.

He also joined a pretty exclusive group with Dara Torres, who made five Olympics on the female side.

"I just said, 'Welcome to the club,'" the now-retired Torres said. "Just to see his emotions and how excited he was and relieved, it was really nice to see." 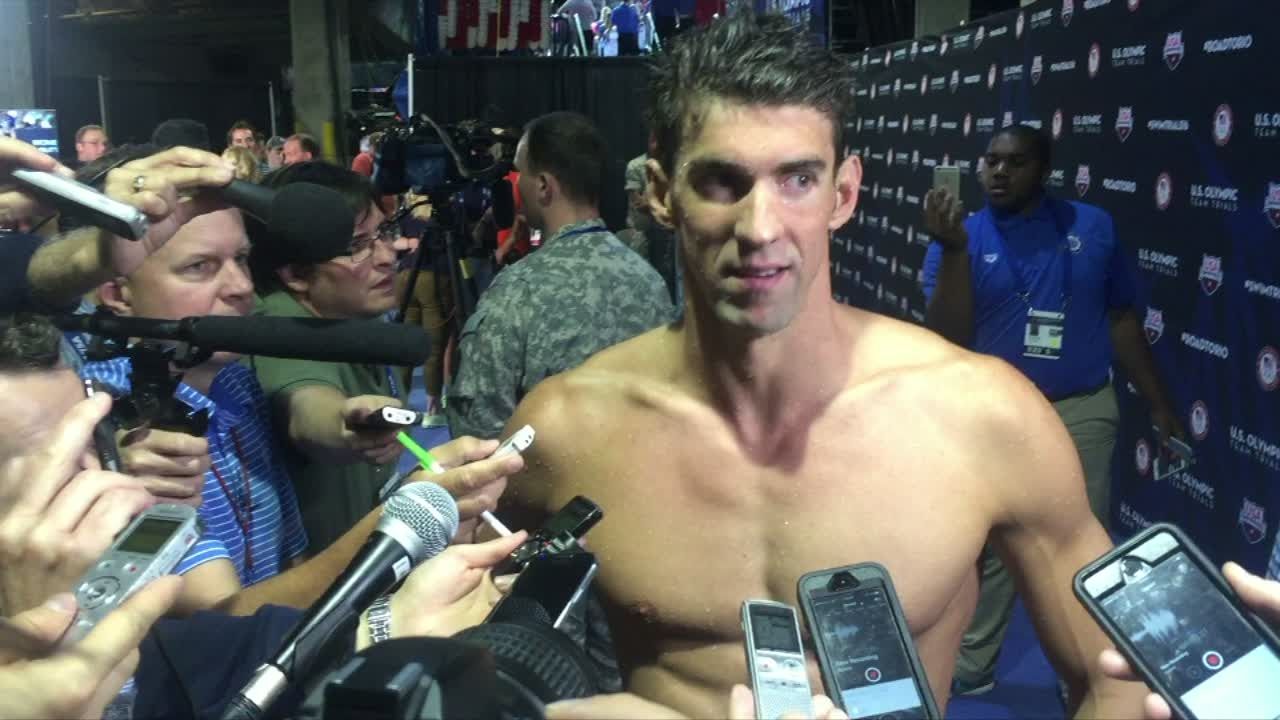 Phelps: 'Getting on the team was the most important thing'
Michael Phelps speaks after winning the men's 200-meter butterfly in a time of 1:54.84, qualifying him for the 2016 Rio Games -- his fifth Olympics.
Related topics:
sportsespnswimmingmichael phelpskatie ledeckymissy franklinolympic sportsolympicsrionews uk olympicsespnw
Copyright © 2021 ESPN Internet Ventures. All rights reserved.
More Videos
From CNN Newsource affiliates
TOP STORIES