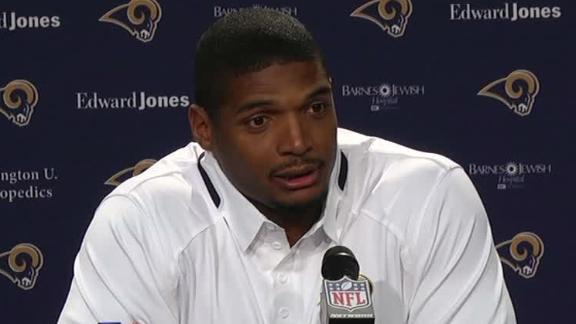 In the nearly three full days since, Sam hasn't taken much time to reflect on his status as the first openly gay player selected in the NFL draft.

But obvious and emphatic reminders surrounded Sam on Tuesday afternoon as one of the largest media contingents in the Rams' St. Louis tenure turned all eyes to him in his introductory news conference.

Throughout the course of the nearly 20-minute question-and-answer session, Sam made it clear his focus is on moving past the bright lights and cameras and on to making the 53-man roster.

"Right now I am just looking forward to continuing on my dream," Sam said. "And if it inspires other people, then, hey, I'm with you. Anyone that's not OK with that, if someone disowns you, hey, be a part of my family, I'll welcome you."

The Rams set out to use Tuesday's news conference as the first step in allowing Sam to continue that dream without having to worry about the intense media spotlight that has followed him since his landmark announcement on ESPN in February.

First, they wanted to address their decision to draft Sam. After introducing each of their 10 other draft picks, coach Jeff Fisher offered some background on the steps that ultimately led to choosing Sam.

General manager Les Snead followed, making it clear the franchise understood the importance of the decision and its place in history.

"All of us in our draft room were aware the decision would be a pivot in history," Snead said. "We started the maiden journey yesterday when Michael got here. As Coach Fish has said before on Kenny Washington being the first African-American to get into the NFL post-World War II, was signed by this organization.

"The nice thing when you Google Kenny Washington is [he's a] forgotten hero. What's nice about that is there's going to be a timeline here, and Michael is the first. Somewhere in the future, guess what? He's just going to be a name and a dot that some kid in middle school has got to memorize. We won't think it's anything special because it will be normal."

In his conference call with local media Saturday night, Sam said he believed he should have been taken in the first three rounds after earning the SEC's co-defensive player of the year award in 2013. Sam was asked Tuesday whether he thought his sexual orientation had anything to do with his fall to one of the draft's final picks.

Sam brushed off the question and made it clear he has no regrets about making his announcement and the attention that followed.

That team became the Rams, and Sam said they have welcomed him with open arms.

Sam spent Tuesday morning watching the veteran defensive linemen go through an offseason workout, and said each member of the group said hello to him and let him know it's time to get to work.

Sam's fellow rookies also offered no concerns about the attention that goes with having Sam as a teammate.

"Judge him by what he does on the field," tackle Greg Robinson said. "I think everybody wants to make his own decisions and, if that's the way he wants to live his life, I don't think it will interfere with football."

As for serving as a role model to others who will follow his path, Sam isn't rejecting the notion entirely so much as putting it off while he focuses on the tall order of making the Rams at their most crowded position.

"I will support all equality," Sam said. "It doesn't have to be just about gay rights. Right now I am focused on football. I will always support equality. Period. My job right now is to focus on football and making this team so I can help win championships."

From the bottom of my heart, thank you to everyone today. STL and my @STLouisRams family could not have made me feel more welcome.

Sam: 'Determined To Be Great'
Michael Sam addressed the media in St. Louis on Tuesday after becoming the first openly gay player selected in the NFL draft.