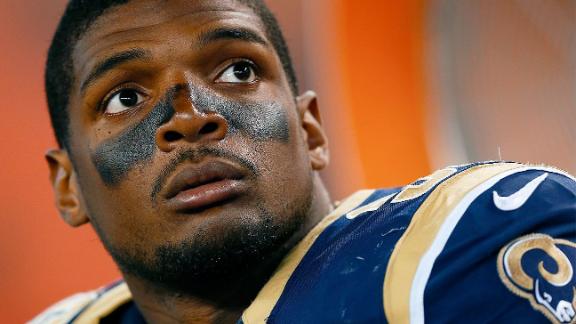 Michael Sam went unclaimed on waivers Sunday and is now free to sign with an NFL team's practice squad.

The defensive end was waived Saturday by the St. Louis Rams as they cut their roster down to the maximum 53 players for the 2014 season.

Sam became the first openly gay player to be selected in the NFL draft when he was picked by the Rams in the seventh round.

He had been battling undrafted rookie Ethan Westbrooks for a final roster spot. Westbrooks was one of nine defensive linemen to make the team.

Sam arrived at Rams Park on Sunday for a face-to-face exit meeting with Rams coach Jeff Fisher. The meeting was postponed a day so Sam could attend Missouri's opening victory over South Dakota State.

Sam tweeted thanks to the Rams on Saturday for giving him a chance to prove he can play in the NFL, saying in a series of tweets that he looks "forward to continuing to build on the progress I made here toward a long and successful career."

The most worthwhile things in life rarely come easy, this is a lesson I've always known. The journey continues.

- Michael Sam (@MichaelSamNFL) August 30, 2014On Saturday, Rams coach Jeff Fisher made no guarantees of Sam securing a spot on the team's 10-man practice squad because of the team's needs for more bodies at other positions.