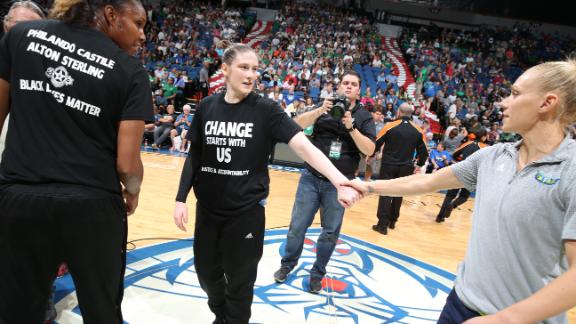 MINNEAPOLIS -- The Minnesota Lynx voiced their support for change.

The WNBA team wore black warm-up shirts that said on the front, "Change starts with us -- Justice & Accountability." On the back of the shirt are the names Philando Castile and Alton Sterling, who were both fatally shot by police officers this past week.

Castile was killed by a suburban St. Paul police officer during a traffic stop. Also on the back of the shirt is the Dallas police shield above the phrase "Black Lives Matter."

Before the Lynx's game against the Dallas Wings on Saturday night, captains Rebekkah Brunson and Maya Moore spoke in a news conference which the Lynx posted on their Facebook page. The two players were flanked by Minnesota's other captains, Lindsay Whalen and Seimone Augustus.

"If we take this time to see that this is a human issue and speak out together, we can greatly decrease fear and create change," Moore said. "Tonight we will be wearing shirts to honor and mourn the losses of precious American citizens and to plead for change in all of us."

Moore also spoke about the Dallas shooting, in which five police officers were killed, during the nearly five-minute news conference. She praised that city's effort on leading the way in "de-escalation training and other efforts that led to a noticeable drop in the number of shootings by officers in the last few years."