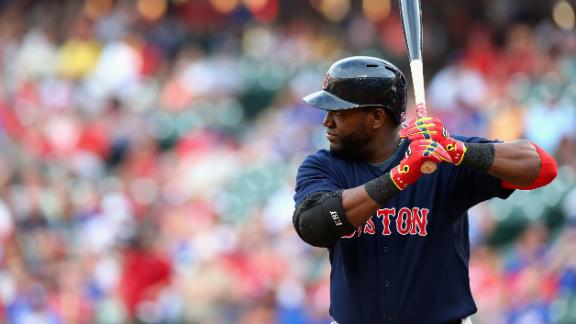 Major League Baseball has changed the call on a ball hit by David Ortiz in the seventh inning of Yu Darvish's near no-hitter last Friday from an error to a single.

The ball, which was hit in the air to right field and fell between second baseman Rougned Odor and right fielder Alex Rios, was initially ruled an error by official scorer Steve Weller.

The play ended Darvish's perfect-game bid but kept the Rangers' ace's no-hitter intact. Darvish carried the no-hitter through 8 2/3 innings, until Ortiz singled through the shift to end his bid.

Texas beat the Red Sox 8-0. After the game, Weller explained his decision.

"In my judgment, when the ball goes up in the air, I felt like the second baseman or right fielder under normal effort could have caught the ball," Weller said through a pool reporter. "Under the rule, 10.12a1, it clearly states that a fly ball that lands -- that's allowed to hit the ground, that in the judgment of the official scorer under normal effort could be caught -- you're to award an error on the play."

However, after reviewing the play upon Ortiz's request, MLB did not agree. A player or team must request a scoring play be reviewed for MLB to take a look.

As is routine on the numerous scoring appeals each week, the league didn't provide an explanation for the reversal.

It's expected that MLB will have internal conversations about whether the official scoring rules will be adjusted in the future to address plays similar to the Ortiz play.

The current rule on plays that would apply on plays like Ortiz generated -- Rule 10.12(a)(1), which states that, "The official scorer shall charge an outfielder with an error if such outfielder allows a fly ball to drop to the ground if, in the official scorer's judgment, an outfielder at that position making ordinary effort would have caught such fly ball" -- is open to broad interpretation. But typically, batted balls that have fallen untouched have almost uniformly have been ruled hits.

Darvish came within one out of a perfect game against the Astros early last season.

Information from ESPN The Magaine's Buster Olney and the Associated Press was used in this report.