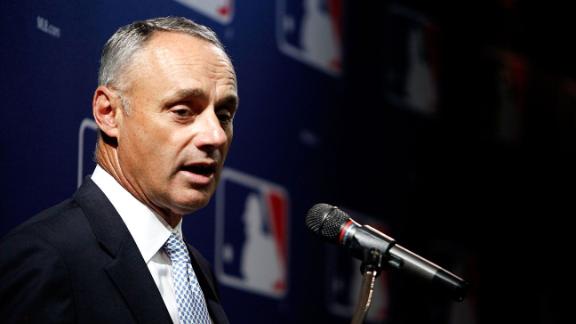 Major League Baseball says it has scheduled every game of the regular season's closing day to start at the same time because it hopes to elevate the excitement of the day, with five playoff spots now up for grabs in each league.

MLB chief operating officer Tony Petitti, speaking to the Los Angeles Times, said the league hopes to "maximize" the day in the event that multiple meaningful games go down to the wire.

"If a game impacts another game, they're all occurring at the same time, so no team would be put into a lame-duck situation because their fate already had been decided by an earlier result," Petitti told the newspaper.

"It's a cool little wrinkle," Dodgers outfielder Andre Ethier said, according to the Times. "It will definitely make games more exciting that day."

The simultaneous start also could disadvantage teams firmly in the playoff mix. Previously they could have reacted to the results of earlier games to determine which pitchers to start -- whether they needed to trot out their ace in an attempt to gain better seeding by clinching a division title, for example.

"If somebody is banged up, you can't risk resting him, because you haven't already seen the score of the other game," said catcher A.J. Ellis, whose Dodgers close out the season at home against theSan Diego Padres.

Said Petitti: "We're hopeful that the races will come down to the last day of the season. We want to make sure we celebrate the end of the season properly."