MLB manager watch: Who's out and latest on potential replacements

ESPN
By ESPN.com
While baseball's best teams prepare for what they hope will be a long run in October, the rest try to fix what went wrong -- and in some cases, that means replacing the manager.

Here's the latest on baseball's managerial merry-go-round: who's out, which vacancies are the most appealing and who might get the call.

Why he's out: Two years of mediocrity -- Is there any other way to describe going 80-82 a year ago and 81-81 this season? -- turned the fan base against the first-time manager. The signing of Bryce Harper and the arrival of J.T. Realmuto and Jean Segura meant that mediocrity was no longer expected -- or accepted. The collapse over the final two weeks of this season, a stretch in which the Phillies lost 9 of 12 -- including six in a row at one point -- looked remarkably similar to the fade at the end of 2018. A year ago, the Phillies stood 14 games over .500 on Aug. 17. They went 12-32 the rest of the way, including a nine-game losing streak late in September.

Why Philadelphia is a good job: The roster has plenty of talent -- Harper, Realmuto,Rhys Hoskins, Aaron Nola-- and management has proven it will spend money.

Why Philadelphia is a bad job: The division is loaded. The Nationals are in the NLCS. The Braves, despite what happened in Game 5 against the Cardinals in the NLDS, are good, evidenced by their 97-win season. The Mets, also searching for a manager, posted 86 wins. So whoever writes the lineup card for the Phillies next year will do so knowing nothing will come easily in the NL East.

Latest buzz: The Phillies are wasting no time, asBuck Showalter, Joe Girardi and Dusty Baker all will have second interviews in the coming days. That follows the script predicted by ESPN's Tim Kurkjian, who said the team will look for someone who has managed in a big-league dugout before.

Possible candidates: Baker, Girardi and Showalter seem to be the front-runners.

Why he's out: Despite a huge midseason turnaround and a nine-game improvement on last season, the season was a disappointment after new GM Brodie Van Wagenen's grand scheme fell flat. Callaway was a holdover from the previous administration and in mid-May, with the Mets seemingly in chaos after a five-game losing streak that included back-to-back shutouts against the hapless Marlins, his obit was already was being written. The second-half surge couldn't change the narrative.

Why New York is a good job: The Mets have the makings of one of the best rotations in baseball and a superstar folk hero in rookie slugger Pete Alonso, plus young hitters Jeff McNeil, Brandon Nimmo and J.D. Davis. The resources are there to invest in more talent but ...

Why New York is a bad job: Whether the current ownership and front office can be trusted to spend wisely is an open question. And the financial flexibility could be limited -- in 2020, the Mets are on the hook for $129 million to Yoenis Cespedes, David Wright, Robinson Cano, Jacob deGrom, Jed Lowrie, Wilson Ramos and Justin Wilson.

Latest buzz: According to reports, the Mets' first interview was with Carlos Beltran, with Joe Girardi expected to meet with team officials and ESPN's Eduardo Perez also having a sitdown with the team.

Why he's out: In the heady days of 2016 after the Cubs' first World Series championship since 1908, it was easy to imagine more titles coming in the very near future and a bronze statue of Maddon being placed outside Wrigley Field. But, three seasons later, there are no more rings (in fact, just one postseason series win) and a pink slip for Maddon, the fall guy for a team that has underachieved during a post-championship stretch that has been disappointing. The Cubs' front office feels it's time for a new voice.

Why Chicago is a good job: Although the roster is flawed, the Cubs still are loaded with talent (hence the feeling they have underachieved the past three years). It's one of the sport's premier franchises in one of the country's biggest markets with one of the game's wealthiest owners.

Why Chicago is a bad job: The Cubs have one of the top payrolls in baseball, but there seems to be little appetite to extend it further, which could limit the flexibility to improve this offseason. The Cubs are no longer lovable losers, and a taste of victory has ramped up not only the appetite of fans for more but the pressure on the manager and the rest of the team. There's not much help coming from the farm anytime soon.

Latest buzz: Recently deposed Phillies manager Gabe Kapler and Astros bench coach Joe Espada will interview with the Cubs, bringing the number of candidates to six. David Ross, Joe Girardi, Cubs bench coachMark Loretta and Cubs first-base coach Will Venable have already discussed the job with the team. One source indicated to ESPN's Jesse Rogers thatKapler and Espada could be the final candidates, and industry sources have indicated for some time that Ross is the front-runner.

Why he's out: Four years removed from three consecutive wild-card appearances, the club is faced with the prospect of an extended rebuild with attendance already in the dumper after the team's high-profile trades -- shipping out stars such asGerrit Cole and Andrew McCutchen or bringing in Chris Archer -- didn't keep the Pirates anywhere close to contention.

Why Pittsburgh is a good job: For a skipper ready to ride out that rebuild, there's some talent to work with. The lineup has a few major building blocks in place, such asJosh Bell and Starling Marte, and has talent on the rise. The pitching staff provides some tantalizing possibilities for candidates ready to wait out the recoveries from surgery of Jameson Taillon and Chad Kuhl, or for anybody who has a good idea for how to get Archer back to ace-grade performance.

Why Pittsburgh is a bad job: Will the ownership group ever really invest in keeping the best talent the team develops? GM Neal Huntington worked with Hurdle to milk the organization's modest peak with a decent core in 2013-15, but didn't have the time or money to build upon or even just sustain that. The Pirates' track record for developing their homegrown pitching talent is not good.

Latest buzz: Hurdle opted to not manage on the final day of the season after he found out the team was heading in another direction. The future shape of the coaching staff will depend on who gets brought in to manage.

Possible candidates: This has a good chance of being an opening stocked with a first-timer instead of dipping into the MLB managers recycling bin, but one name who would be a natural fit is Jeff Bannister, who is a Pirates lifer save for his four seasons as Rangers manager (2015-18). He was Hurdle's bench coach from 2011 to 2014 and was a baseball operations special assistant this season.

Why he's out: Yost, who led the Royals to their only World Series title in 2015, announced on Sept. 23 that he is retiring at the end of the season. He is the longest-tenured and winningest manager in franchise history.

Why K.C. is a good job: New ownership could mean a change in the low-payroll practices that have helped keep the Royals firmly entrenched in the second division for the vast majority of the past 25 years. Of course, it's still a small market, so that is no guarantee.

Why K.C. is a bad job: Yost's run of success from 2013 to 2015 is quite the outlier. Other than those years, the Royals have had just one winning season since 1995. Despite all the losing, most of the team's top prospects are still at least a year or two away. On the plus side, Bobby Witt Jr., the No. 2 overall pick in this year's draft, is a top-25 prospect.

Latest buzz: The ink wasn't even dry on Yost's retirement announcement before chatter stirred about former Cardinals manager Mike Matheny being the front-runner to replace him. Actually, that began in November, when Matheny was hired by the Royals as a special adviser. But that move was under outgoing owner David Glass. The plans of the group headed by John Sherman, which won't take over until MLB owners approve the sale, remain to be seen.

Why he's out: With expectations raised this year after the signing of Manny Machado and the elevation of some touted prospects (including Fernando Tatis Jr. for 84 games before he was hurt), San Diego sagged in the second half, going 24-40 under Green after the All-Star break. With $300 million invested in Machado and one of the most dynamic young players in the game, the Padres rightfully expect more in 2020 and beyond.

Why San Diego is a good job: Tatis heads one of the best groups of young players in the game, with more on the way. The team was .500 in the first half, and momentum seemed to be building at times. Plus, we hear the weather is nice.

Why San Diego is a bad job: There is no tradition of winning -- the Padres have gone 13 years without making the playoffs -- so that must be established. The Dodgers are in the NL West, and they figure to be a tough hill to climb for at least the next few years. The Padres also need a front-line starting pitcher and rotation depth to be a legitimate contender, but that is at the top of GM A.J. Preller's to-do list.

Latest buzz: Braves third-base coach Ron Washington managed the Rangers when Preller was in the Texas front office so his name has been on the rise. Washington and Rangers player development coach Jayce Tingler both will have second interviews, according to multiple reports, so they appear to be the two finalists, at least for the time being.

Why he's out: Bochy announced in February that he was retiring after the season.

Why San Francisco is a good job: The front office, led by Farhan Zaidi, is well-respected, and the Giants have kept their payroll high enough to be a consistent contender. It's a cornerstone franchise with a solid, supportive fan base.

Why San Francisco is a bad job: The major league roster is not good, and rotation mainstay Madison Bumgarner will be a free agent and seems likely to sign elsewhere. A pretty significant rebuild is due, and the Giants' farm system was 26th in Keith Law's rankings entering the 2019 season.

Why Ausmus is out: The chief reason ultimately may have been Maddon's availability, given the former Cubs manager's pedigree and long ties with the Angels organization. But L.A.'s disappointing record in 2019 didn't help, even though Ausmus had to contend with (Tyler Skaggs' death, numerous injuries, free-agent flops).

Why L.A. is a good job: Well, there's this guy named Mike Troutwho's pretty darn good and is tied up contractually for what could be the rest of his career. Then there's Shohei Ohtani, whose two-way talents would be a fun toy for any manager. It's a big market, not quite as glamorous as the Dodgers but a team that has been willing to spend in the past.

Why L.A. is a bad job: Beyond Trout and Ohtani, there's not a ton to love on the major league roster, particularly on the pitching staff. As long as ownership is willing to go hard after a top arm or two in free agency (Gerrit Cole, perhaps?), the Angels should be able to contend. But if they don't bolster their rotation significantly, they could continue to tread water. 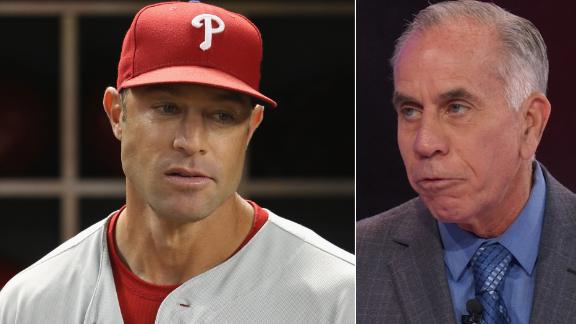 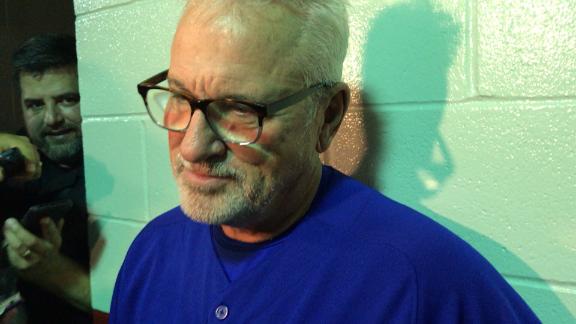 Maddon reflects on his time with the Cubs
After his final game as the Cubs manager, Joe Maddon is proud that he's been able to hold back his emotions and talks about the "life changing" experience he's had with the ball club. 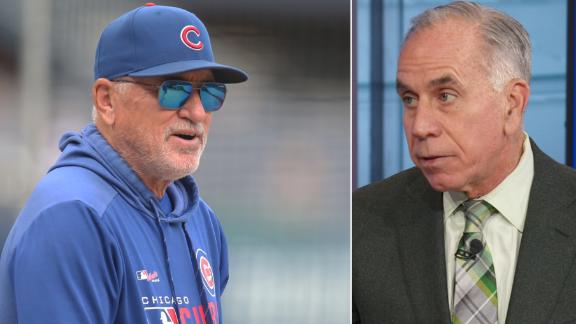