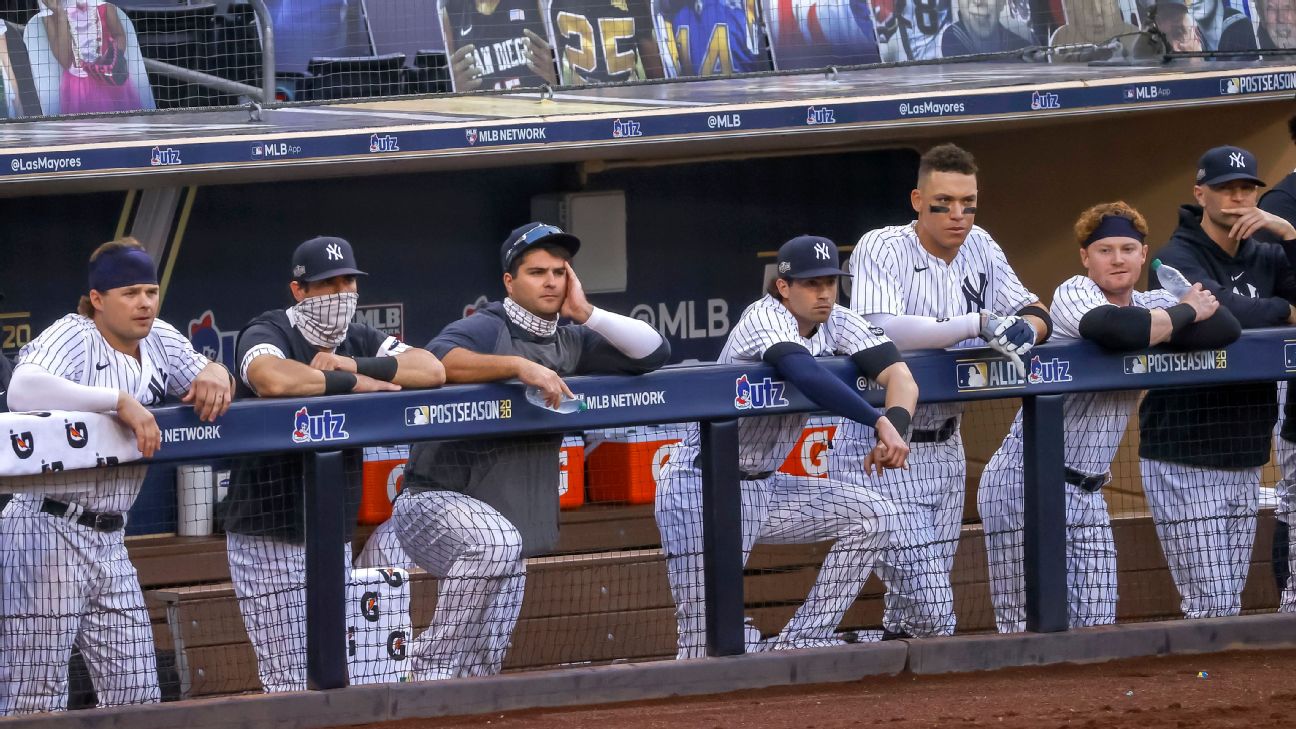 The Oakland Athletics were able to fend off elimination Wednesday -- and they'll have company on the postseason tightrope Thursday. The A's, Miami Marlins, New York Yankees and San Diego Padres all will be playing for their playoff lives, meaning the division series round could be complete by early Friday morning.

Here's everything you need to get ready for another quadrupleheader, including a look at all four matchups, the numbers you need to know, our scorching hot take of the day and more.

All times Eastern; all series best-of-five played at neutral sites

Could the postseason Marlins be beatable after all? The franchise that set a record by winning its first seven playoff series is one loss away from tasting October defeat for the first time. After being shut out in Game 2, Miami will have to get its bats going against a Braves team with three shutouts in four postseason games, although Atlanta's starter, Wright, hasn't pitched since Sept. 25. The Marlins turn to Sanchez, who blanked the Cubs over five innings in a wild-card-round win. -- Steve Richards

The A's rallied from a 7-4 deficit to keep the series alive Wednesday and now things get really interesting, especially with Zack Greinke battling a sore arm and unable to start for the Astros. Cristian Javierprobably gets the ball after pitching one inning in relief in Game 2, but expect both teams to churn through their bullpens. A's closer Liam Hendriks threw 37 pitches in working the final three innings on Wednesday, but remember that against the White Sox he threw one inning the day after throwing 49 pitches, so he should be available for at least three outs, and maybe four or five. The A's are still in good shape in the bullpen: Joakim Soria, J.B. Wendelken and Lou Trivino didn't pitch in Game 3, andJake Diekman threw 20 pitches but didn't pitch in Game 2. Plus, Montas is a good matchup for the righty-heavy Houston lineup, as Montas held righties to a .198 average and .572 OPS (compared to .350 and 1.061 versus lefties). I see this one going five. -- David Schoenfield

The Yankees turn to Montgomery and they're obviously desperate for him to go reasonably deep into the game. The Yankees generally are loathe to use Aroldis Chapman for two innings, but he did pitch two scoreless against Cleveland in the wild-card round (an efficient 24 pitches), so Aaron Boone might consider counting on four innings between Chapman and Zack Britton, although that's rolling the dice a bit and he'd still have to worry about Game 5. Montgomery finished with a 5.11 ERA in his 44 innings, but there were actually a lot of positives: 47 strikeouts to only nine walks and a hard-hit rate that ranked in the 88th percentile. But all seven of the home runs he gave up came from right-handed batters, suggesting the Rays will stack their lineup -- making it possible Boone will do the same thing he did in Game 2 and pull Montgomery in favor of Deivi Garcia as a long man. Or maybe the Yankees will just bash their way to victory. -- Schoenfield

What will these guys do for an encore? Wednesday night's Game 2 will be tough to beat. The Padres were one of the feel-good stories of the postseason. But when your two best starting pitchers don't feel good, you won't be in the postseason for long. That's the situation San Diego is in, as the Padres -- minus Dinelson Lamet and (essentially) Mike Clevinger -- are staring at a 2-0 hole against the mighty Dodgers. But based on what we saw Wednesday, the Padres won't go down easily -- or quietly. It says here there are some fireworks left between these teams. Stay tuned. -- Richards

Updated odds for every series

Hot take of the day

The Yankees are done.

We forgot one thing though: The Yankees have zero pitching depth. They have maybe three reliable pitchers in Gerrit Cole, Zack Britton and Aroldis Chapman. Masahiro Tanaka has been a postseason hero in the past, but not this year, with two bad starts. Chad Green is usually pretty good, but Michael Perez tagged him for a two-run home run in Game 3. Plus, the Rays have like seven Chad Greens in their bullpen.

Of course, the Rays also have the best player on the planet in Randy Arozarena, who had three more hits, including a home run. (How did the Cardinals trade this guy?) Rays in four. --Schoenfield

The balls have been flying out of Dodger Stadium for the Astros-A's series: 18 home runs over the first three games, including seven in Game 3 on Wednesday. That's the most homers ever through three games in a postseason series. Each member of the A's starting infield -- Marcus Semien, Tommy La Stella, Matt Olson and Chad Pinder -- homered Wednesday, the first time that has happened in postseason history.

Cody Bellinger hit one home run and robbed another, and the Dodgers survived an ugly ninth-inning outing by Kenley Jansento win 6-5and take a 2-0 series lead on the Padres in an emotional thriller. ... Facing a 7-4 deficit (and postseason elimination) after six innings, the A's rallied to tie it in the seventh on a Chad Pinder three-run homer, took the lead in the eighth and closed things out old-school style, with Liam Hendriks pitching the final three innings of a 9-7 win over the Astros. Hendriks gave up only one hit, struck out four and threw 26 of this 37 pitches for strikes. ... The Rays knocked the Yankees on their heels8-4, slugging three home runs to take a 2-1 series lead. Giancarlo Stanton homered in his fifth straight game for New York. ... The power duo of Travis d'Arnaud and Dansby Swanson each homered for the second straight day, backing another sparkling outing by Ian Anderson as the Braves pushed the Marlins to the brink of elimination 2-0.

Best moment of the MLB playoffs to date

The stage was set for another Fernando Tatis Jr. moment, but Cody Bellinger snatched it away. Bellinger's home run robbery, plucking what would have been a go-ahead shot by Tatis in the seventh inning, kept the Padres at bay -- barely -- and will take its place in Dodgers lore, particularly if L.A. wins it all

The Rays'Randy Arozarena. What has this guy not done this postseason? Through Game 3 against the Yankees, Arozarena is 12-for-20 with three home runs and six extra-base hits in five postseason games. His list of accomplishments:

He joined Ichiro Suzuki (2001) as the only rookies to produce three games with three or more hits in a single postseason.

He is the third rookie with a home run in three consecutive games in postseason history, joining Evan Longoria (four in 2008) and Kyle Schwarber (three in 2015).

He joins Juan González (four in 1996) and Bengie Molina (three in 2005) as the only players to homer in three straight postseason games against the Yankees. 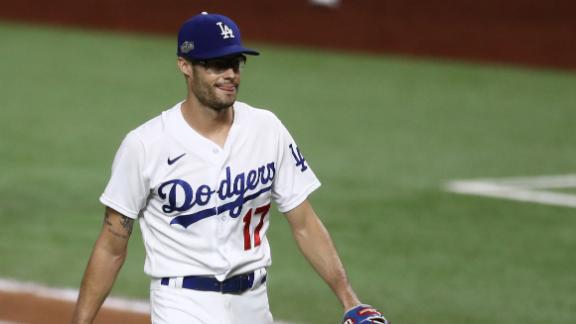