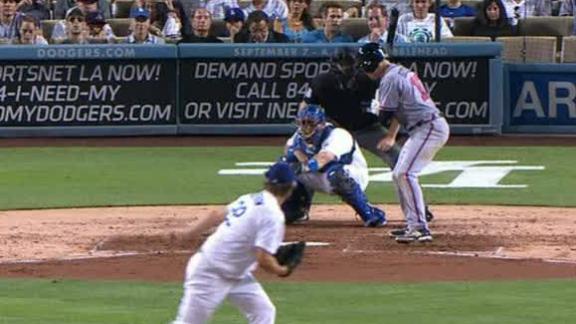 With offense on the decline and strikeouts at an all-time high, Major League Baseball is looking into shrinking the strike zone, according to a Yahoo! Sports report.

Any formal rules change would have to be approved by baseball's Playing Rules Committee. The committee will monitor the strike zone this season and potentially look to implement changes in 2016 at the earliest, Yahoo! reports.

The largest part of that expansion is in the lower area of the strike zone, with umpires more frequently signaling strikes for pitches below the kneecap. Low pitches are generally considered more difficult to handle for batters, most of whom have a tougher time driving the ball when reaching down for it. Not surprisingly, the walk rate across the majors is down while the strikeout rate is up.

Another key factor in the trend toward dominant pitching and away from prolific hitting is a steady increase in the called strike rate. The current rate of called strikes is nearly 15 percent higher than it was in 1988, according to Grantland.com's Ben Lindbergh.

Several factors are thought to contribute to this increase.

The use of pitch-tracking technology -- initially with the installation of QuesTec cameras in major league ballparks and now with the current PITCHf/x system -- has had a two-fold effect. One, umpires' strike zones have become more consistent with one another; two, umpires have collectively gravitated toward a strike zone more in line with the rulebook definition -- in practice it has become broader top-to-bottom, albeit a bit narrower side-to-side.

The last time MLB officially changed the definition of the strike zone came after the 1996 season, when the boundary for the bottom of the zone was lowered from the top of the batter's knees to the bottom.

An unofficial tweak came after the 2000 season, when umpires were instructed to call the high strike in accordance with the rulebook, which defines the upper boundary as "the midpoint between the top of the shoulders and the top of the uniform pants."