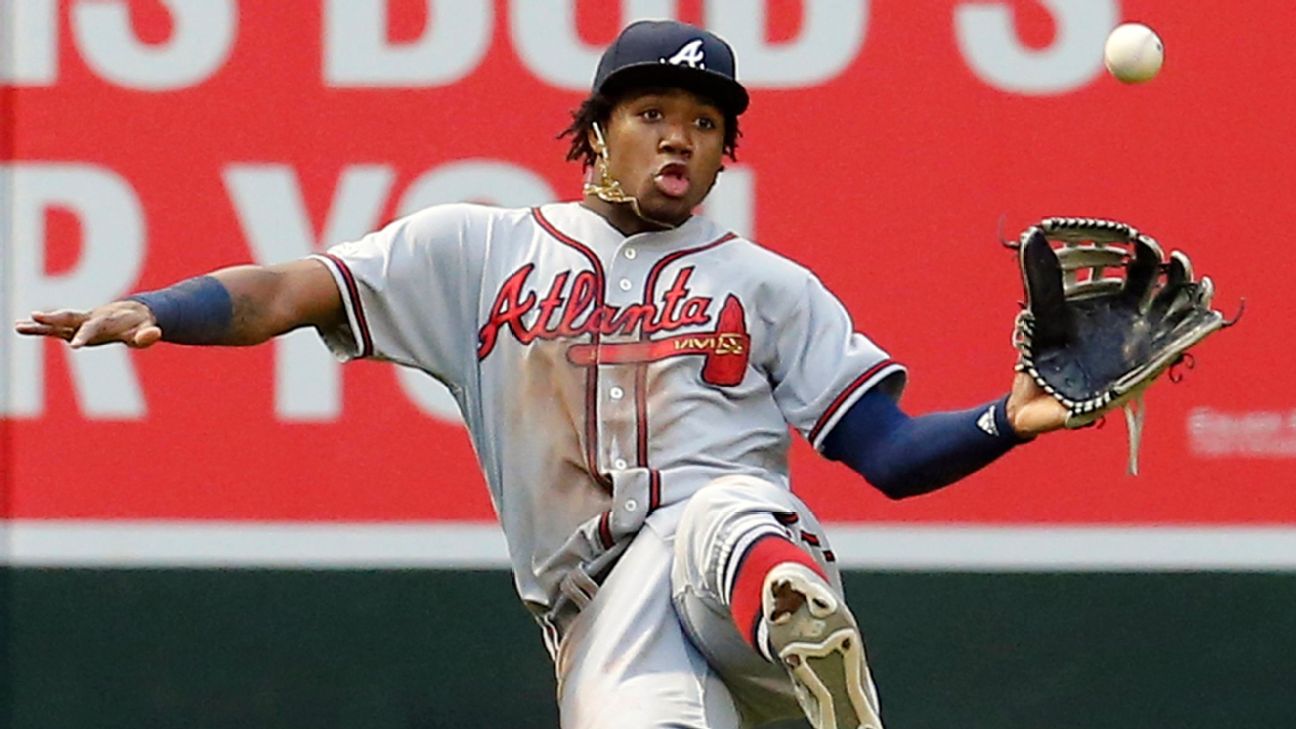 The Orioles are giving up home runs at a historic rate, the Braves and Cardinals will be squaring off in a premium matchup between potential playoff teams, and the latest Dodger with a scoreless inning streak will put his chance to make history on the line.

Here's how we see those matchups and what else we're looking forward to:

Sunday Night Baseball (ESPN, 7 p.m. ET) features a pair of playoff contenders, with the Atlanta Braves facing the St. Louis Cardinals. Which of those teams is more likely to make the postseason?

Eddie Matz: I'm nowhere near as smart as the folks who run sites like FanGraphs, Baseball Prospectus and Baseball Reference. Averaging out the playoffs odds on all three sites, the Braves have a 63 percent chance of making the postseason. The Cards are at 48 percent. I'll side with the wise guys and take Atlanta.

Sam Miller: I will admit that I have, like most baseball fans, occasionally overrated the benefits of youth over experience. But this has been a young players' league for the past couple of years, and the Braves -- with the National League's youngest pitching staff and tied for the second-youngest lineup -- fit the moment better than the veteran Cardinals, some of the most veteran of whom are struggling under the weight of age. Anyway, somebody's got to pick up the playoff odds for the listing Nationals and Mets.

David Schoenfield: The Braves still have 13 games remaining against the Marlins. The Cardinals do not. More importantly, the Cardinals' rotation has really struggled and the team has allowed the second-most home runs in the National League. Meanwhile, the Braves have received strong performances so far from Mike Soroka and Max Fried. With the Nationals playing poorly and the Mets scuffling along, the Braves can take advantage of a mediocre NL East.

Speaking of playoff contenders, the Cleveland Indians host the Tampa Bay Rays this weekend. Will the Tribe, which haven't won more than two straight in nearly a month, get their act together and make the playoffs?

Matz: The Twins are legit, so winning the Central seems like a long shot for Cleveland. Snagging a wild card won't be easy, either, as the Indians likely would need to finish ahead of either the Yankees, Red Sox or Rays. Francisco Lindor has finally found his groove, but Jose Ramirez hasn't. So ... can the Tribe make the playoffs? Absolutely. But it sure would help if Ramirez starts producing like his top-five-finish-in-MVP-voting self.

Miller: Probably not, and the front office might figure it's not even worth fighting that hard for a wild-card spot. I'm not all the way convinced Lindor really has found his groove, either. He's so good, he could be an All-Star (if not an MVP candidate) at three-quarters speed; the problem is, according to Statcast's sprint speeds, that isn't that far off.

Schoenfield: The Twins absolutely look like the real deal and have indicated they have payroll room to add something at the trade deadline as needed. You think the Indians will make a big move? Unlikely. Yes, they'll get Mike Clevinger and Corey Kluber back at some point, but right now I'd pick the Twins to win the division and the Indians to battle for -- and fall short of -- a wild-card spot.

The season's two most highly touted rookies -- the Toronto Blue Jays' Vladimir Guerrero Jr. and the San Diego Padres' Fernando Tatis Jr. -- are in Toronto this weekend. Beyond that pair, there have been numerous impact rookies this year. Who has impressed you the most?

Matz: Pete Alonso is on pace to hit 54 homers, which is pretty dang impressive for anyone, much less a rookie. But I'm reasonably certain that in MLB's current offensive climate, my fourth-grade son could hit 54 bombs. I'm infinitely more impressed by pitching prowess these days. What Mike Soroka has done -- he has surrendered just one homer and hasn't allowed more than one earned run in any of his seven starts -- is just plain crazy.

Miller: I'll take it on faith that David, who said last week he was going to rename his dogs -- rename! give them new names! -- after Chris Paddack, will take care of that response next. I've been in awe of Tampa Bay rookie Brandon Lowe's swing. He's not big, doesn't look imposing, but he hunts for early-count strikes and has a knack for pulling and elevating anything in the zone. That's not the right approach for every hitter, but it's working for Lowe.

Schoenfield: Of course, I have to mention Soroka and Paddack here, two keys to my current first-place fantasy team. What, you don't want to hear about that? Sorry. Oh, Yusei Kikuchi is on my team as well and he's been a solid rookie starter, although obviously he isn't a rookie in the traditional sense. Maybe the most surprising/impressive rookie performer has been Michael Chavis of the Red Sox. We knew he had big-time power potential, but he also had an 80-game PED suspension last season and a high strikeout rate. We also didn't expect to see much of him, as he was buried behind Rafael Devers on the depth chart at third base. He has kept his strikeouts relatively intact, but most impressively he has played a solid second base after playing mostly third base in the minors.

You guys aren't rookies, but you're certainly impressive. What's on top of your weekend must-see list?

Matz: In the past 100 years, there have been six players who have had at least 50 steals and 100 RBIs in the same season (Barry Bonds did it most recently, in 1990). Adalberto Mondesi is on pace for 56 and 132. With seven triples already, he's also on pace for 23 of The Most Exciting Play In Baseball. There has only been one guy in MLB history to ever record 20 triples, 50 steals and 100 RBIs in a single season. (Hint: his name rhymes with Schmy Schmobb.) All of which is to say, I'm going to pay a little extra attention to the Royals.

Miller: Domingo German is going for his 10th win and it's still May. Wins aren't my stat, but my inner 8-year-old still loves to see a ludicrous win-loss record now and again, so I'll be watching Sunday to see if German can improve to 10-1 and stay on pace for an extremely unlikely 30-win season. (Heck, I'd take 29.)

Schoenfield: I'm developing a disturbing fascination with all the home runs the Orioles are allowing. Entering Thursday's game against the Yankees, they've allowed 105 home runs in 49 games, a season pace of 347. That's almost incomprehensible. It would be like Bob Beamon long-jumping 29 feet, 2 inches at the 1968 Olympics, completely destroying the previous record. And this weekend? The Orioles play in Denver. Protect the kids.

Dodgers lefty Hyun-Jin Ryu brings a streak of 31 consecutive scoreless innings into Pittsburgh. Closest to the pin: How long will Ryu's streak last?

Matz: Four of the 10 longest streaks in the live ball era belong to Dodgers: Hershiser, Drysdale, Greinke, Kershaw. Ryu needs 10 more innings to break into that top 10 and become the fifth Dodger. He'll get eight against the Pirates, seven against the Mets after that, and then lose it in the first inning at Arizona. So let's call it 45 innings, tying him with Carl Hubbell for fifth longest.

Miller: I've been debating with a friend about how many innings it takes for a scoreless streak to become must-watch. I say 32 -- since then he's only, theoretically, three outings away from Hershiser -- but my friend insists it's at least 35, since nobody goes nine innings anymore. Anyway, enough stalling: The Pirates have been the fourth-worst offense in baseball against lefties this year, so I'll be optimistic and say he goes six scoreless and gives me and my friend the right to get hyped.

Schoenfield: I say Josh Bell goes yard and ends the streak at 36 innings.

The Orioles are giving up home runs at a record pace (and then some). This weekend they're in the thin air at Coors Field, a potentially volatile combination. Over/under for home runs allowed by the Orioles this weekend at Coors: 6.5

Miller: I reject Eddie's implied home/road distinction for the Orioles' prodigious dinger-allowing rate. I believe in their ability to allow homers in any park, and certainly in Coors. The Orioles have allowed five or more homers in a game seven times this year, and I really only need one of those to nearly guarantee the over. So I'll take the over.

Matz: Both starters (Jack Flaherty and Julio Teheran) have been much better at home this season. In related news, this game will take place in The Lou. Dame los Cardenales, por favor.

Miller: I like Flaherty so much that I refuse to ever look at his stats. He's a star. I know it. I don't need "proof" or even "supporting evidence." I bet his ERA is, like, 1.60. I'll take the Cardinals.

Schoenfield:Flaherty is the scheduled starter for St. Louis and I keep waiting for him to roll out three or four dominant starts in a row, but he hasn't found a consistent groove yet and walked five Braves two starts ago. Teheran, meanwhile, has allowed just two runs over his past four outings. I'll go with the hot hand and pick the Braves.

Each week, we ask our panelists to choose one hitter they think will hit the most home runs and one pitcher they think will record the most strikeouts in the coming weekend. Panelists can pick a player only once for the season. We'll keep a running tally -- and invite you to play along at home.

Schoenfield: Dang, I already used Trevor Story, and Sam beat me to Arenado. We're on the same page here.Charlie Blackmonis dinged up, so I guess that leaves me with ... Ian Desmond? (And, yes, I might pick against the Orioles the rest of the season.)