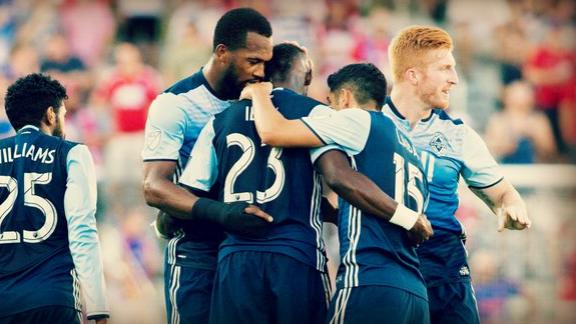 FC Dallas tumbled off the top spot in the Western Conference after being stunned 4-0 at home by the Vancouver Whitecaps on Saturday.

Bernie Ibini and Fredy Montero had already put the Whitecaps up 2-0 when Carlos Gruezo was sent off before the hour mark, and Montero soon added his second before Nicolas Mezquida also scored.

Australia international Ibini scored his first MLS score in the 18th minute with a bouncing shot from distance, and two minutes into the second half Kellyn Acosta conceded a controversial penalty that Montero converted to double the lead.

Gruezo was sent off for a straight red card in the 58th minute when he tried to climb over the back ofYordy Reyna, then hit the Vancouver man with an elbow to the face after they fell to the pitch.

Montero coolly slotted away his second in the 67th minute, butMezquida stole the show in the 83rd with a bicycle kick from a tight angle.

Sporting Kansas City took advantage of Dallas' defeat to move into first place in the West with a 3-2 win over the Chicago Fire.

Daniel Salloi opened the scoring for SKC on the counterattack in the 23rd minute, only for Chicago to tie it five minutes later after an unfortunate Matt Besler own goal.

However, Benny Feilhaber restored the lead in first-half stoppage time with a spectacular bicycle kick on the goal line afterLatif Blessing saw his point-blank header saved.

Salloi then set up Blessing to make it 3-1 six minutes after the break, and though David Accam cut it to 3-2 in the 78th minute with his 12th goal of the season, Chicago could not find an equaliser.

Stefan Frei had four saves for his seventh shutout of the season and the Seattle Sounders played the LA Galaxy to a 0-0 draw in coach Sigi Schmid's return to coaching in MLS.

Schmid coached Los Angeles from 1999-2004, winning the Supporters' Shield and MLS Cup in 2002. He coached the Sounders from their MLS inception in 2009 until he and the club mutually parted way on July 26, 2016. Seattle went on to win the MLS Cup.

Brian Rowe had two saves in his second shutout of the season. He had nine clean sheets, third most in MLS, last season.

Seattle had its three game win streak snapped, but is unbeaten in its last six.

Los Angeles played the final several minutes a man down after Jelle Van Damme was ejected following his second yellow card in the 86th minute. The Galaxy, winless in their last six, had lost five straight.

Hector Villalba scored for Atlanta United in stoppage time to cancel out Kaka's wonder goal in a 1-1 draw with Orlando City.

Kaka opened the scoring for Orlando in the 40th minute, sending a first-timed blast past Atlanta goalkeeper Brad Guzan from 25 yards out.

But Yamil Asad played in Villalba with a through ball in the 92nd minute and the Argentine scored to salvage a point for expansion Atlanta with another clutch goal, after last week's 86th-minute winner at Orlando.

Dom Dwyer played 72 minutes but did not take a shot in his Orlando City debut after arriving from Sporting Kansas City on Tuesday in an MLS-record $1.6 million deal.

It was the final game in Georgia Tech's Bobby Dodd Stadium for Atlanta, who will go on the road for the next three games before opening Mercedez-Benz Stadium on Sept. 10.

Royer opened the scoring with a 23rd-minute penalty after drawing a foul from goalkeeper Maxime Crepeau, andMichael Murillo tapped home his first MLS goal early in the second half.

The game was well in hand when Bradley Wright-Phillips acrobatically got on the end of an Alex Muyl cross, and there was still time for Royer to add a fourth in the 89th minute.

Kei Kamara provided two goals to help the New England Revolution ease to a 3-0 home win over the Philadelphia Union.

Kamara used a high boot to knock in a pass from Kelyn Rowe in the 35th minute to put New England ahead, before turning in an Andrew Farrell cross for his second with five minutes to play.

Juan Agudelo added a third from a header in the 89th minute header to complete the Revs' second straight victory and went level on points with their opponents in eighth place in the Eastern Conference.

Diego Valeri had a goal and an assist, but the Portland Timbers were pegged back late and settled for a 2-2 draw at the Houston Dynamo.

Valeri turned a cross into the roof of the net to open the scoring in the 12th minute, but the hosts got back level in the 37th when Timbers keeper failed to clear a cross and pounced to equalize.

But though Valeri set up Sebastian Blanco to restore the Timbers' lead before half-time, headed home from a set piece in the 81st minute to salvage a point.

Ramirez slipped behind the D.C. defense and put away a half-volley off a long, arcing pass from Kevin Molino for the first goal in the seventh minute to end Minnesota's goal drought at 358 minutes.

Abu Danladi first-timed a feed from Molino just inside the post in the 40th minute and Jared Jeffrey's own goal put Minnesota up 3-0 in the 58th before Miguel Ibarra added another goal in stoppage time.

United has lost six in a row -- the longest such streak since losing a franchise-record seven straight in 2013 -- and has been outscored 17-6 during that stretch.

Nick Limascored the only goal as the San Jose Earthquakes beat the Colorado Rapids 1-0.

Lima received the ball well outside the box following a corner and let fly from 25 yards out to score in the 59th minute.

San Jose moved within a point of the final playoff spot in the West, while the Rapids remained at the bottom.

Kamara had put Columbus ahead in the 15th minute after RSL failed to clear the ball, but early in the second half the hosts were level again after Joao Plata converted a penalty following a Josh Williams handball.

Jefferson Savarino then put RSL ahead in the 53rd minute as he ran in on goal on the counterattack, but Kamara had the final say eight minutes later, lashing home afterEthan Finlay's open shot at goal came back to him off the crossbar.

LA Galaxy 0-0 Seattle: Chances scarce
Sigi Schmid's return was a lackluster affair, as his LA Galaxy played to a scoreless draw with his old club, Seattle.

Houston 2-2 Portland: Dynamo pull out draw
Juan Cabezas netted late for the Houston Dynamo to steal a point against the Portland Timbers. 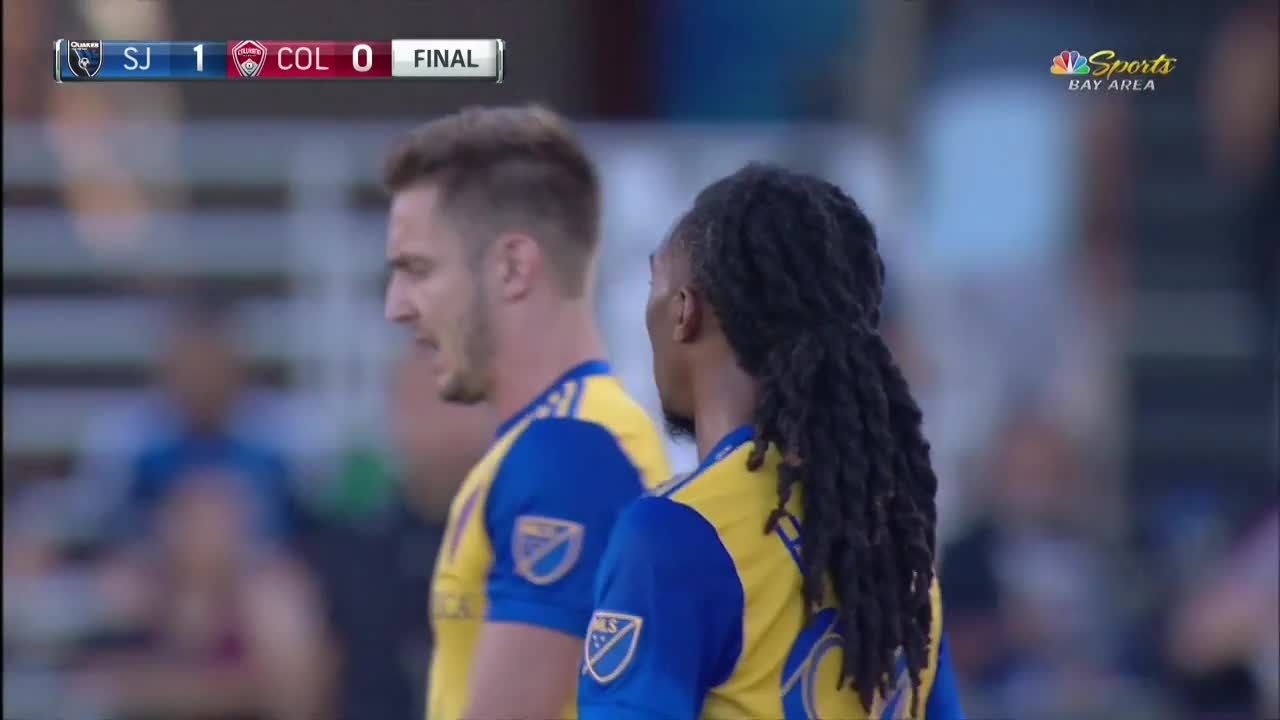 Earthquakes 1-0 Colorado: Lima's wonder strike - Via MLS
Nick Lima scored a wonder goal from outside the penalty area to secure a 1-0 win for San Jose.