Mo Bamba: Jump straight to NBA from high school would have 'taken game to next level' 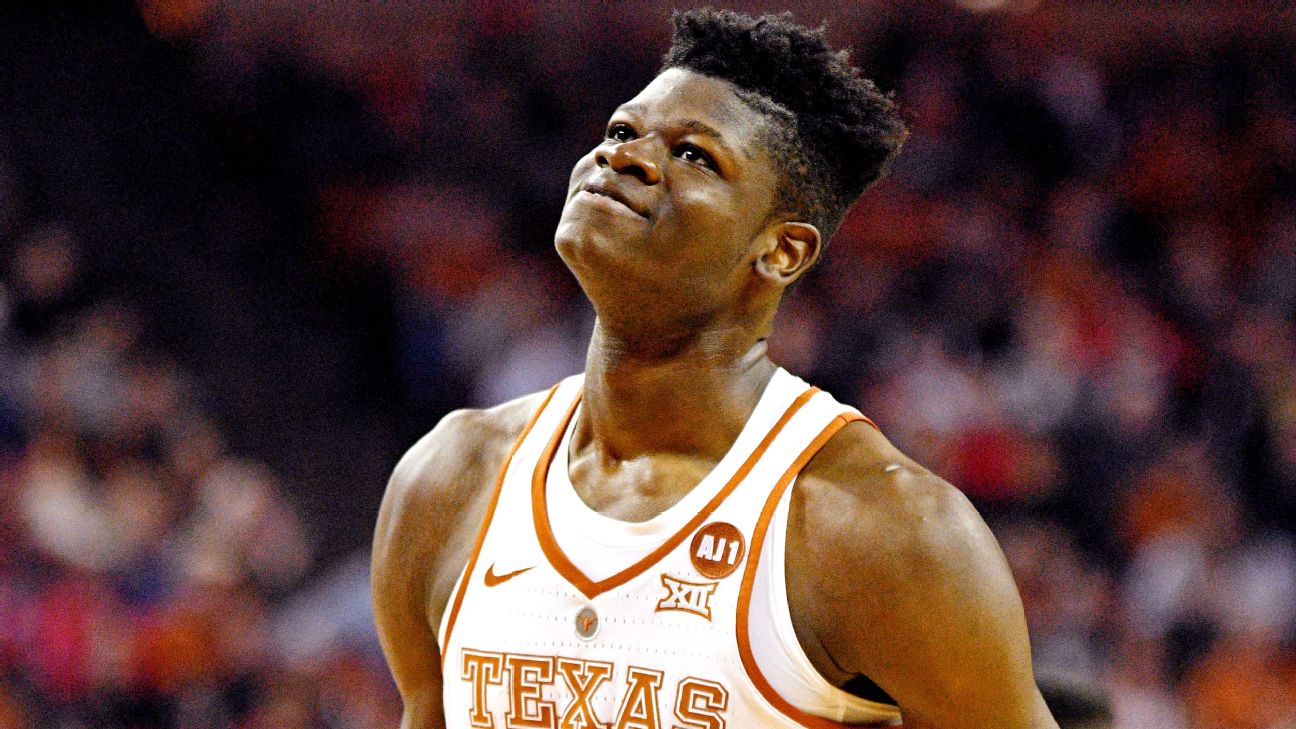 Top NBA draft prospect and formerTexas freshman Mohamed Bambasaid the opportunity to go straight from high school to the NBA would have been too good of a chance to pass up -- had the means been in place -- and that it would have "taken my game to the next level."

Bamba, who last month declared for June's draft and is a projected lottery pick, said Wednesday in an interview on ESPN's The Jump that his one year in college has no doubt been invaluable.

"But at the same time, I could have had a year of NBA development and had a year head start," Bamba said. "So, obviously, I would love to have that opportunity if it was there for me."

An independent commission earlier Wednesday recommended the NCAA begin working toward pushing for reforms that would end the NBA's so-called one-and-done rule.The commission said it wanted 18-year-olds to again be eligible for the NBA draft, allowing a path to the pros directly out of high school.The earliest possible date for change based on conversations the NBA has had with its players' union is the 2020 draft, league sources told ESPN's Adrian Wojnarowski.

Bamba, a 7-foot center with a 7-foot-9 wingspan, was one of the top freshmen in college basketball this season. He averaged 12.9 points and 10.5 rebounds while ranking second nationally in blocks at 3.7 per game. Bamba totaled 15 double-doubles, including eight during an 11-game stretch in January and February.

"I don't want to take away from anything from my time at Texas," he told ESPN host Rachel Nichols and analysts Byron Scott and Tracy McGrady. "I think it was actually pretty darn special. The relationships that I've built there, and the people that I've come across, I met some of my best friends in life at the University of Texas."

Bamba has been considered a top-five pick since the preseason, and he slots in at No. 5 in Jonathan Givony's latest ESPN mock draft.He missed three games late in the season with a toe injury, but he returned to put up 13 points, 14 rebounds and three blocks during a first-round NCAA tournament loss toNevada.

"It would have taken my game to the next level," Bamba said of a jump to the NBA out of high school. "Because now, what's so night and day between being a college student-athlete, is that you got to split up times for different things -- all right, now I have to actually study and write this essay; I have to crank it out because it's due tomorrow at 10 a.m.

"But now, I'm literally, the only thing I'm studying is myself. I'm really, like, fully invested in my body, and I'm really liking this professional thing."

When asked what it would mean to be drafted by his hometownNew York Knicks, the Harlem native indicated he hasn't tempered his expectations.

"That's funny," Bamba replied. "I didn't know the Knicks were in contention to be the No. 1 pick."

The Knicks indeed hold only a 1.7 percent chance of landing the top pick in next month's draft lottery, with thePhoenix Suns (25 percent), Memphis Grizzlies (19.9), Dallas Mavericks (13.8) and Atlanta Hawks(13.7) having the top odds.

"It honestly would mean the world to me -- I grew up watching the Knicks," Bamba said. "I watched the Knicks when they were at their worst, and I would always root for them because it's always been in my heart. It would be awesome, you know. I live three train stops from there."

Bamba recently spent a week working out withJoel Embiid while the Philadelphia 76erscenter worked back into shape after fracturing his eye socket and sustaining a concussion.

"He's the guy I really want to play against," Bamba said. "I learned so much from him in just a couple of days of being around him. He's a guy I'm really inspired to be like, and he's the guy I want to go at."

Bamba said his game fits into what the NBA is looking for -- "guys who can really stretch the floor out at the 5, but be elite rim protectors who can guard the 1 through 5 positions," and that in the five weeks since he has been preparing for the draft, he has been working on developing the mechanics of his outside jump shot.

"Making sure that my jump shot resembled more of a jump shot -- you know, everything was smooth -- rather than a catapult," Bamba said. "I recently lowered my pocket, and my follow-through looks good and everything is smooth. I still got ways to go with my jump shot. But I'm pretty happy with the progression that I've made."

Information from ESPN's Jeff Borzello and ESPN Stats & Information was used in this report.