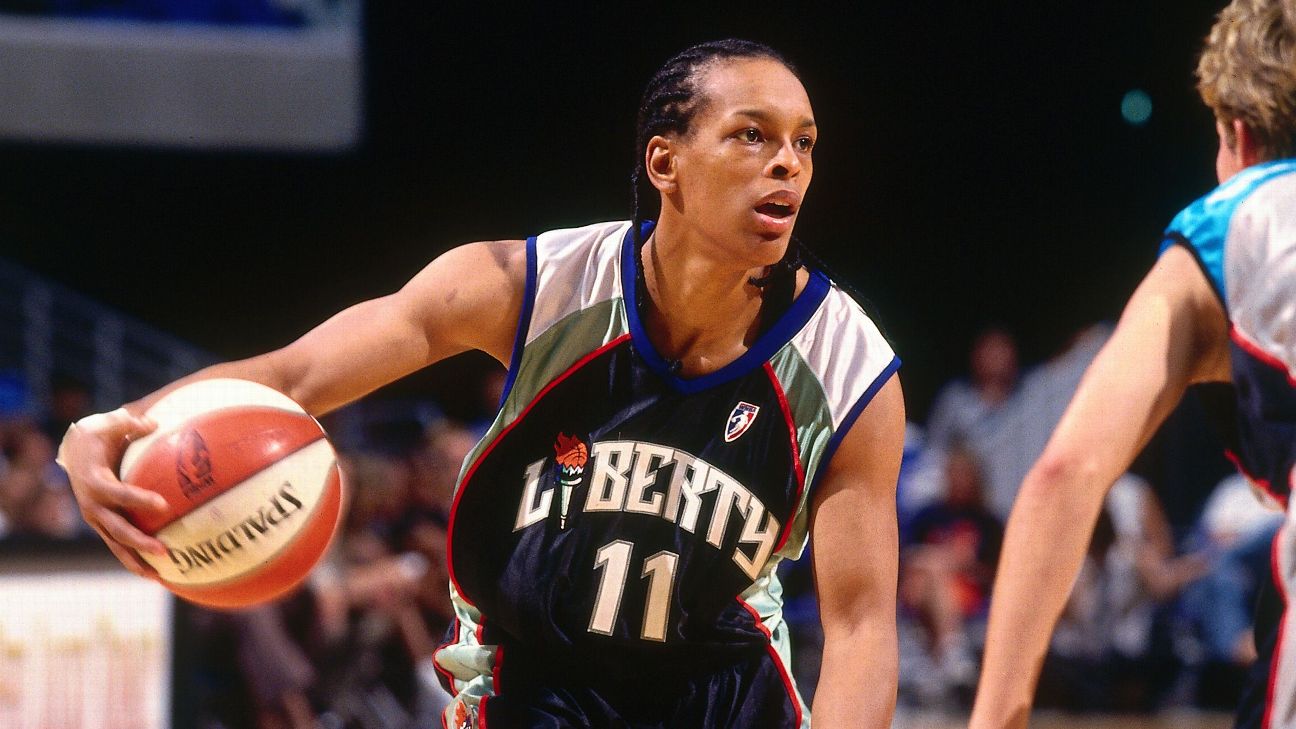 The New York Liberty were stranded at an airport, unsure if they'd even arrive back home in time to play that night's WNBA game. So to prepare, they taped the outline of a court on the floor of the terminal and did a pregame walk-through.

Teresa Weatherspoon insisted on it, so it had to happen. It was July 2000, and that's the way it was with those New York Liberty teams back then. What "Spoon" said went, and everybody was OK with that.

The Liberty were a vital part of the launch of the WNBA, and Weatherspoon -- a self-described small-town kid from Pineland, Texas -- took to the Big Apple as if she had been riding the subway and grabbing a pizza slice at 1 a.m. all her life.

When she is inducted into the Naismith Memorial Basketball Hall of Fame this weekend in Springfield, Massachusetts, two fan bases will swell with pride: from Louisiana Tech, where Weatherspoon won a national championship in 1988; and from the Liberty, with whom she didn't get a title but couldn't be more beloved.

Weatherspoon, who was inducted into the Women's Basketball Hall of Fame in 2010, didn't get these honors because she piled up gaudy statistics. She is acclaimed for how much she helped others do that. The 5-foot-8 point guard and defensive specialist was a nonstop energy source for her teams and also the consummate leader.

As former Liberty teammate Crystal Robinson put it: "She pushed you to knock down the wall that kept you from being great."

Weatherspoon, 53, is now director of player and franchise development for the Liberty. She played at Louisiana Tech from 1984 to 1988, averaging 8.3 points and 7.3 assists, while developing a relentless, defensive reputation that led opposing coaches to nickname her Rambo.

"That's Teresa Weatherspoon," said Baylor coach Kim Mulkey, who was an assistant at her alma mater, Louisiana Tech, from 1985 to 2000. "She had that body that was so physical and tough. She was always a spark, and you could feed off of her."

The last half of college basketball that Weatherspoon played was the most important of her amateur career. In the first half of the 1988 NCAA tournament final, Auburn star Ruthie Bolton had 16 points and the Tigers led 31-19. Weatherspoon went to the locker room knowing she hadn't been aggressive enough defensively, which Louisiana Tech coach Leon Barmore made abundantly clear in his halftime speech.

"I took that personally," Weatherspoon recalled. "I looked at the team and said, 'She will not score in this half.' And I had to go harder than ever before."

Weatherspoon did, indeed, hold Bolton scoreless in the second half. Louisiana Tech won 56-54.

A demanding but dedicated teammate

Later that year, Weatherspoon helped the United States win gold at the Summer Olympics in Seoul, South Korea. But the WNBA wouldn't come along for nearly a decade, so Weatherspoon headed overseas, where she played in Italy, France and Russia. She also was on the 1992 Olympic team that took a bronze medal.

Weatherspoon was one of 16 players allocated to the eight inaugural WNBA teams in 1997, going to the Liberty along with Rebecca Lobo. For that first season, the WNBA championship was decided by a title game, not a series, and the Liberty lost to Houston, the team that would be their nemesis.

In the WNBA Finals in 1999 and 2000, the Liberty also fell to Houston, then they lost in the finals to Los Angeles in 2002. New York hasn't been back to the WNBA Finals since, and the team no longer plays at Madison Square Garden, a place that could be magical at the height of Liberty-mania.

"It was almost a rock star kind of feel, being in New York," Weatherspoon said. "We had the opportunity to live in the city then, too, so we got the feel of the city, the grind of it. That made a tremendous difference, because we wanted our team to be like the city. We wanted New Yorkers to feel we were grinding just as hard as they were, and they were a part of what we did."

Robinson, who played in the short-lived ABL for two years before being selected by the Liberty in the 1999 draft, said she and undrafted rookie Becky Hammon bonded over their shared bruises after tough Liberty practices during which Weatherspoon demanded excellence.

"Everyone that Spoon played with has a great affinity for her," said Robinson, now an assistant with the Dallas Wings. "But Spoon wasn't always nice. She was very demanding. You didn't get things done, she was going to tell you.

"Spoon actually implemented a rule defensively that if you got beat off the dribble twice, you had to ask for a sub. Go to the bench and get yourself together, then come back in and help us. Spoon set a standard, and she lived that standard. So you couldn't help but follow it; there wasn't any wavering."

Which brings us back to the airport story. The Liberty were in the midst of winning 12 of 13 games on the way to making the 2000 WNBA Finals. The Liberty had played Friday night at Charlotte and then had a game slated Saturday night versus Cleveland back in New York.

A 24-hour turnaround gave them almost no time for preparation, but it was made worse when travel issues split up the team on different flights. Vickie Johnson, who joined the Liberty in 1997, recalled the starters wound up delayed on a connection in Atlanta, and there was concern they wouldn't make it home in time to play. Weatherspoon took the time they were inside the terminal to do a walk-through of the game plan.

"Yeah, people were watching us," Weatherspoon said, laughing. "But we were just making sure we were prepared. Because almost as soon as we'd be off the plane, we'd have to play."

That's what happened: The game time was pushed back, the Liberty got a police escort to the Garden and they won 81-67.

"I have so many memories of Spoon, but that's one of my favorites," said Johnson, now an assistant with the Las Vegas Aces. "That was her thinking of the team first, as usual."

So much more than 'The Shot'

One of Robinson's favorite memories was an example of what kind of leader Weatherspoon was off the court. When a player from overseas made the roster but had packed little more than a duffle bag of clothes, Weatherspoon took up a collection from the other players to buy her whatever she needed until she got her first paycheck.

"Spoon had high expectations of you," Robinson said, "but she was there for you to the end."

It's amuses Weatherspoon, however, that the WNBA memory most commonly associated with her is "The Shot" -- a heave from just beyond half court that gave the Liberty a 68-67 victory in Game 2 of the 1999 WNBA Finals. The fans in Houston were on their feet about to celebrate the championship when Weatherspoon snatched away the victory in one of the great highlights in league history.

Weatherspoon was not known for her shooting, especially from distance. She was the creator and facilitator, not the shooter. She averaged more assists (5.3) than points (5.0) in her eight-year WNBA career, seven of those seasons with New York. She finished her career in 2004 with Los Angeles.

But there also was something fitting about her making The Shot in 1999. That was a painful year for Weatherspoon, as her 19-year-old nephew, Anthony, died in an auto accident around the time the season started. Johnson was her roommate then and recalled there were times she wasn't certain Weatherspoon would be able to continue to play, her grief was so consuming.

"He was my best friend, and we talked on the phone every day," Weatherspoon said. "For a while, I didn't want to play anymore. There were times I was playing, and people thought I was sweating. But those were tears streaming down my face.

For many years, Weatherspoon tried to avoid watching the video clip of The Shot, because it brought back memories of both her nephew's death and the fact that the Liberty then lost the championship to the Comets in Game 3.

Now, she sees that special moment in a happier context -- which is basically how she sees life. Weatherspoon has been through some amazing times in basketball, which included going back to Louisiana Tech as head coach from 2008 to 2014. But she has had her share of disappointments and heartbreaks too.

"Things that you go through, the pain you go through, my parents always taught us those things could create paths for you," Weatherspoon said. "But you have to learn to see it differently.

"My mother and father said, 'Every day that you get up and you're alive and well, you have another chance to try to do something better.' Coach Barmore always said that too: 'If you're always stuck today on what you did yesterday, you're in trouble.' I've always wanted my tomorrows to be better. That's the way I've approached every day." 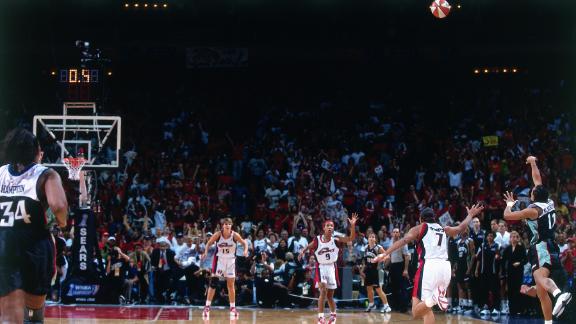