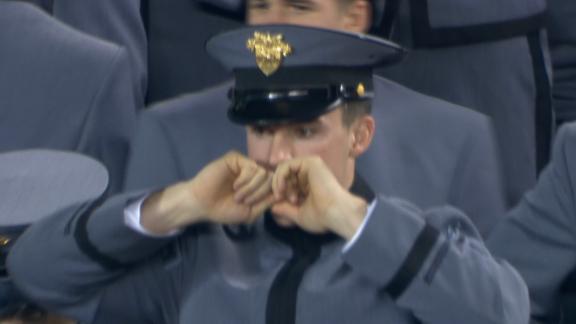 PHILADELPHIA -- With a shot at history at stake, Keenan Reynolds ended his Navy career with a clean sweep against Army.

Reynolds rushed for two touchdowns and threw for another score to lead the No. 21 Midshipmen to their 14th straight win over the Black Knights 21-17 on Saturday at Lincoln Financial Field.

"That was the No. 1 goal," Reynolds said. "To be able to be here four years and never lose against Army, that's huge."

The Midshipmen (10-2) can hook an anchor to the Commander-In-Chief's Trophy. It's coming back to Annapolis, Maryland, after a one-year hiatus.

"We get to go to the White House this year and get our trophy back," Reynolds said.

Reynolds' second rushing touchdown was his 85th career score, the most for any Division I player. He is the first quarterback over the 116-game series to go 4-0.

Niumatalolo improved to 8-0 against the Black Knights (2-10) two days before he is set to visit BYU to talk about the program's coaching vacancy.

Army coach Jeff Monken showed his program might be closing the gap on Navy but blew any chance of an upset in the fourth quarter.

Daniel Grochowski missed a 29-yard field goal early in the quarter. Chris Carter lost a fumble at the Navy 34-yard line that was recovered by linebacker Ted Colburn. Navy had two interceptions -- one off a trick play -- on two straight drives to preserve the lead. Army's Hail Mary on the final play of the game fell short.

"That's our job at West Point, to build those warriors," Monken said. "I'm absolutely positive we've got a room full of guys in there that are going to find a way to win."

Niumatalolo, the winningest coach in Navy history, seemed focused with "Damn The Torpedoes" stenciled on the back of his hat. But he had much more on his mind than just dominating Army again. He could leave after eight seasons to follow his heart and religion to BYU.

"We're an institution, and we're certainly a football program, that's steeped in team and not about 'me.' All of a sudden, it's become about that," Navy athletic director Chet Gladchuk said before the game.

Niumatalolo danced -- he at least tried to dab -- in the locker room as players circled him and hollered in celebration.

He choked back tears discussing his faith-based decision to visit BYU. Niumatalolo is a Mormon who went on a two-year mission after his freshman year at Hawaii.

"It's been my life," at Navy, he said. "My kids have grown up here. I've given everything for his program."

Reynolds put the spotlight back on the game and showed why he was a late contender for Heisman Trophy consideration. Reynolds, the only player in team history with two 1,000-yard rushing and passing seasons, put the Mids up 21-17 with a 50-yard touchdown pass to Jamir Tillman late in the third quarter.

A three-touchdown favorite, Navy had it tougher than usual in one of the most storied rivalries in college sports. The Mids won the CIC trophy, awarded to the team with the best record in games among the three service academies. Navy beat Air Force 33-11 this season.

Army and Navy turned a game already stuffed with pomp and patriotism into a bit of a fashion show.

Navy wore seven different hand-painted helmets that paid homage to seven of the ships that make up the U.S. Naval Fleet.

Army topped its rival with 17 helmets, representing the 17 branches cadets can enter after graduation.

Billed as "America's Game," the Linc was stuffed with cadets and midshipmen standing, bouncing and cheering the entire game. U.S. Defense Secretary Ash Carter attended and watched a half with each side.

Army came ready to pull an upset and snap the second-longest losing streak to one team of any uninterrupted FBS series.

The Black Knights got a field goal on the game's opening drive, and Tyler Campbell scored on a 29-yard run to make it 10-7 in the first.

Reynolds scored on runs of 58 yards and 1 yard to keep Navy in the game and then used his arm to find Tillman in the third to take the lead for good.

He has a 31-13 career record as a starter and is Navy's career leading rusher. Hoist that broom to the mast: Reynolds is the first quarterback to go 4-for-4 in a classic rivalry that began in 1890.