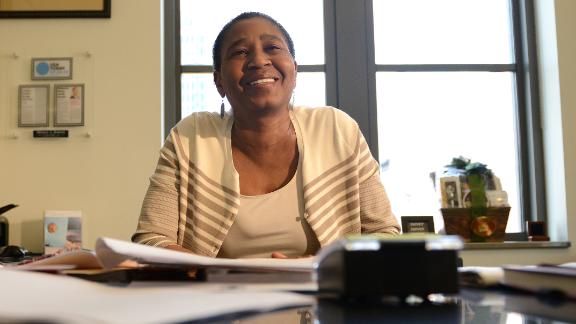 NEW YORK -- Michele Roberts, the NBA players' union executive director, on Wednesday questioned several of the principles that for decades have governed owner-player relations in the league, objecting to the concept of a salary cap while making clear she'd push for much more than a 50-50 split of basketball-related income.

"Why don't we have the owners play half the games?" Roberts said, speaking in her Harlem office to ESPN The Magazine. "There would be no money if not for the players."

"Let's call it what it is. There. Would. Be. No. Money," she added, pausing for emphasis. "Thirty more owners can come in, and nothing will change. These guys [the players] go? The game will change. So let's stop pretending."

Roberts, hailed as one of the most brilliant trial lawyers in the United States, made history in July by being elected the first female union chief in major North American sports.

But given the context of a nine-year, $24 billion TV deal set to begin in 2016, and the players' ability to opt out of the league's collective bargaining agreement after the 2016-17 season, Roberts' relatively radical perspective could prove to be just as profound a change.

"I don't know of any space other than the world of sports where there's this notion that we will artificially deflate what someone's able to make, just because," she said, talking about a salary cap -- a collectively bargained policy that, in its current form, has constrained team spending in the NBA since 1984-85. "It's incredibly un-American. My DNA is offended by it."

"We couldn't disagree more with these statements," Silver said. "The NBA's success is based on the collective efforts and investments of all of the team owners, the thousands of employees at our teams and arenas, and our extraordinarily talented players. No single group could accomplish this on its own. Nor is there anything unusual or "un-American" in a unionized industry to have a collective system for paying employees -- in fact, that's the norm.

"The salary cap system, which splits revenues between team owners and players and has been agreed upon by the NBA and the players association since 1982, has served as a foundation for the growth of the league and has enabled NBA players to become the highest paid professional athletes in the world. We will address all of these topics and others with the players association at the appropriate time."

The rookie wage scale, Roberts argued, is also problematic, as are max contracts, another entrenched restriction of the NBA's free market that Roberts wants dissolved.

"I can't understand why the [players' association] would be interested in suppressing salaries at the top if we know that as salaries at the top have grown, so have salaries at the bottom," she said. "If that's the case, I contend that there is no reason in the world why the union should embrace salary caps or any effort to place a barrier on the amount of money that marquee players can make."

While Silver has proposed increasing the NBA draft age limit to 20, Roberts rejected the philosophy underpinning an age minimum.

Nor does Roberts expect the players to swiftly consent to the current plan for "cap smoothing," as relayed by the NBA's attorneys, wherein the league would avoid a TV-driven spike in the salary cap in 2016 by artificially and incrementally increasing the cap over multiple seasons leading into that season.

"You can call it a 'spike,' but it's also just an accurate reflection of what the revenue is," she said. "At first glance, [cap smoothing] is not that attractive, I won't lie. But we're studying it to figure out if there really is some advantage for players."

Roberts also would like to keep investigating the prospect of shortening the 82-game season, a desire already expressed by superstars such as LeBron James and Dirk Nowitzki.

"Every time a player gets hurt, I think, my God, they really are pushing their bodies," she said. "And back-to-backs, those are the ones I really find disturbing. ... So the answer, of course, is that everybody wants a shorter season. The tension is, Will that mean less money? And that's something we need to talk about and think about. ... I don't think it would hurt the game to shorten the season."

When asked about Roberts' and Silver's most recent comments, James refrained from taking a side.

"Let me not sit here because I'm not caught up to speed of her comments and I'm not caught up to speed on the commissioner's comments. So I can't comment on those two subjects. Obviously we'd love to get together before the deadline so we don't have to go through the same thing we went through a few years ago when we had the lockout. But I can't comment on both comments because I don't know what happened in transcript," James said. "I don't want to say nothing that I'm not knowledgeable about. But at some point we'd like to start conversations because you don't want to get to a point where the deadline happens and now we're scrambling.

"Our game is too good, it's too popular. Everyone loves our game all across the world and we don't want to get to the point where we have to have another lockout."

Roberts doesn't think that teams are hurting for money, period -- even if she did recently hear Silver report that roughly one-third of NBA franchises are still unprofitable.

"I initially just started laughing, to be honest with you," she said of her reaction to that statistic. "I know that as a result of the last CBA, at least 1.3 billion dollars in revenue that would have otherwise been on the players' side is now on the owners' side. I see the valuations of these teams going though the roof. ... How much more do you need to make money?"

So how has the NBA managed to successfully institute legislation that, in Roberts' view, is both opposed to this country's capitalistic principles and her players' best interests?

"No one wants to say it out loud, but it's a monopoly," she said. "And were there alternatives, they wouldn't get away with it."

"I'll give the league credit," she added. "They have done a great job controlling the narrative."

Union Chief: NBA Owners Expendable
Stephen A. Smith and Skip Bayless discuss NBAPA director Michele Roberts' comments that NBA owners are expendable and players aren't, and she would push for no salary cap and a 50-50 split of revenue.

First Woman To Head NBPA, Up To The Challenge
Executive Director of the National Basketball Players Association Michele Roberts describes how her unique perspective makes her perfect for her new position.