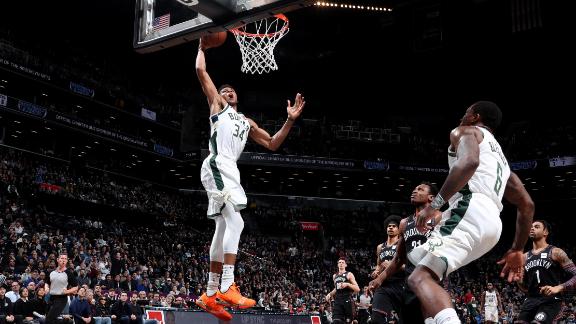 For the first time in over a month, the Brooklyn Nets are on a losing streak.

Now they get an opportunity to break it against the best team in the league.

After losses in San Antonio and Orlando, the Nets host the league-leading Milwaukee Bucks on Monday night.

Brooklyn (28-26) returns home to face Milwaukee and Western Conference co-leader Denver on Wednesday. Those are among 19 remaining games against teams at or currently above .500.

Brooklyn's last losing streak was Dec. 28-29 in a back-to-back set at Charlotte and Milwaukee in games that began less than 24 hours apart. This time the Nets face the Bucks coming off a 102-89 loss at Orlando on Saturday when they shot 36.3 percent and committed 19 turnovers.

The Nets last sustained three straight losses Nov 21.-Dec 5 when they dropped eight in a row, including five by single digits. Since blowing a 23-point lead and losing 114-112 to Oklahoma City on Paul George's buzzer-beating 3-pointer, Brooklyn is 20-8 in its last 28 games.

The hot streak includes an impressive run at home where Brooklyn has won nine straight and 13 of 14. The Nets used their home court to overcome sluggish moments in their last two home games -- a 122-117 win over Chicago on Tuesday and a 109-99 win over New York on Jan. 25.

This time the Nets will be hoping to use their advantage in Brooklyn to rebound from scoring the second-fewest points of their hot streak and recording the lowest shooting percentage of this run.

D'Angelo Russell was held out of the last meeting to rest but enters this meeting as an All-Star. He scored 23 points Saturday and is averaging 21.3 points on 46.6 shooting since the turnaround began.

"We can't get comfortable," Russell said. "We've got to stay sharp offensively and defensively. The mental preparation going into every game has to be us being thirsty. We've got to get that mentality like we lost eight in a row."

Milwaukee owns 11 wins in the last 12 meetings and five straight in Brooklyn. The Bucks also the top road record in the East at 16-9 after shooting 50 percent in Saturday's 131-115 win at Washington.

Milwaukee is 6-1 on the road during this 10-game surge and All-Star Giannis Antetokounmpo is averaging 26.6 points. He scored 37 Saturday and set a team record by making all 17 free throw attempts, breaking the mark of 15 held by Michael Redd, Glenn Robinson and Frank Brickowski,

It was Anteotkounmpo's 21st contest with at least 30 points and Milwaukee is 16-5 in those games.

"As a team, I feel like we think about the game less," Antetokounmpo said. "We just smile. We just have fun. And we know when the game starts at 7:30 or 7 o'clock, we're going to do whatever it takes to win. We don't try to overthink things."

The Bucks moved to 25 games over .500 for the first time since ending 1985-86 at 57-25. They picked up their latest win without Eric Bledsoe (sore left Achilles) but it seems likely Bledsoe will play Monday.

"The soreness, I think, is just at a stage where we feel like this is the best decision," Milwaukee coach Mike Budenholzer said. "It's been there for a little bit and hopefully, it's short term. We'll see. He's got today and tomorrow before we play again on Monday. I just think it's the right thing for Eric and for us."

Besides trying to get another win for Milwaukee, Monday will be Brook Lopez's second return to Brooklyn as a visitor and the center's fourth contest against his former team since he was traded to the Lakers for D'Angelo Russell on draft night 2017.

Lopez made seven 3-pointers and scored 24 points in Milwaukee's 129-115 win over Brooklyn in the first meeting. Against Brooklyn, Lopez is averaging 25.6 points on 54.7 percent shooting.