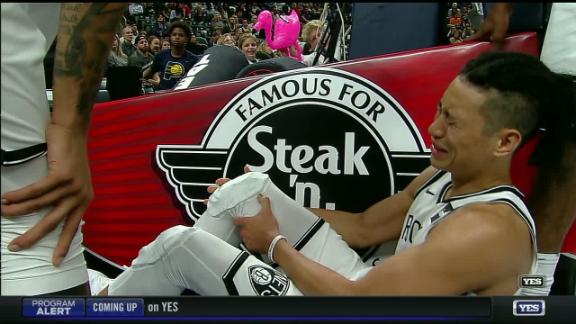 ESPN
By Adrian Wojnarowski
After crumbling to the court and leaving the Brooklyn Nets' season-opening loss with an injury, point guard Jeremy Lin will undergo a right knee evaluation in New York on Thursday, league sources told ESPN.

There's concern that Lin suffered a significant injury, league sources said. Nevertheless, the franchise will await test results upon its return home from an opening-night game in Indiana.

Lin landed awkwardly on a drive to the basket in the fourth quarter of the Nets' 140-131 loss to the Pacerson Wednesday night, and his immediate emotional reaction seemed to indicate he feared a serious injury.

If Lin is lost for a significant period of time, Russell would move into the starting point guard role and Allen Crabbelikely would become the Nets' starting shooting guard.

Both players were acquired in trades this summer. Russell and Lin were expected to play together in the Nets' backcourt this season, but Russell, 21, is considered the franchise's point guard of the future.

Lin comes down awkwardly, hurts knee
Jeremy Lin goes up for a layup and hurts his knee as he lands. Lin would go to the locker room and did not return.
Report a correction or typo
Related topics:
sportsespnnbajeremy linbrooklyn nets
Copyright © 2020 ESPN Internet Ventures. All rights reserved.
More Videos
From CNN Newsource affiliates
TOP STORIES