Nets pound Spurs 139-120 in Popovich's return to the bench 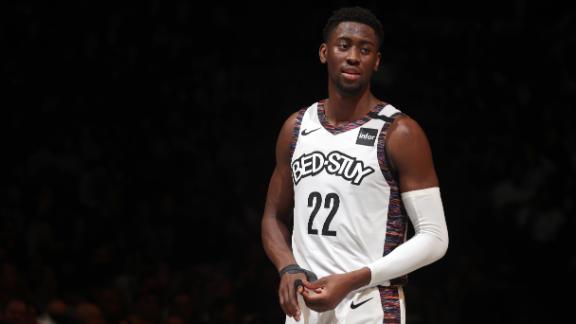 NEW YORK -- Caris LeVert and the Nets treated Dr. J to a show in his first game in Brooklyn.

Gregg Popovich sure didn't enjoy it after reclaiming his seat on the Spurs bench.

LeVert had 27 points, 11 rebounds and 10 assists and the Nets pounded San Antonio 139-120 on Friday night in Popovich's return from a one-game absence.

With Julius Erving attending one of their games for the first time since they moved to Brooklyn in 2012, the Nets rang up 75 points in the first half, put eight players in double figures and led by as much as 33 in front of one of the greatest players in franchise history.

LeVert said he hoped the Hall of Famer was impressed.

"He's a legend, one of the greatest to put on a Nets jersey, put on a jersey in general, so it was cool having him there," LeVert said.

LeVert, who had a career-high 51 points in a victory at Boston on Tuesday, recorded his first career triple-double.

"I think anybody that's been around Caris since he's been in the league would probably tell you that he's not surprised at all," Harris said.

DeMar DeRozan had 24 points and nine assists for the Spurs. Trey Lyles and Derrick White each added 19 points.

Routed by Memphis in their last game, the Nets changed their starting lineup, inserting Wilson Chandler for Taurean Prince, and the new look sure looked good.

It was already 20-6 by the time Popovich used his second timeout, not even halfway through the first quarter. That couldn't slow down the Nets, who led 41-22 after one following DeAndre Jordan's dunk on an offensive rebound.

LeVert scored 10 in the second quarter, when the Nets pushed the lead to 33 on a few occasions before settling for a 75-54 cushion at the break. Then, just to make sure there would be no comeback, the Nets scored a franchise-record 45 points in the third.

Popovich missed the game in Charlotte on Tuesday for personal business. Tim Duncan was the acting head coach as the Spurs rallied from 17 down to beat the Hornets by one.

"I think what he said was: 'Once is enough. I'm not doing this anymore." Popovich said.

The Spurs could've used the five-time champion on the floor. With starters LaMarcus Aldridge and Jakob Poeltl injured, they were overwhelmed by the Nets big men.

Nets fans at one point chanted "Suit up Timmy! Suit up Timmy!" and he couldn't have done any worse than the guys Popovich did use.

Spurs: Popovich said he thought Aldridge was on track to return from a right shoulder injury Friday, but the forward got his finger caught in the net and aggravated the injury.

Nets: Prince finished with 13 points in his new role as a sub. ... The Nets won for just the second time in seven games.

Popovich said he would only want Kevin Durant on his U.S. Olympic team roster if the Nets forward is completely ready for game action. If Durant is trying to rush his rehab from Achilles tendon surgery just to play in Tokyo, Popovich thinks it'd be better if he stayed home.

"My feeling on that is that I would want Kevin to be absolutely ready to go, working out, playing 5 on 5, that his organization and he both feel like it's time to play," Popovich said. "I wouldn't want to be any part of him being 60 percent or 70 percent and just starting to get in shape because of the Olympics. The Olympics are important, it's huge, but he's got a career to take care of here with the Nets. I would rather have him do that if he's not totally ready to play this summer."

DOCTOR IN THE HOUSE

Erving helped the New York Nets win two ABA titles. Nets coach Kenny Atkinson grew up on Long Island and watched Erving star for the Nets when they were based there before he was sold to the Philadelphia 76ers.

"He really helped pique my interest in basketball," Atkinson said. "I remember tying to go out and palm the ball and do that underhand dunk and all that stuff."