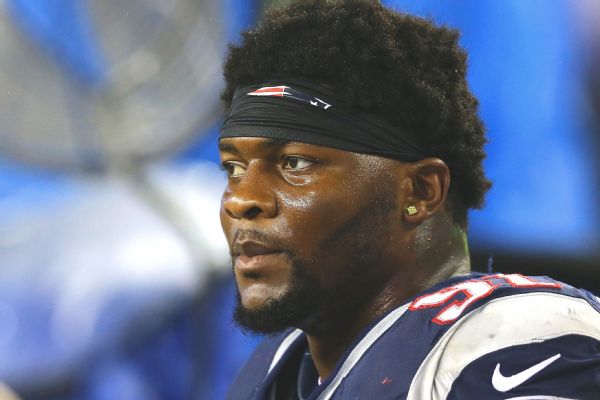 "I'm not Von Miller, just so you know," Collins said Wednesday. "Let's be smart now. Let's use some common sense."

Collins also said that he has not asked for a contract comparable to Miller's $114.5 million deal that includes $70 million in guaranteed money. Collins brought up Miller on his own when he was asked whether he had turned down a contract extension with New England before he was traded.

"I don't know [anything] about Von Miller money," Collins said. "Nothing. Never heard of that. Never came out of my mouth. Nothing."

The Browns acquired Collins on Monday for what will be either a third-round compensatory pick in the 2017 draft (if the Browns are awarded one) or a fourth-round pick in the 2018 draft. Collins said the trade surprised him and he doesn't understand it, but added the decision was out of his control. He said it took 10 minutes to shift gears and focus on being in Cleveland with the winless Browns.

"Business is business, man," Collins said. "I'm a grown man. I know how to handle situations."

"Situations occur all the time," he said. "I'm up for the challenge. I've been here before, so it's really no big deal to me."

Collins can be a free agent after the season, but the Browns hope to sign him to an extension before he hits free agency.

Collins said he never thought much about the fact that he was going from a Super Bowl contender to an 0-8 team.

"The only thing going through my mind was just transferring up here," he said. "All my personal belongings. I'm not worried about the organization, coming from New England to here. I'm not. That's not me."

He also shrugged off having bad feelings about leaving the Patriots.

"I leave anywhere with good terms with anybody," he said. "Like I said, I'm not stressing over nobody, no one. Not me."