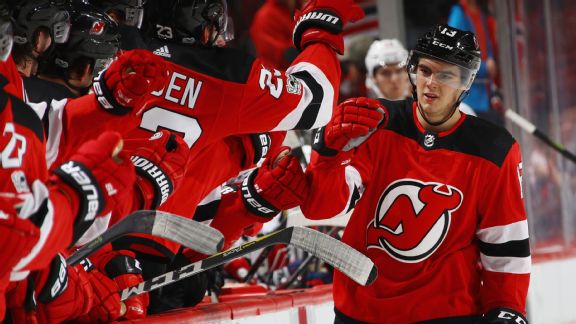 What teams in playoff position now are most likely to fall out?

Greg Wyshynski: I'm not going to pretend to understand what's going on in the Western Conference. Up is down, left is right, hamburgers are eating people and an expansion team is one point away from first overall in the conference. The Los Angeles Kings are 10 points ahead of the team Connor McDavid plays for. You figure it out.

So I'll instead focus on the Eastern Conference where, alas, I can't in good faith predict that the New Jersey Devils (6-2-0, second in the Metro) will finish in a playoff seed.

New Jersey's offense is punching above its weight something ridiculous, with a 10.34 shooting percentage at even strength (via Corsica) for a team that shot 6.36 last season. It's undeniable that the Devils have an upgraded forward corps compared with 2016-17, but they still seem primed to regress to the mean. And as surprisingly good as the scorers have been, that blue line still doesn't inspire much confidence.

But the biggest factor here is the rest of the conference. The Washington Capitals, Boston Bruins, Carolina Hurricanes and New York Rangers will eventually find their footing after early-season stumbles, not to mention that the Philadelphia Flyers and New York Islanders look to be contenders.

The Devils are markedly more fun than they've been in years. I'm just not super confident, in this conference, that it will translate into a playoff berth.

Emily Kaplan: The Vancouver Canucks have been a sneaky, early-season surprise. At 5-3-1, they are third in the Pacific Division. That is not a typo. After a 4-1 road trip, Vancouver is two games over .500 for the first time since January. Tons of credit is due to rookie coach Travis Green, who has created a clear identity for his team: a hard-working, grind-it-out bunch. I just don't think it's sustainable.

There's a reason this team was projected as one of the worst in the NHL this season. They don't have elite talent on their first line. The inevitable is coming to fruition: the Sedin twins are showing signs of age, combining for seven points through nine games -- 37-year-oldDaniel Sedin and Henrik Sedinare averaging 14:14 and 14:30 minutes per game, respectively, and are 17th and 18th among Canucks skaters at even strength. And while Michael Del Zotto has gone from an NHL afterthought to top-4 defenseman, his high-risk play yields just as many hazards as rewards.

Regression could set in soon because of a banged-up blue line.Alexander Edlerand Troy Stecher are both out four to six weeks with lower-body injuries. My final piece of buzzkillery for these Canucks: their last three wins have come against teams with a combined 9-14-5 record.

Good news, Canucks fans: Your situation isn't as dire as we thought. I just don't see a playoff team this early in the rebuild.

Chris Peters: The Colorado Avalanche have been proving doubters wrong early in the season. At this early stage, when teams are still bunched up, they're third in the Central Division. A 4-1 start to the season was noteworthy, but they've lost three of their last four.

A team's record never tells the full story, especially not this early in the season, but there are several factors that suggest the Avs will slide farther back to where they were projected to be heading into the season -- though perhaps not quite as bad as many projections, which had them right back in the basement after an abysmal 2016-17 season.

First off, Matt Duchene remains more valuable to this team in the long term as trade bait. He is tied for the team lead with eight points, which only helps his trade value. As other teams start to panic a bit more, they're going to start considering making a bigger move. There's probably no more intriguing a player on the block than Duchene, and Avalanche GM Joe Sakic has to use that to his advantage to maximize the return. But once Duchene leaves, it's hard to see Colorado finding a trade where there is little drop off, at least in the short term.

Colorado has also been bolstered by a strong start to the season for goalie Semyon Varlamov, who has a .929 save percentage through five starts. The 29-year-old has stood on his head for this team before, but he's not exactly the picture of consistency. Colorado has a more experienced backup in Jonathan Bernier, but I don't think he would vastly improve Colorado's chances should Varlamov falter.