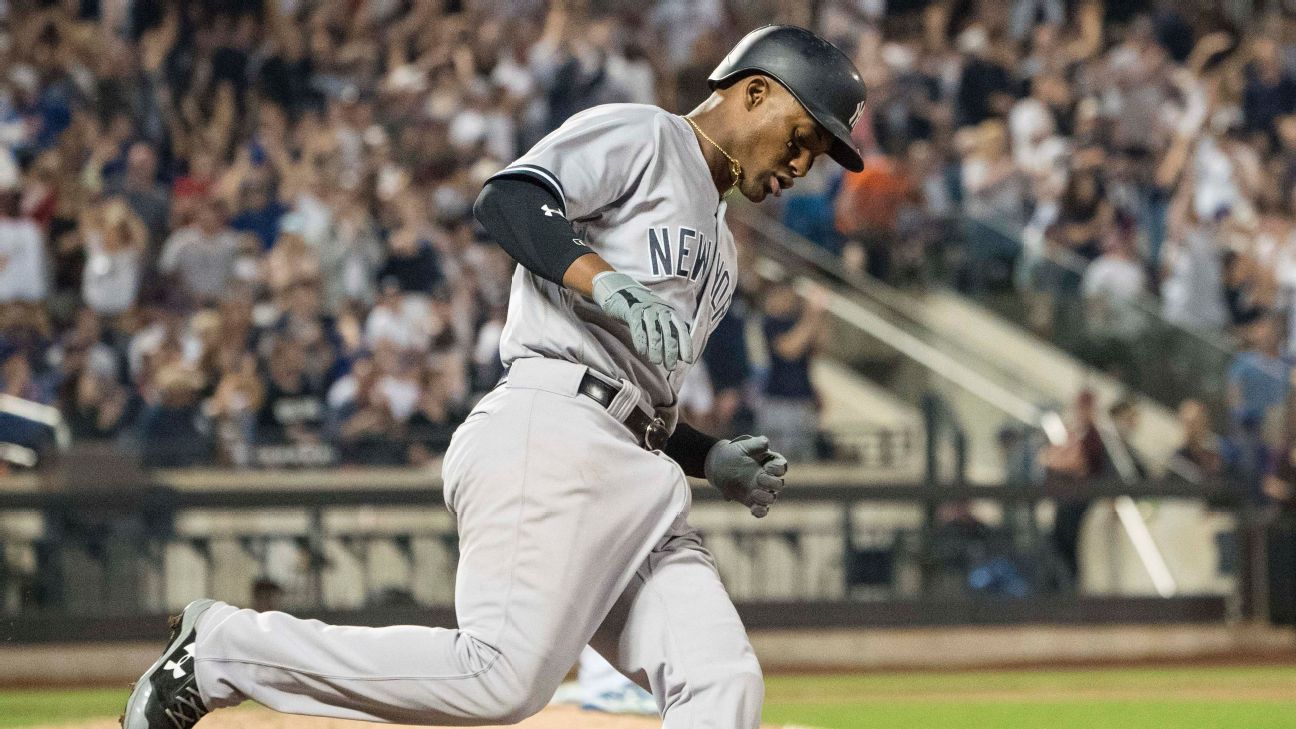 NEW YORK -- The brighter the lights, the bigger the stage, the better rookies Gleyber Torres and Miguel Andujar have been for the New York Yankees.

"That's really what's having our team, our success," super-slugging Bronx Bomber Aaron Judge said of his two young, productive teammates. "It's just been fun to watch. They're having fun out there, you can see it in how they're playing. Smiles are always on their faces."

The Yankees' 42-18 opening is their hottest start since 1998, when they went 46-14 en route to a 114-48 season and a World Series title. Between that and pulling ahead of the Red Sox atop the American League East, the Yankees have good reasons to smile these days. ESPN Stats & Information notes that the Yankees' 42-18 start matches the records of the 2017 Astros and 2016 Cubs, both eventual champions, through their first 60 games.The prospects of a season to remember keep increasing.

And as Judge said, Torres (21 years old) and Andujar (23) remain big parts of the reason why. Saturday night, they showed even more of that promise, when the duo combined on a pair of timely hits that helped the Yankees chip away at an early New York Mets lead, before eventually pulling away for a 4-3 win at Citi Field.

There was no walk-off home run from either of the rookies this time, nor was there a go-ahead base knock. Instead, there were a pair of midgame blasts that allowed the Yankees to stay in the game just long enough for Judge to uncork the big eighth-inning blow that capped the team's fourth straight win.

Long before Judge's go-ahead homer, Torres launched a 406-foot shot over the left-field wall in the third inning to cut into the Mets' lead and make it 3-1. Then in the sixth, Andujar's two-run 404-foot blast to left tied the score and gave the Yankees hope.

"They're really good at making the necessary adjustments, and in big situations just have a way of really slowing things down," Yankees manager Aaron Boone said. "It's not surprising really to see them lead the way back for us."

Yes, the Yankees have been saying these kinds of things about both players for a while. They have been throwing out their share of fancy superlatives for them at every opportunity they have. If you haven't heard them by now, get used to them.

More praise will come for Andujar and Torres specifically because of how consistently well they have played. After nearly two months in the majors for Torres and three for Andujar, it's clear that both have staying power. They figure to be key pieces for years to come in this youthful Yankees revolution.

"Those guys obviously have been talked about a lot, their ability," Boone said. "But it's a credit to both of those guys and who they are and their makeup, and also credit the organization for preparing them very well in the minor leagues so that when this opportunity has come now, they're ready for it. You feel great about both players in the toughest of situations."

In the most extensive action of his young career, German has pitched in 11 games, getting action both as a starter and a reliever. He entered the rotation a month ago, when fellow starter Jordan Montgomery went down because of an elbow injury, which ultimately resulted in season-ending surgery Thursday.

Just as Andujar and Torres have been asked to hit in their share of clutch moments this season, German, of late, has pitched through some challenging moments of his own.

In Saturday's start, he had to get out of some early trouble. After allowing three Mets runs to score in their half of the first off two home runs, German was told to reset himself mentally.

"Larry [Rothschild] basically told me to forget about that first inning," German said through an interpreter, referring to a conversation he had with the Yankees' pitching coach. "Things like that happen in baseball. Think of the second inning as the start of the game, and focus on doing your job."

German achieved better command of his fastball en route to striking out nine batters in his final five innings, retiring 11 of the last 12 men he faced. The right-hander had his most swing-and-miss success with the fastball, recording 19 total whiffs, nine of those coming off his four-seamer.

"He didn't buckle," Boone said. "In a big series and a big deal and he goes out there and really scuffles and doesn't blink."

Much the way Andujar and Torres have discovered how to make in-at-bat adjustments, German has figured out a way of, as Boone put it, "compartmentalizing things and handling the successes and the struggles that go with" being in a big league rotation. Consistency from a performance standpoint is all that's separating German from having the kind of young Yankees impact Andujar and Torres are having.

If New York can get that from him the way it has from Andujar and Torres, this already strong Yankees machine will become even stronger.