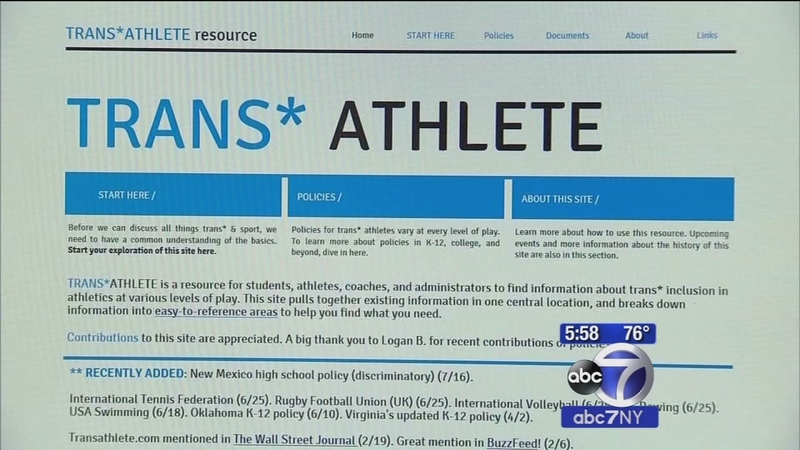 NEW YORK (WABC) -- High school can often be a difficult time for transgender students, but what happens when those students are also involved in sports?

There are no set rules in New York about high school athletes participating in a sport based on gender identity, but now, thanks to state education officials, there are new guidelines.

Publicly revealing her own struggles as a transgender female, Caitlyn Jenner, the Olympic athlete and gold medal decathlete formerly known as Bruce Jenner, reached out to other athletes who might be closely watching her acceptance of the ESPY Award for courage.

"I also want to acknowledge all the young transathletes who are out there," Jenner said. "Given the chance to play sports as who they really are."

But now, transgender athletes, especially those in high school, face either non acceptance of their new gender or confusion by athletic and school officials how to allow the student to play in the sport which aligns with their chosen gender.

"I just remember standing out there with her, and her holding me while I cried," transgender athlete Alex Trujillo said. "Like, I'm sorry."

"Through my own process of being a transgender athlete, trying to figure out the policy and procedures that would make it safe for me to play, I found there were not resources out there for student athletes," Mosier said.

After working on transgender guidelines for the past year, the New York State Public High School Athletic Association has established a draft that they unanimously approved on Wednesday.

"How do we give them the opportunity to participate in interscholastic sports?" NYSPHSAA executive director Robert Zayas said. "The transgender guidelines our association approved today would impact nearly 800 schools and approximately 600,000 athletes."

New York districts will have the guidelines by the start of school.

"We're not requiring schools to mandate anything," Zayas said. "But we are saying, here are a set of guidelines that you can abide by when you are presented with this situation."

Under the new guidelines, a student first notifies the superintendent he or she want to participate in a sport consistent with the gender with which they identify. The student's school determines eligibility, and the superintendent confirms the gender identity through a parent, guardian or doctor.

Once the school determines eligibility, it is granted for as long as the student particaptes in athletics.

"The way that transgender students are treated may differ from school to school, and it doesn't provide universal protections for students in our state," Mosier said. "So a policy would be better."

Mosier has also developed TransAthlete.com, a web resource that athletes and coaches can use for reference.

"All student athletes should be able to play the sport they love and as the gender they identify as," Mosier said.
Related topics:
sportstransgenderhigh schoolhigh school sports
Copyright © 2021 WABC-TV. All Rights Reserved.
More Videos
From CNN Newsource affiliates
TOP STORIES