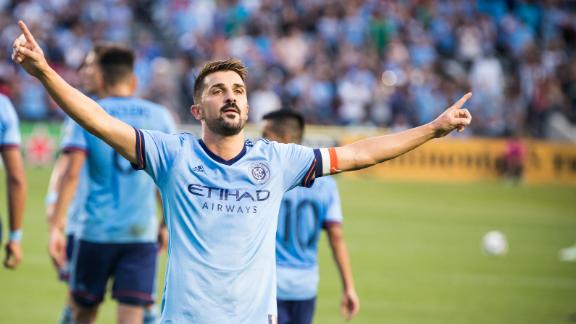 Villa, 35, returns to the squad after a three-year absence but Lopetegui said the former Valencia and Barcelona star's impressive form in Major League Soccer meant the call-up was "well deserved."

"We always said that we would not close the door to anyone," Lopetegui said at Friday's news conference. "We felt we needed him now and we think he will help us. He is having magnificent performances with his team and he is very motivated.

"It's true that he comes from a different league [MLS] but that is the way it is. I have spoken to David and we have seen him play.

"As always, Villa brings determination, ambition and experience. We are confident he can help us."

Diego Costa, meanwhile, misses out as he continues to seek a resolution to his situation at Chelsea.

Costa has been on a self-imposed exile in his hometown of Lagarto, Brazil, with the 28-year-old having recently accused the Premier League champions of pricing him out of his desired move back to Atletico Madrid.

Costa, top scorer with five goals in qualifying, last played for Chelsea in a 2-1 defeat to Arsenal in the FA Cup final on May 27.

"Costa has had a different summer, he is not training or playing," Lopetegui said. "We speak to everyone and look at everyone's personal situations. We give them our personal opinion and try to help out.

"It's clear that there is a situation that we have no say in and for us, it's a case of having to find solutions.

"From now on, more than worrying about this [Costa's situation], it's looking at solutions and we shall see as the season progresses what happens in the future."

AC Milan attacking midfielder Suso, who scored one goal and set up another in the Rossoneri's 3-0 win at Crotone in their Serie A opener at the weekend, has earned his first call-up to the national team.

"We know Suso well from the youth sides," Lopetegui said. "He is doing a great job and we have monitored him. He has had a great start to the season." Costa's Chelsea new teammate Alvaro Morata is in the 26-man squad and will return to the Santiago Bernabeu stadium to face Italy on Sept. 2, just six weeks after the striker left Real Madrid to join the London outfit.

Morata has scored one goal and set up another in two league appearances for Chelsea.

Manchester City midfielder David Silva, who has a team-high four assists and also scored four goals in qualifying, and Arsenal's Nacho Monreal are among the six Premier League players included in the squad.

"Italy is a fantastic rival," Lopetegui said. "I think they have grown as a team. We hope to beat them at the Bernabeu stadium."

La Roja then travel to Vaduz to face Lichtenstein on Sept. 5.