An MRI on Monday morning confirmed what the Jets suspected after their 54-13 loss to the New England Patriots -- a mild sprain to the posterior cruciate ligament.


The Jets have to make a decision on whether to place Wilson on injured reserve, which would sideline him for a minimum of three games.

Mike White, who made his NFL debut on Sunday, is expected to start Sunday against the Cincinnati Bengals at MetLife Stadium. Journeyman Josh Johnson is likely to be elevated from the practice squad to serve as the primary backup. The Jets may look to add an emergency quarterback for the practice squad.

Meanwhile, Jets rookie linebacker Jamien Sherwood, who has been a major contributor this season, tore his Achilles in the game against the Patriots and will miss the rest of the season, a source told Schefter.

Wilson's injury is a blow for the reeling Jets (1-5), who made the former BYU star the focal point of their rebuilding plan. The No. 2 overall pick started the first six games. Even though he's struggling -- ranked 31st out of 32 qualified quarterbacks in Total QBR -- he's gaining valuable experience.

The upside is that Wilson, without any setbacks in his rehab, should be back to play the final seven or eight games.


Wilson said his knee "twisted" and he "felt a pop" on a second-quarter hit by linebacker Matt Judon, who blasted the young quarterback as he heaved a long pass. He limped to the locker room and watched the remainder of his game on his smart phone, already rehabbing his knee.

The Jets left themselves vulnerable at quarterback by opting not to sign an experienced backup. They entered the season as only the fifth team in the last 10 seasons to have no quarterbacks with NFL experience on their Week 1 roster, according to Elias Sports.

White, a former Dallas Cowboys draft pick, threw a 3-yard touchdown on his first pass, but he finished with two interceptions. He completed 20 of 32 passes for 202 yards.

"Yeah, I'm confident in myself," White said after the game. "I'm mostly confident in the guys we have in that locker room, the leaders we have. The coaching staff, too." 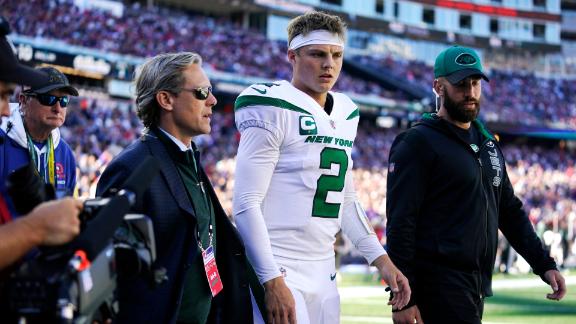