New York, New York: What we learned from a rare NBA doubleheader 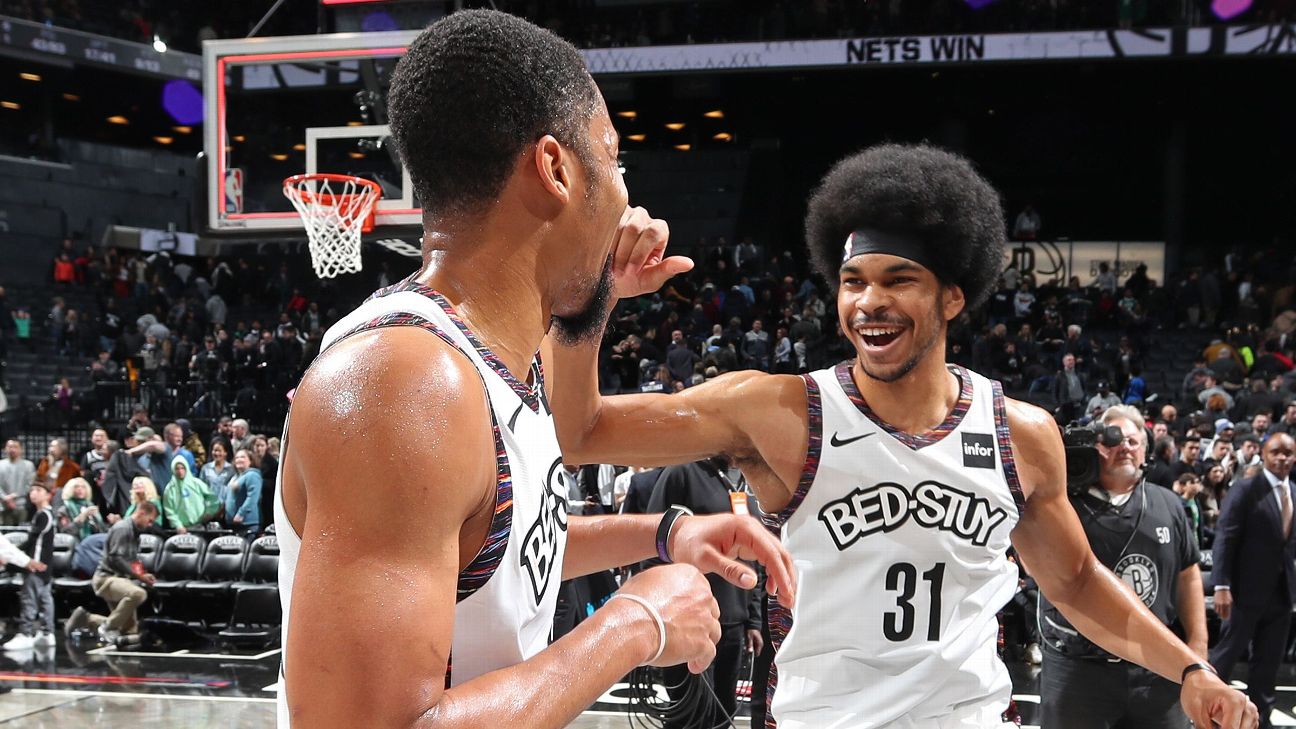 ESPN
By Tim Bontemps
NEW YORK -- Black Friday offered NBA fans in the Big Apple a rare treat: the chance to take in two games in one day.

Between the Boston Celtics and Brooklyn Nets playing at Barclays Center on Friday afternoon and the Philadelphia 76ers and New York Knicks squaring off at Madison Square Garden on Friday night, fans could -- if they chose -- take in four of the five Atlantic Division teams simply by taking a quick subway ride.

We did just that -- and, in the process, got a chance to take a snapshot look at all four of them as the NBA season is 20% complete. Here's what we saw:

In the middle of a timeout during the Celtics-Nets game, Kevin Durant and Kyrie Irving stood on the court laughing and joking with each other.

Unfortunately for the Nets, though, they did so wearing suit jackets and slacks.

But while Durant, Irving and Caris LeVert continue to sit out with injuries, Brooklyn earned a 112-107 victory over Boston thanks to standout showings from Spencer Dinwiddie and Jarrett Allen -- the kind that allow the Nets to hope they can continue their recent hot streak once they begin to get their big names back on the court.

The Nets are now 6-2 without Irving after Friday's win -- a stretch during which Dinwiddie has taken on the challenge of being the team's lead playmaker with aplomb.

"Just continuing to progress every year," said Dinwiddie, who had 32 points and 11 assists Friday and is averaging 24.5 points and 7.8 assists since Irving left the lineup. "I was just trying to strike a balance tonight between passing and scoring and figure out my role as it continues to shift around when we get healthy and aren't injured."

Dinwiddie has played alongside Irving plenty so far this season, too -- just as he did alongside D'Angelo Russell last season -- and that will continue once Irving comes back. Dinwiddie's size and length at 6-foot-6 make him a perfect complement to Irving.

Allen, though, will not be playing next to DeAndre Jordan, the man he's alternated time with this season -- which is why his play during this streak, in which he's averaged 15.6 points and 12.6 rebounds while shooting 72.5% from the floor, has the Nets so excited about what lies ahead.

"[Nets coach] Kenny [Atkinson] challenged him in film one game to not be as up and down, but to just be up, and to play at that level," forward Garrett Temple told ESPN. "'We see that you can and we need you to be at that level to be successful,' and he's taken that challenge head-on and he's been amazing.

"I think he understands what he can do, and he's stepped into that role. 'I can be this dominant inside and my team needs me to be dominant so I'm going to be dominant like that.'"

The Nets still have plenty to sort out. The offense will inevitably look different whenever Irving comes back -- which, after he returned to on-court work Friday, appears to be getting closer. LeVert's return will come a couple weeks after that. But, as they wait for those guys to return, the Nets have to feel good about what they are seeing in their absence.

On the first two possessions of the second half of Celtics-Nets, Boston center Daniel Theis missed a short runner in the lane, then watched Allen go right past him for an offensive rebound and a putback dunk.

Celtics coach Brad Stevens had had enough. Enes Kanter checked into the game for Theis 33 seconds into the third quarter, and Theis remained anchored to the bench for the remainder of the game.

"He was available," Stevens said when asked about Theis after the game.

"We've talked about it all year, we're going to have a rotating center spot. Now that Enes is getting healthier, I thought that Enes was really good in the first half, and so we went with Enes early."

Later, in reference to a question about Allen, Stevens made his true feelings known.

"I think we started three of the four halves we played in the last three days with a Jarrett Allen dunk," Stevens said, "which is not a good way to start from the Celtics' [point] of view."

Theis has been a significant part of why Boston has gotten off to such a strong start, but his benching Friday was just the latest example of the game of musical chairs Stevens has been playing with his supporting cast all season, in an effort to find usable rotation pieces.

So far, it has been a mostly barren pursuit.

Of the players behind the team's perimeter stalwarts -- Kemba Walker, Jaylen Brown, Jayson Tatum, Gordon Hayward and Marcus Smart -- the one option who has been serviceable is Brad Wanamaker, who has capably handled the team's backup point guard minutes. But Grant Williams and Carsen Edwards -- two of the team's three rookies drafted among the top 33 picks in June -- have struggled mightily. The third, Romeo Langford, made a 14-second cameo Oct. 30 and hasn't been seen in a game since. Semi Ojeleye, a third-year forward, remains an at-best inconsistent spot-up shooter on the perimeter.

The struggles by the rookies have stood out. After going 0-for-2 against the Nets, Williams is now just 12-for-49 (24.5%) from the field -- including 0-for-21 from 3-point range. There might not be a person better suited to dealing with such a slump, however, than Williams, who is equally both a sunny personality and a very confident one. But that can do only so much.

"Sometimes, you just miss them," he said, referring to his oh-fer streak from 3-point range. "But eventually they'll start falling, and I feel like they'll fall when the team needs them, especially. So I've got the utmost confidence in it to keep shooting them and let it fly."

"It's a tough adjustment," Edwards said Friday. "I'm still trying to learn. At the end of the day, I'm just learning and trying to do the best I can."

The same can be said for all of Boston's young players. And, at 13-5, the Celtics are exceeding expectations. But for a team that has aspirations of a deep playoff run, these final rotation spots are all worth watching.

During a timeout in the fourth quarter at Madison Square Garden, the in-arena camera showed singer Mary J. Blige sitting on celebrity row as her song "Family Affair" blared through the arena's speakers.

The Knicks' season, however, hasn't exactly been percolating.

The Knicks built up a 16-point first-half lead Friday, only to watch it immediately evaporate after halftime. The far more talented Sixers, who looked completely unmotivated in the first half, decided it was time to wake up and start playing, and went on to win 101-95.

Losing a big lead to the 76ers for the second time in two weeks isn't nearly as disconcerting as the haphazard way the Knicks are progressing through this season.

New York is tied with the Atlanta Hawks for the worst record in the Eastern Conference at 4-15. But it appears the team is still more focused on trying to win than trying to see what it has in its young players. That is the only explanation for Kevin Knox, the No. 9 pick in last year's NBA draft, getting a DNP-CD Friday night.

"But by no means is Kevin buried. He's going to have to fight his way out of it. I got a lot of confidence that he will."

There isn't a ton of evidence thus far in his career that Knox is going to be a good NBA player. He is shooting 38% from the field this season (though, to be fair, he's also shooting that from 3-point range, where it is a respectable mark). But whether there is evidence or not should be irrelevant for a Knicks team that wasn't expected to be competitive this season by anyone outside the organization.

The team's goal should have been to find out what it has in Knox, Mitchell Robinson, RJ Barrett and Frank Ntilikina. Nothing should get in the way of that -- especially after the dreadful start should have eliminated from the equation the faint notion that this team would be good.

But, in Fizdale's defense, this is the position the team put him in. After a loss to the Cavaliers earlier this month, team executives Steve Mills and Scott Perry -- at the behest of owner James Dolan -- held an impromptu news conference and declared, "We think the team is not performing to the level that we anticipated or we expected to perform at, and that's something that we think we collectively have to do a better job of delivering the product on the floor that we said we would do at the start of this season."

There is still plenty of time for the Knicks to shift their priorities to fully focus on the thing that should matter: the development of those young players. Until they do, however, an ugly season will only continue to get uglier.

There is one theme that has been consistently obvious about Philadelphia's start to its season, and it was on display again Friday, even in a halfhearted victory over an overmatched Knicks team. It's been something Sixers coach Brett Brown has said repeatedly, including before Friday's game: The offense has to catch up with the defense.

The numbers bear that out. The Sixers now have the NBA's third-best defensive efficiency, and they are within a half-point of having the top-ranked unit. Offensively, however, Philadelphia ranks just 18th in the league.

"We just really have to find our flow," forward Tobias Harris said. "We have to move our bodies a little more and just execute.

"Some games we do one of the three, or two of the three. But when it's good, and we're clicking, it looks real good. We're not going to be perfect, but we have some strides to make at that end."

It was always going to be a work in progress for the Sixers at that end of the court. Unlike almost every other team in the league, the Sixers are relying on size and strength to produce points, rather than spacing and shooting. It's a mix that is going to need time to be sorted out.

But there are signs that it will work. That starting five, in the limited minutes it has played together, has impressed, outscoring opponents by 21.3 points per 100 possessions. But the fact that the group has appeared in only nine of Philadelphia's 19 games -- and for a total of 102 minutes -- is a familiar development. The Sixers had similar issues getting their best players on the floor together last season.

"I feel like we got into a good flow," said guard Ben Simmons, who had 15 points and eight assists Friday. "There's ups and downs, which happens, but we're kind of finding it."

There have been flashes of what the Sixers can be -- like their opening-night win against the Celtics and last Saturday's demolition of the Miami Heat, both coming in Philadelphia. The 13-6 record isn't bad, either. But there's still much work to be done if the Sixers are going to be the team they hope to become. 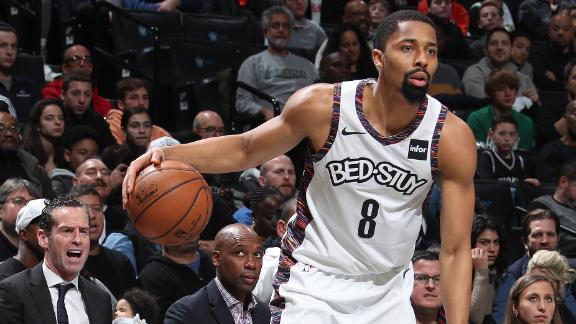 Dinwiddie drops 32 in Nets' victory over Celtics
Spencer Dinwiddie shoots six 3-pointers as part of his 32-point game in the Nets' 112-107 victory over the Celtics. 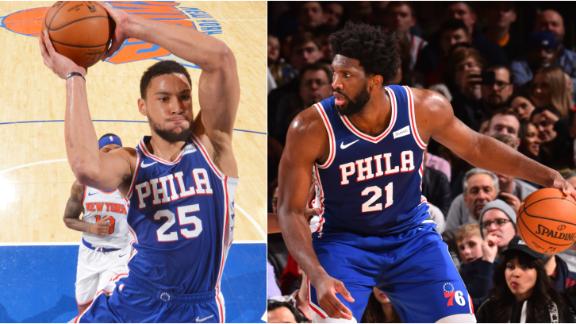