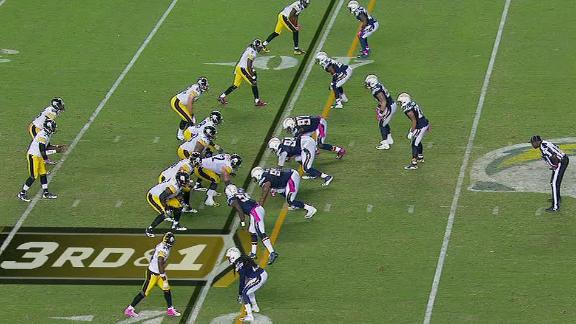 The NFL has blamed an error by a clock operator, and the failure to correct it by on-field officials, for an unusual run-off of 18 seconds near the end of the Pittsburgh Steelers' 24-20 victory Monday night over the San Diego Chargers.

The performance of those responsible will be reviewed as per standard procedure, according to league spokesman Michael Signora.

The incident occurred after a touchback as the Steelers gained possession for their game-winning drive late in the fourth quarter. By NFL rule, the clock should not have started because the receiving team possessed the ball in the end zone without taking it onto the field of play.

The clock continued to run, however, and when the Steelers huddled, the clock showed 2:38 remaining instead of 2:56, as it should have. The Steelers scored on their final play from scrimmage, so the outcome of the game was not directly affected, but a second consecutive officiating gaffe on Monday Night Football was concerning.

Official game time is kept on the stadium scoreboard, which is operated by a league-hired local resident who usually has college football officiating experience.

But in a statement, the league confirmed that side judge Rob Vernatchi was responsible for supervising game timing. Vernatchi or any other member of referee Pete Morelli's crew could have corrected the error if they had noticed it.

The NFL also emphasized in its statement that most instances of clock error are not reviewable by replay.

The timing error occurred exactly one week after the NFL admitted it missed an illegal bat penalty that would have given the Detroit Lions possession of the ball at the Seattle Seahawks' 1-yard line late in the fourth quarter. The call was not made, and the Seahawks were able to run out the clock in a 13-10 victory.

Game clock error could have prevented winning drive
With 2:56 left in the fourth quarter, San Diego kicks off and the ball goes past the end zone, with Pittsburgh getting the ball back at 2:38. The Steelers should have gotten the ball back with 2:56 still on the clock.