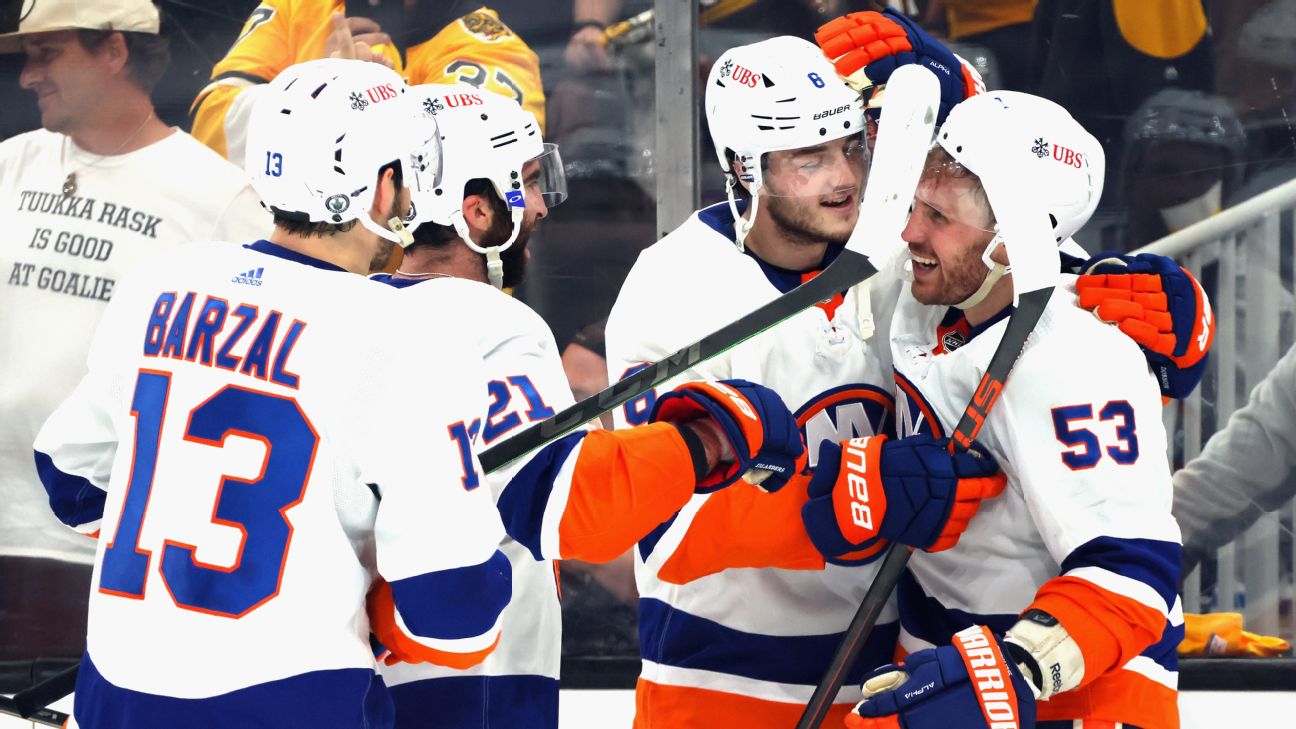 The New York Islanders return to what should be a high-decibel atmosphere at Nassau Coliseum for Game 3 of the East Division final against the Boston Bruins, while the Carolina Hurricanes try to avoid an 0-3 deficit as their series heads to Florida against the Tampa Bay Lightning.

Plus, we take a look at Wednesday night's action, which included an overtime thriller between the Colorado Avalanche and Vegas Golden Knights, as well as the series opener between the Montreal Canadiens and Winnipeg Jets, which ended in controversy.

The Islanders got what they wanted: By winning Game 2, they took home-ice advantage away from the Bruins. Now they return to Nassau Coliseum -- with a capacity boosted to 12,000 fans -- looking to break the series stalemate. "I think they know: Bring it, we're going to need them," coach Barry Trotz said of Islanders fans. "We're going to need every one of them just to get through this, because we're playing a very good hockey team. We want to do it for the area, for our fan base, for ourselves as an organization."

The series is on the line for Carolina as the games shift to Tampa. "Nobody knows the outcome. Nobody knows how the bounces are going to go. But I know how our guys are going to come to play. They're going to give everything they can," said coach Rod Brind'Amour. The good news: The first two losses were tightly played 2-1 games. The bad news: Forward Vincent Trocheck, who injured his leg in Game 2, could join Nino Niederreiter on the shelf for the Hurricanes. Brind'Amour said Trocheck's injury didn't look good after Game 2 and that he was getting more tests ahead of Game 3.

The Canadiens rode the momentum from their Game 7 elimination of Toronto to a big Game 1 win over the Jets. Jesperi Kotkaniemi and Eric Staal scored goals in the first 5:10 and then Nick Suzuki extended it to 3-1 by the end of the first period. Brendan Gallagher answered a Winnipeg goal in the third period to maintain a two-goal lead, and that breathing room was enough to hold on for the 5-3 win. The offense left the Jets stunned, and Carey Price (27 saves) kept them frustrated. Full recap.

This was one of the best games of the postseason. The Avalanche got a power-play goal from Mikko Rantanen at 2:07 of overtime to take Game 2 and take a 2-0 series lead. The teams traded goals for two periods, while the Golden Knights sent 41 shots on goal against Colorado -- hitting multiple posts. Rantanen had high praise for Philipp Grubauer in goal. "He kept us in the game. He was basically the reason why we got to OT," he said. Full recap.

"Anxiety level: zero." That was Grubauer's response to a question about facing 41 Vegas shots in the Avs' 3-2 overtime win. The Colorado goalie was brilliant in the third period, stopping all 15 shots he faced, including a few in a late period power play.

Price gave up three goals in the game, but was there when the Canadiens needed him in their Game 1 win. He's now 13-0 in his career when the Habs score three goals in a playoff game.

Rantanen's goal at 2:07 of overtime handed Game 2 to the Avalanche, but he also gets the star here for dropping his stick on a Reilly Smith slash to draw the penalty that gave Colorado the power play.

Penalty of the day

Vegas forward Reilly Smith was whistled for a slashing penalty 44 seconds into overtime, as Mikko Rantanen's stick fell to the ice to punctuate the call. Rantanen scored on the ensuring power play -- Colorado's sixth of the game -- to win Game 2.

Montreal Canadiens forward Jake Evans left Game 1 on a stretcher after Mark Scheifele charged into him with 56.9 seconds remaining in the game, right after Evans iced the game with an empty-net goal. Scheifele was given a five-minute major for charging and a game misconduct.

"I think it's pretty obvious they're going to look at the incident and we're confident that the league is going to make the right decision," said Montreal coach Dominique Ducharme.

Photo of the day

Nikolaj Ehlers of the Jets helped hold back the scrum as Evans laid on the ice.

"It was a dirty hit. But the league's going to take care of it. If he gets back in the series, we're going to make his life miserable."

-- Montreal defenseman Joel Edmundson on Mark Scheifele, and his hit that took out Jake Evans.

Taunt of the day

As the Toronto Blue Jays play home games in Buffalo, one fan took the chance to dunk on the Maple Leafs. 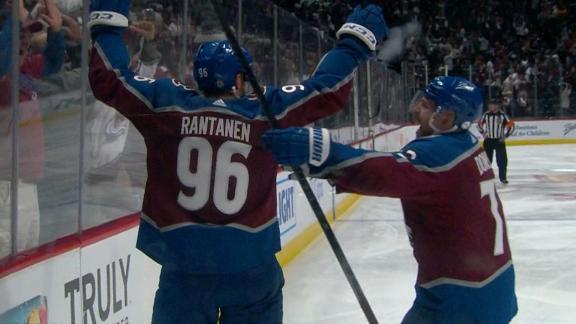 Rantanen comes up with OT winner to put Avs up 2-0 in series
Mikko Rantanen lights the lamp with a power-play goal in overtime to put the Avalanche up 2-0 on the Golden Knights in the series. 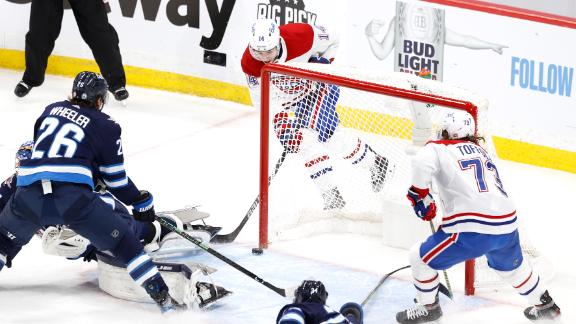 Nick Suzuki displays tremendous patience to score key goal in Habs' Game 1 win
Nick Suzuki waits, then gets Jets goalie Connor Hellebuyck out of position before stuffing in a goal in the Canadiens' Game 1 win. 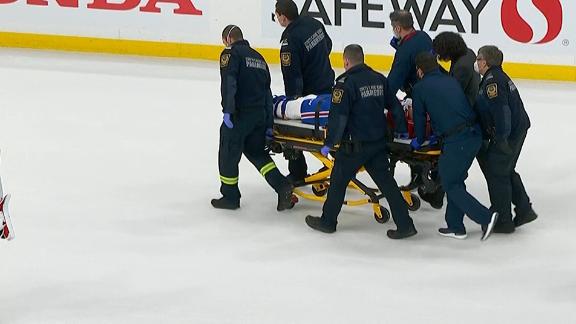