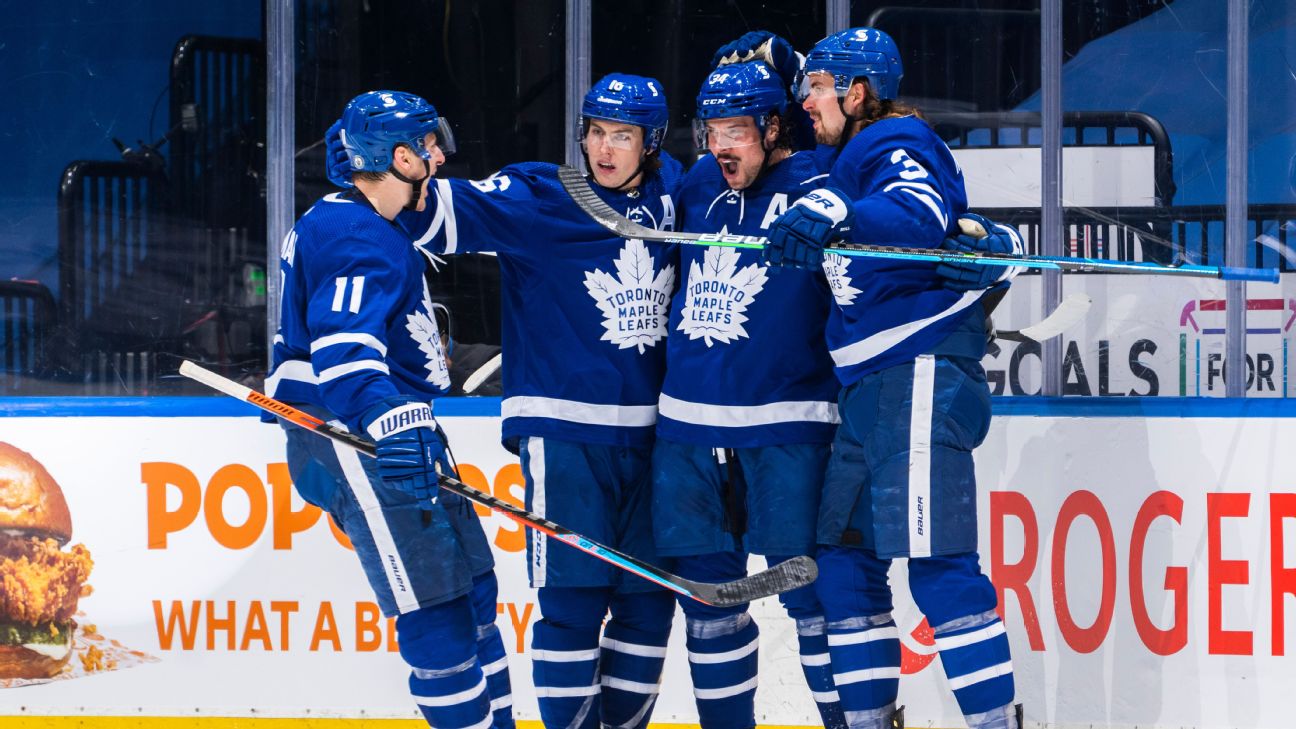 Wednesday brought us three more elimination games, but only two teams were sent packing. The Minnesota Wild kept their series with the Vegas Golden Knights alive with a massive home win to force the first Game 7 of the 2021 Stanley Cup Playoffs. Meanwhile, the Pittsburgh Penguins and Florida Panthers saw their seasons end, while the New York Islanders and Tampa Bay Lightning advance to Round 2.

And today? Don't worry, things aren't slowing down too much, with two more elimination games on tap.

The Maple Leafs have rallied without their captain, John Tavares, who suffered a concussion and knee injury during a scary collision in Game 1. Toronto won the next three games and have a chance to clinch at home. Tavares was able to return to the facility on Tuesday, and has found other ways to stay close to the team. "We get text messages from him for every game reminding us what we need to do out there and what our mindset needs to be like," teammate William Nylander said. "He's been a huge part in it. He's been on FaceTime after the wins in the locker room, so he's there every moment." To stay alive, the Habs need offense. They've scored just two goals in the last 187:16 in this series.

The series shifts back to Nashville, where it's sure to be rowdy. There will be more than 14,000 fans for Game 6, up 2,000 from Game 4. This series is way tighter than most expected, with the past three games all going to overtime, including two in double overtime. "It doesn't really matter who's supposed to win or favored," Canes coach Rod Brind'Amour said. "When you get to this point, I think all that goes out the window." Carolina welcomed back one of its top defenseman, Jaccob Slavin, for Game 5 and the team is confident he'll suit up again in Game 6. "He looked great to me," Brind'Amour said. "And until I hear otherwise, I'm going to leave him alone."

The Islanders made it all the way to the Eastern Conference finals last season, but their fans weren't able to experience it with them. This year is different. It's the last hurrah for the Nassau Coliseum, and 9,000 fans were allowed in Wednesday. They made their presence known.


The Pens outplayed the Islanders for a lot of this series, but Barry Trotz's team always finds a way to stay in games. It was a pair of goals by Brock Nelson and Ryan Pulock 13 seconds apart in the second period -- plus another by Nelson less than three minutes later -- that sealed it for the Isles, who face Boston in the next round. Goaltender Tristan Jarry will be the scapegoat for Pittsburgh in this series, after allowing too many goals on his glove side plus a brutal Game 6 double-overtime gaffe. After the game, captain Sidney Crosby tried shouldering some of the blame. "It's such a small margin for error," Crosby said. "I feel like I didn't make a big play, whether it's overtime or adding to a lead when we're up 2-1. I look at some chances I had -- those kinds of things are so important and you can't overlook the importance of those."Full recap.

Rookie Spencer Knight started once again for the Panthers, but this time his team couldn't muster enough offense to help him out. The Lightning were pretty flawless in this one, controlling the game with a 59.26% expected goals for percentage at 5-on-5, per Natural Stat Trick. Tampa Bay's stars showed up, with Andrei Vasilevsky registering a 29-save shutout, and Steven Stamkos and Brayden Point dazzling with sweet goals.

The Panthers, who have not won a playoff series since 1996, are left wondering about hypotheticals. Maybe things would be different if Aaron Ekblad wasn't injured, or Sam Bennett wasn't suspended for Game 2, or they didn't draw the defending champs in the first round. Captain Aleksander Barkov was also dealing with a shoulder injury, according to sources. And although the team created a Goaltending Excellence Department, it probably wasn't the intention to have three different goaltenders start in this series. Full recap.

A 30-second swing in the third period decided this game. With the Wild up 1-0, the Golden Knights appeared to tie it, though the goal was waived off for goalie interference. Though Wild defenseman Matt Dumba seemed to push Alex Tuch into his goaltender, Cam Talbot the league didn't see enough evidence to overturn. Later on the bench, Tuch lamented: "What am I supposed to do?"

Since Vegas lost its challenge, Minnesota was awarded a power play, and promptly scored to put this one away. Talbot was outstanding, registering a 23-save shutout, and the Wild have showed their resilience -- and then some -- to climb back from a 3-1 hole. The Golden Knights will face some of their demons, as they are 2-8 in their last 10 potential close out games. The first Game 7 of the 2021 Stanley Cup playoffs will be Friday, at 9 p.m. ET. Full recap.

The center has a knack for performing in big games, and he scored two goals (in less than a three-minute span) and assisted on another to help send New York to the second round.

Fiala scored a power-play goal and set up a gorgeous pass on Ryan Hartman's game winner.

The reigning Vezina Trophy winner allowed four or more goals in three of the first five games in this series. On Wednesday, he looked like his dominant self, with a 29-save shutout in the series clincher.

Achievement of the day

Sorry, Capitals fans, but it's probably also worth noting Washington has been eliminated in three straight first rounds since parting ways with Trotz following their Stanley Cup in 2018.

Statement of the day

We all know the Edmonton Oilers' playoff run didn't go as long as they had hoped, getting swept in the first round by the lower-seeded Winnipeg Jets. Oilers defenseman Ethan Bear made an untimely line change in overtime of Game 4, which led to Winnipeg's game-winning goal. When the 23-year-old went home, he was met with racial slurs and abuse on social media.

Bear is from the Ochapowace First Nation, and grew up on a reservation in Saskatchewan. And, as he reiterated Wednesday, is proud of his heritage. Bear has continually used his platform to break down barriers and give back, including hosting an inclusive hockey camp for First Nation kids, and anyone who wants to join, in recent offseasons.

He addressed the situation in a video published on the Oilers' account Wednesday:

The NHL also put out a statement supporting Bear, saying: "Ethan Bear represents both our game and his Indigenous heritage with dignity and pride. He, and all people from Indigenous backgrounds, deserve to feel empowered and respected on and off the ice." 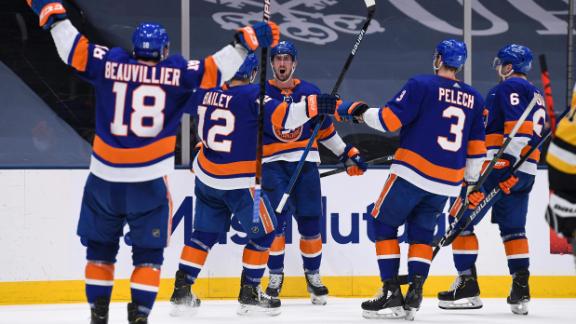 Isles tally 3 goals in less than 3 minutes to eliminate Pens
Brock Nelson scores twice and Ryan Pulock adds a goal in a stretch of two minutes and 59 seconds as the Islanders knock out the Penguins with a 5-3 win. 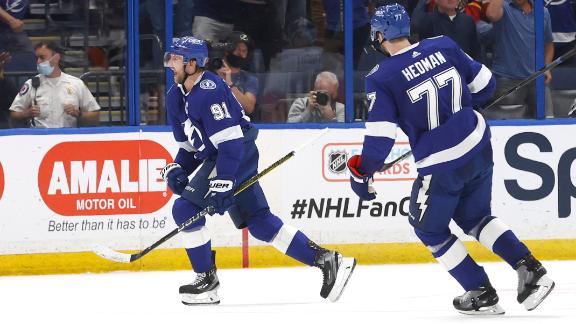 Stamkos rips power-play one-timer as Tampa bounces Florida from playoffs
Steven Stamkos scores his third goal of the playoffs as the Lightning beat the Panthers in Game 6 to move on in the playoffs. 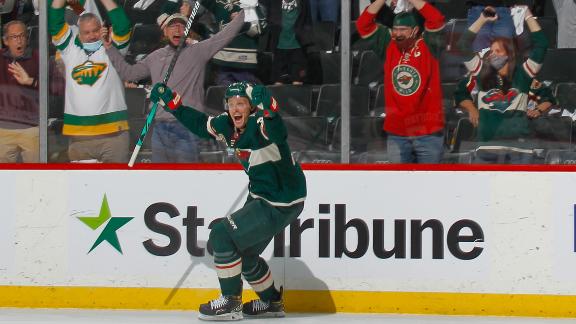