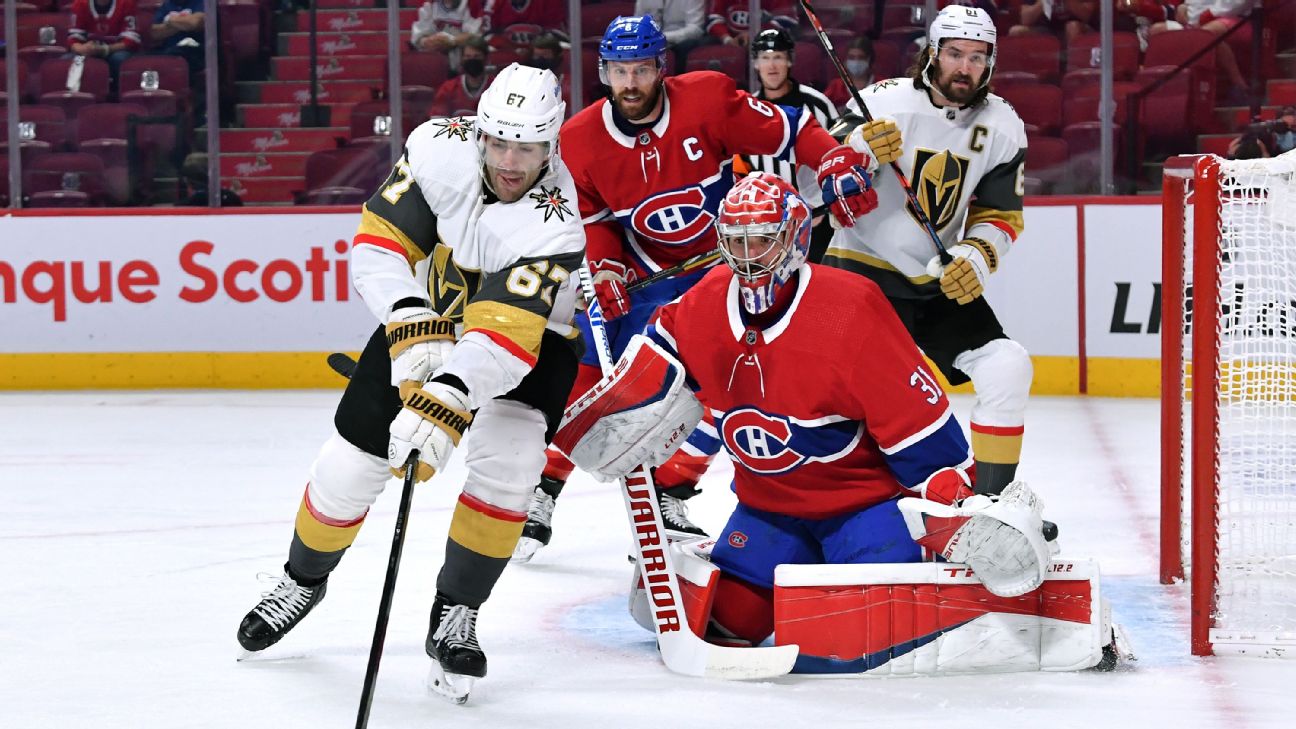 After the New York Islanders took Game 6 on Wednesday night, the NHL is officially two wins away from having the Montreal Canadiens and the Islanders playing for the Stanley Cup -- although the Vegas Golden Knights and Tampa Bay Lightning may have something to say about that before it can happen.

It's win or go home for the Golden Knights, as they try to win in Montreal on Saint-Jean-Baptiste Day. Coach Pete DeBoer is being expectedly coy about whether his starter will be Marc-Andre Fleury or Robin Lehner, the latter of whom was outstanding in winning in Montreal in Game 4.

But it may not matter who plays in goal if Vegas can't ante up some offense. The Knights have scored 11 goals in the series, and only one of them has come from one of their top-five goal scorers from the regular season. If they can't break through offensively against the Habs, they're toast.

The Islanders staged an impressive rally to avoid elimination at the hands of the Lightning, winning on Anthony Beauvillier's goal at 1:08 of overtime. Goals by Brayden Point and Anthony Cirelli gave the Lightning a 2-0 lead, but New York found new life on a goal by Jordan Eberle just a minute and 46 seconds after the Lightning increased their cushion in the second period.

Scott Mayfield -- who may have injured Tampa Bay star Nikita Kucherov with a cross-check on his first shift of the game -- tied the contest at 11:16 of the third period. In what could have been (and might still be) the final game at Nassau Veterans Memorial Coliseum, the Islanders set their fans into a beer-tossing frenzy with the OT win.


"I love this group, the character of this group. And the building, these fans. Going off the ice, everybody's hugging each other, there are beer cans all over the ice. These are great memories to have," said coach Barry Trotz, "but we've got to get another one." Full recap

Beauvillier picked a heck of a time to break out of his scoring slump. He hadn't scored a goal since Game 1 against the Boston Bruins in the previous round. He had one point in his previous six games. But he scored the biggest goal of the playoffs to date for the Islanders, taking advantage of a Lightning giveaway and sending the Islanders to Game 7.

Point created his own goal to open the scoring in the first period: forcing a turnover by Islanders defenseman Adam Pelech and then taking a short pass from Anthony Cirelli to beat Semyon Varlamov. It was Point's ninth straight playoff game with a goal, one short of tying the NHL record set by Reggie Leach of the Flyers in 1976. He also had an assist on Cirelli's goal.

The last time we saw Barzal, he was getting kicked out of Game 5 in Tampa for a cross-check to the face of Tampa defenseman Jan Rutta. But in Game 6, he was a force: Barzal had the primary assists on the goals from Eberle and Mayfield, and was active every time he touched the puck, also drawing a penalty in the second period. A statement game after a lapse of judgment in Game 5.

Saturation of the day

Islanders fans tossed cans of beer and bottles of water all over the ice as the team celebrated its Game 6 overtime win. They continued to do so at least 15 minutes after the game was over in a ritualistic dousing of the Coliseum ice, in what may still be the last game played there.

"Feels amazing, to be honest. Going into OT the building smelled like cigarettes, and now it smells like beers."

Injury of the day

Referee Chris Lee had a great look at the cross-check delivered by Islanders defenseman Scott Mayfield on Nikita Kucherov's first shift of the game. Kucherov continued his shift, throwing a check on Islanders forward Mathew Barzal. He eventually doubled over in pain, and then left the ice for the trainers' room.

Kucherov did not return, having played just 46 seconds in the Lightning loss, leaving the ice just 2:22 into the game. Lightning coach Jon Cooper offered no update on his status.

"It sucks to lose Kuch like that early in the game. Guys battled. We played short the rest of the game," said Lightning captain Steven Stamkos of his teammate, who leads all playoff scorers with 27 points in 17 games.

Fan of the day

Our friend Damien Woody really captured the spirit of the thing. 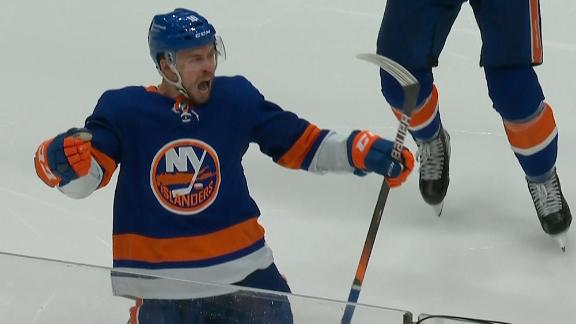