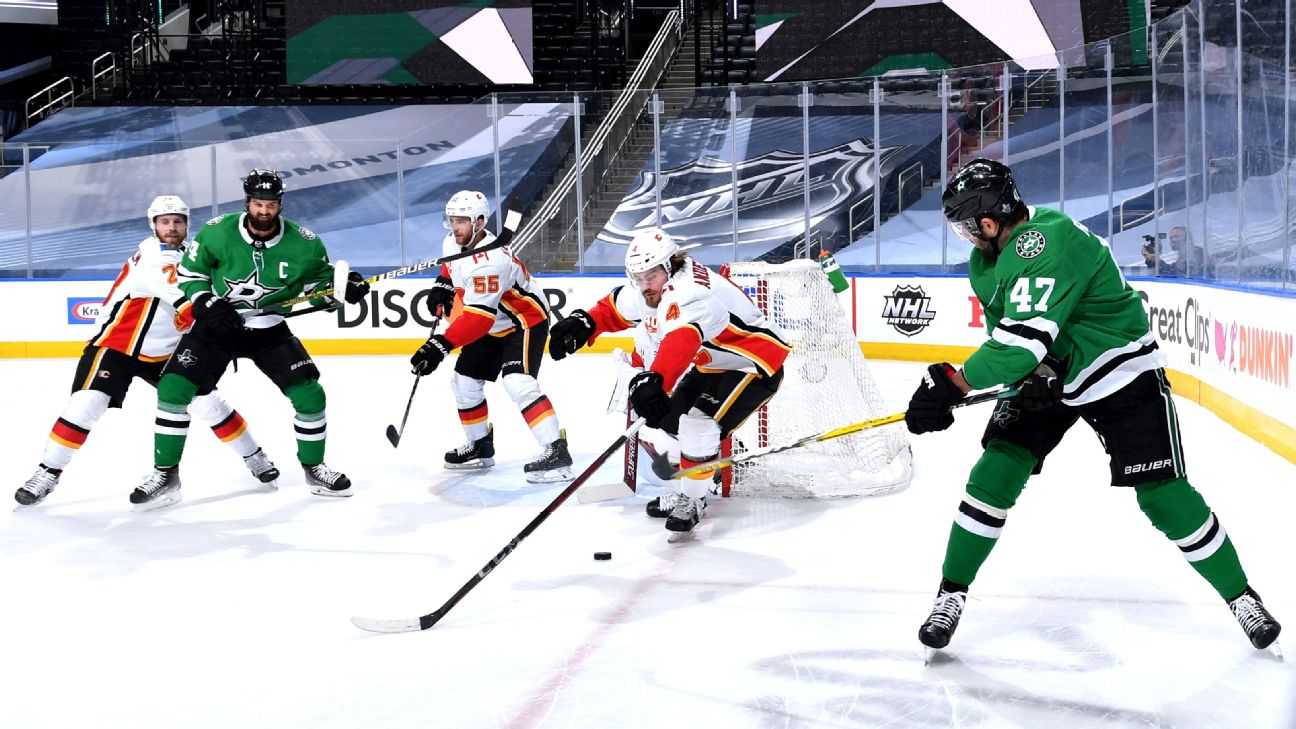 "Elimination Wednesday" in the 2020 Stanley Cup Playoffs was 75% as devastating as promised. Three teams (the Arizona Coyotes, Carolina Hurricanes and Columbus Blue Jackets) are leaving the bubble. One (the Montreal Canadiens) gets to live another day. It was a wild day of hockey; five games brought 35 combined goals.

With the first round winding down, there are only two games on the schedule on Thursday, and nothing before 8 p.m. ET. I miss all-day hockey already.


Check out the ESPN NHL Playoffs Today every day of the postseason until the Cup is handed out in October.

Apparently all you need to do to save your season is shave your head and manscape a goatee. That's what Evgeny Kuznetsov and Ilya Kovalchuk did before a win-or-go-home Game 4; we'll see if the good vibes can continue. Kuznetsov, Alex Ovechkin and T.J. Oshie are the only Caps to score in this series, though top center Nicklas Backstrom may return for Game 5. "It's not really about focusing on them," Islanders winger Anthony Beauvillier said Wednesday. "If we do the right things and play the Islanders' way, make it hard on them just like we play when we have success, that's the thing we have to focus on. It's about us. It's not about them." Nevertheless, coach Barry Trotz is contemplating lineup tweaks to help close out this series versus his old team.

The Stars are on the verge of making the second round in back-to-back seasons for the first time since 2001. The Flames need to win back-to-back games to stay in, and they sure could use their pesky top-liner Matthew Tkachuk for a situation like this. He's been out (undisclosed injury) the past three games, and since then Dallas has clamped down at 5-on-5 to take control of this series. "[Tkachuk is] so skilled offensively -- he's in their face and all over their defenseman," Flames forward Sam Bennett said. "He's an important player -- if we get him back it would be huge, a big boost."

What a shame it is this series didn't go a full seven games. But after entering Wednesday's game playing 100 more minutes than any other team in the tournament, it was clear the Blue Jackets ran out of steam. It feels fitting that this one ended in overtime, albeit only one extra period, and ended with a Brayden Point goal (he also scored the five-OT winner in Game 1). The Lightning are grittier than last year -- especially after adding Blake Coleman and Patrick Maroon -- and got past their Achilles' heel. And a check in on John Tortorella? "You know what, guys? I'm not going to get into the touchy-feely stuff and the moral victories and all that," the coach said, cutting his news conference after two questions. "You guys be safe." Full recap.

For the second straight year, the veteran Bruins knock the upstart Hurricanes out of the playoffs. Boston gave up the first goal, as it did for three of five games in this series, but pulled it out with power-play goals from two seasoned vets: David Krejci (who has been excellent all series) and Patrice Bergeron. As for the Canes? Just listen to how Bruins captain Zdeno Chara began his postgame news conference: "First, I would like to express how good the Carolina Hurricanes -- they are such a good hockey club. Well-coached. They have obviously a very dangerous lineup. It was not easy to beat them. Just want to congratulate them on going to the playoffs and playing really hard. They're very well-coached and they work extremely hard." Full recap.

After an embarrassing 7-1 loss in Game 4, Coyotes coach Rick Tocchet said his team played like they no longer wanted to be in the bubble. His team responded by ... being embarrassed yet again in Game 5. Don't worry, no unwritten rules of hockey were violated in this series clincher. Nazem Kadri scored twice and Nathan MacKinnon had two goals and two assists. MacKinnon's 13 points are the most by an Avalanche player through the first eight postseason games since Hall of Famer Peter Forsberg had 13 in the first eight games of the 2001 playoffs. As is NHL tradition, we did learn after the elimination that a few Coyotes had been playing hurt, including Christian Dvorak, who separated his shoulder midway through the Nashville series. Full recap.

This series has been mostly low-scoring and boring, but Game 5 overcompensated. Wednesday's game featured all sorts of drama: blood, missing teeth, game misconducts, quick responses and finally, some offense! We also got the strange scenario of Carter Hart thinking he was being pulled after his fourth goal allowed, but Alain Vigneault giving him one more shot after winning an offsides challenge to negate it. The Flyers scored all of their goals on the power play (including two by Jakub Voracek, whose beard is getting more Gritty-esque by the day), but this game belonged to the Canadiens, who clawed their way to victory. Joel Armia scored twice, Brendan Gallagher tallied a power-play goal after losing ice time in Game 4, and 21-year-old Nick Suzuki scored the game winner. Full recap.

The Canucks scored first on a short-handed beauty by Tyler Motte, then the Blues scored three straight. This one turned into a doozy, as St. Louis let the Canucks back in the game in the second. "Fell asleep there for 10, 15 minutes of that period," Blues forward Brayden Schenn said. The Blues didn't feel great about their defensive effort, and promised to tighten it up for a win-or-go-home Game 6 on Friday night. Jacob Markstrom kept the Canucks in it, with 36 saves on the night, and improved to a .953 save percentage at 5-on-5 this summer. Vancouver coach Travis Green kept jumbling his lines until he found something that worked. The defending champs now face elimination, and it feels like perfect timing to turn back to Jordan Binnington. Full recap.

He's the second player in Avalanche/Nordiques history with four points in a potential series-clinching game, joining Claude Lemieux in Game 6 of the 1997 conference quarterfinals.

Not sure what this is about, though:


The 34-year-old was the Bruins' best player in the series, tallying three goals and eight points in the five-game series, including a goal and assist in the Game 5 clincher.

The nod could go to Nick Suzuki (game winner) or Joel Armia (two goals), but Gallagher led the tournament with 37 shots before finally getting a huge goal for Montreal on Wednesday -- after being benched in Game 4. Monster game from the alternate captain.

"It's the Gally we love," coach Kirk Muller said after the game. "He brought the guys into the fight tonight. He plays hard. He works for every goal he gets. I thought he played exceptional tonight."

Nazem Kadri scored four goals in a four-period span during the Avalanche series, which is more than he had in his entire playoff career in Toronto (19 games). As teammate Ian Cole wrote while answering a Maple Leafs fan's question in an ESPN mailbag this week: "There's no givesies-backsies. He's ours now."

Farewell of the day

Rick Peckham has broadcast Tampa Bay Lightning games since 1995, but on Wednesday, the 65-year-old called his last one. Epic way to go out. Happy trails, Rick.

Savage moment of the day

Suzuki quickly renounced his own actions in the postgame Zoom. "Not really any intention. I was just skating by. I was excited by the goal," he said. "Just a reaction by me and I saw it in the replay and thinking I probably shouldn't do that. Not trying to be unsportsmanlike, he's a really good goalie." 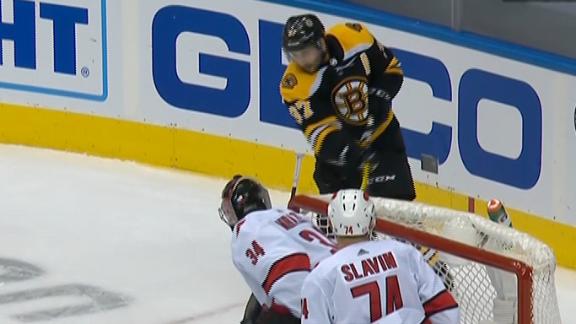 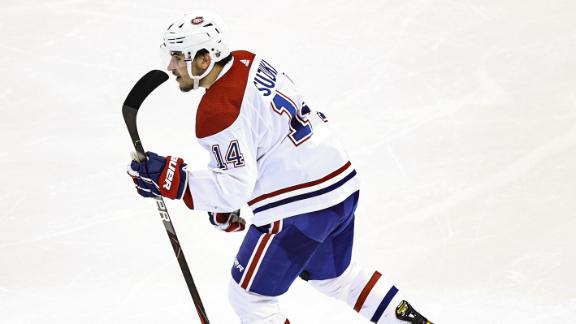 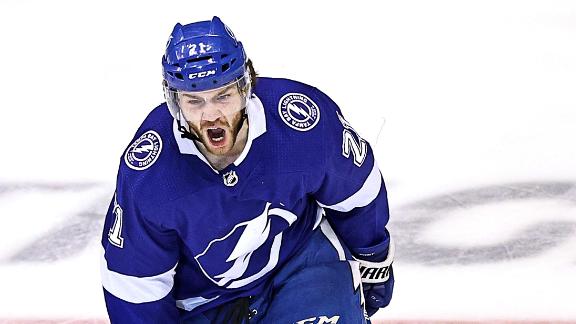 Lightning advance on another Brayden Point OT goal
The Blue Jackets get clumsy with the puck in their own zone and Brayden Point capitalizes, scoring the overtime winner to send the Lightning through to the next round. 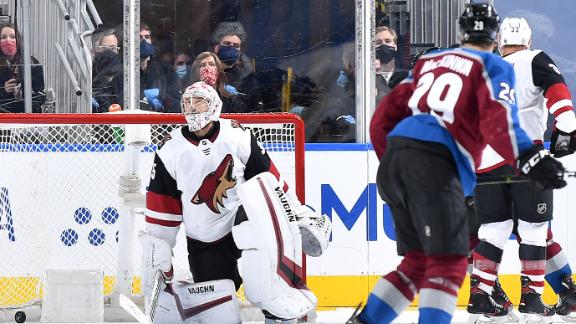 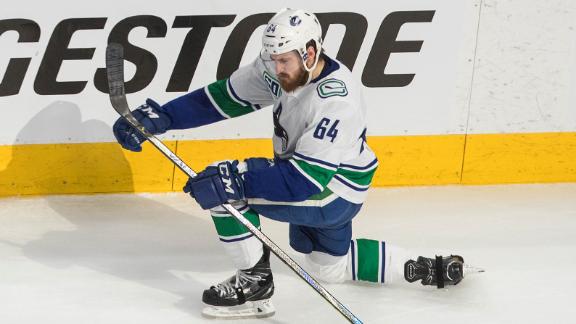