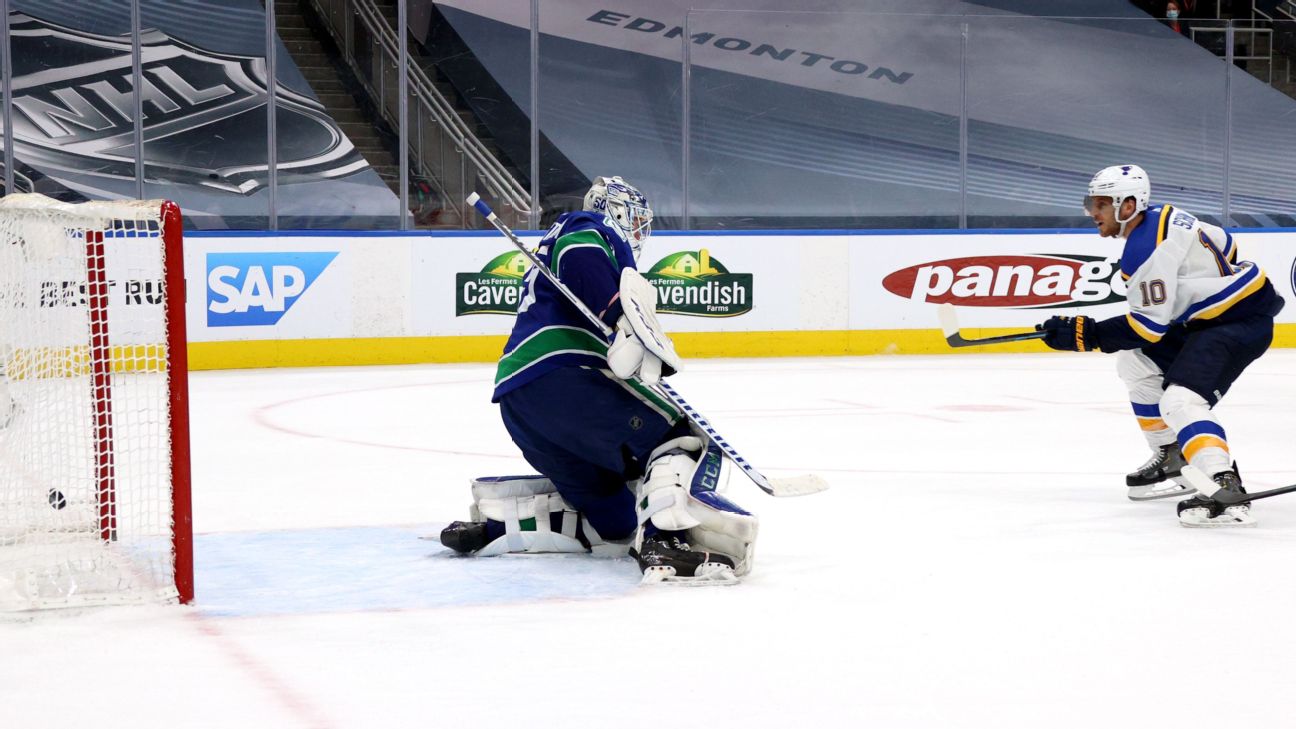 The St. Louis Blues won their first game of the NHL restartand the Washington Capitals were pushed to the brink of elimination by the New York Islanderson a day that featured three overtime games.

Thanks to the Blues' win, no teams face elimination Monday, but that doesn't make the games any less pivotal, as being down 3-1 is no picnic either.


Check out the ESPN Stanley Cup Playoffs Daily every day of the postseason until the Cup is handed out in October.

Coach John Tortorella felt the amount of hockey the Jackets have played -- a five-game qualification-round series, that five-overtime game -- finally caught up with them in their Game 3 loss. "At certain times, even when you go through the regular season, you look at the number of minutes and at some point it catches up with the body. I don't have the equations or the analytics or all that stuff -- I just judge by the athlete," he said. "When it's a group of men that are mentally tired, that's when I start thinking maybe we hit a wall there." Columbus canceled practice on Sunday to clear some heads.

Can Darcy Kuemper do it again? The goalie made 49 saves to get the Coyotes back into this series. "He's arguably the best goalie in the league the last couple of years. If he doesn't get hurt, he maybe wins a Vezina," said coach Rick Tocchet, "and the guys love playing for him." As for the Avalanche, coach Jared Bednar said the last 30 minutes of Game 3 were indicative of how he wants them to play. "And a little more traffic in front of Kuemper wouldn't hurt," he added.

The conversation before Game 3 was about Boston goaltenderTuukka Rask leaving the postseason. The conversation after Game 3 was about Andrei Svechnikov leaving the series -- and potentially the rest of the playoffs -- with an injury caused by a tumble to the ice as he battled Zdeno Chara in the third period. He's been officially ruled out for Game 4. "That's why you have depth. Other guys have to step up. Obviously you're not going to replace that player, for sure, but there's no other alternative," said Canes coach Rod Brind'Amour, who added that it's a "huge possibility" James Reimer gets the crease in Game 4.

Blues coach Craig Berube was noncommittal about whether Jake Allen or Jordan Binnington would get the start in Game 4, after Allen played well in their Game 3 win. "He was exceptional," said Blues winger David Perron about Allen. "We have two really good goalies, and it's up to the coach in who plays in the back-to-back."

Question of the day: Can the Blues win back-to-back games?

The Blues and Canucks play Game 4 on Monday night, 24 hours after St. Louis got back into the series with an overtime win. "We have to have short-term memory loss," said Canucks captain Bo Horvat. "The good thing is that we play again tomorrow."

The other good thing for the Canucks is that splits in back-to-back games have been in the norm in the restart. In the qualification and quarterfinal rounds, there have been 10 instances in which games in a series were played on consecutive days. Eight of them resulted in splits; only the Carolina Hurricanes (against the Rangers) and the Canucks (against the Wild) swept the back-to-back games.

Hurricanes vs. Bruins under 5.5 (-145). Most books have this number down to a total of five goals, but Caesars still had it at 5.5 goals. The Hurricanes have gone under this number in five of six games in the restart, and in their only regular-season game against the Bruins. If James Reimer is in, that just reinforces the under.

Barry Trotz moved to within one victory of exacting his revenge on the Capitals, as Mathew Barzal's goal at 4:28 of overtime gave New York the 2-1 win and the 3-0 series lead. His goal came moments after Islanders goalie Semyon Varlamov (22 saves) made back-to-back stops on Jakub Vrana, who looked absolutely dejected after Barzal's goal. "Sometimes as a coach or a team, your goaltender can erase all your mistakes, and we made a couple of mistakes there, and he erased it," said Trotz. The Capitals were again without Nicklas Backstrom (concussion) and have seen their offense dry up since they arrived in Toronto: Washington has averaged 1.67 in six games in the restart, after averaging 3.42 goals per game in the regular season. Full recap

A sneaky-good series had an incredible Game 4, as Alexander Radulov tipped home a John Klingberg point shot at 16:05 of overtime to knot up the series. Both teams rallied twice from deficits, including the Stars tying the game with under 12 seconds remaining in regulation on a Joe Pavelski goal that completed his first postseason hat trick. Cam Talbot made 57 saves on 62 shots in the loss. Anton Khudobin, getting the start as Ben Bishop remains unfit to play, made 36 saves. Full recap

The Blackhawks are alive in this postseason for one reason, and his name is Corey Crawford. His 48 saves were the difference in Chicago's 3-1 win to stave off elimination, including 19 in each of the last two periods. Drake Caggiula and Matthew Highmore, who had the game winner, scored in the first period for Chicago. Robin Lehner (22 saves) took the loss for the Knights. Could this be the start of a rally for the Blackhawks? "We play fast hockey. We have some great young players to go with the guys that have been doing this for a while. So I like our chances," said Crawford. Full recap

Jakub Voracek scored in the first period and Carter Hart did the rest, as the Flyers goalie made 23 saves and outdueled Carry Price (19 saves) for the Game 3 victory. "They find a way to put one in our net, we were unable to beat their goaltender. They came out hard in the first period, they had a push, which we expected. After that there were chances both ways. We just didn't do a good enough job of outworking their goaltender or helping ours," said Canadiens forward Brendan Gallagher. Full recap

Brayden Schenn scored on a breakaway at 15:06 of overtime to give the Blues their first win of the restart, cutting Vancouver's series lead in half. Jake Allen made 39 saves in his first Stanley Cup playoff start since May 7, 2017, getting the crease as the Blues sat Jordan Binnington. Jacob Markstrom made 47 saves for Vancouver. "All three games have been tight. We ended up getting the winner tonight. You gotta get your breaks here and there, and we scored more than them tonight," Berube said. Full recap

Crawford made 48 saves in a game in which Vegas controlled play and had 96 shot attempts to the Blackhawks' 45 attempts. "He was as good as he's ever been. He was our best player tonight," said Chicago defenseman Duncan Keith.

The Stars signed Pavelski last summer for games like this. The veteran forward tallied his first postseason hat trick in Game 4, including the tying goal with 12 seconds left in the third. "He's a pro. A playoff performer. And he showed today why we signed him," said Dallas coach Rick Bowness.

This spot could have easily gone to Schenn as well, but we'll give Barzal the nod for working through the Capitals' defense -- including Norris Trophy nominee John Carlson! -- for the overtime winner.

Stretch of the day

Joe Pavelski's goal at 19:48 of the third period was reviewed by NHL hockey operations to see if Tyler Seguin had stayed onside before the Stars tied the game. It turned out that he had, with an epic yoga-like stretch to keep his skate on the blue line.

Seguin said he lost his footing on the ice, and he did whatever he could to stay onside during the Dallas rush into the zone. As he went back to the bench, he wasn't sure if he had.

"As a coach, you try to get your players to pay attention to detail. There's an important detail: Just keeping your skate on the ice, on the blue line. Staying in the moment. Being aware of what's going on," Bowness said. "Give Tyler a lot of credit: We're not tying that thing up without his attention to detail."

No wonder Voracek scored the game winner. He had the power of Gritty with him. 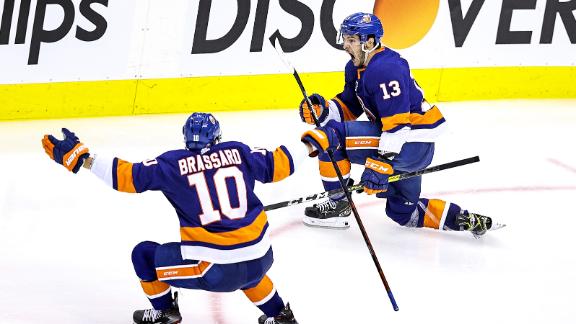 Islanders go up 3-0 in series after Barzal's OT goal
Mathew Barzal storms into the zone and wins it for the Islanders in overtime to increase New York's series lead to 3-0. 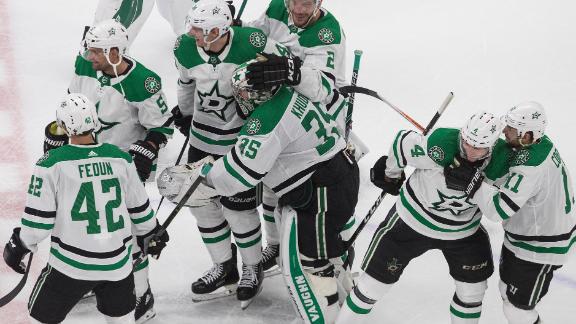 Stars top Flames in OT to even series
Joe Pavelski's third goal of the game ties it late in the third period, and John Klingberg scores the winner in overtime as the Stars beat the Flames 5-4. 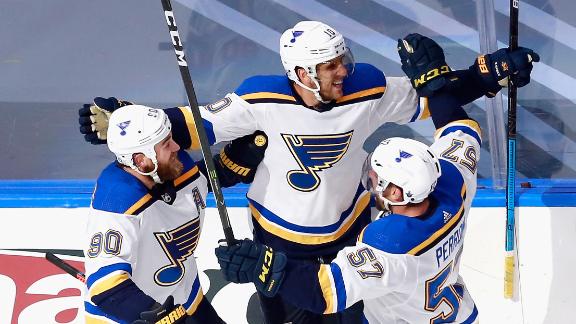 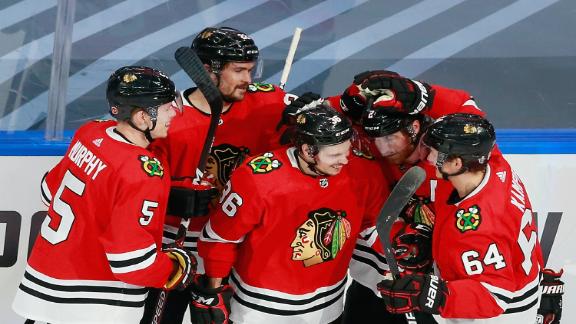 Blackhawks stay alive with win over Knights in Game 4
Drake Caggiula, Matthew Highmore and Alex DeBrincat push the Blackhawks to a 3-1 win over the Golden Knights in order to stay alive in the series. 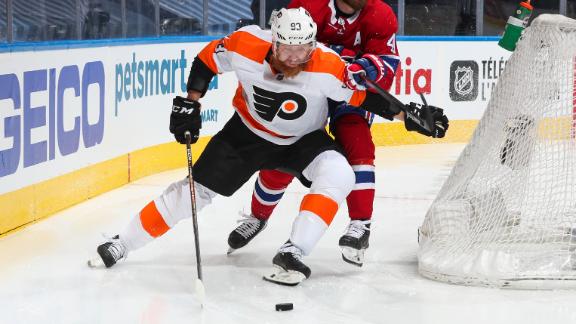