Fare thee well to the Washington Capitals and Calgary Flames, who were eliminated on Thursday night. That means that the No. 7-seeded New York Islanders are through in the East, and the No. 3-seeded Dallas Stars have joined the conference semifinal crew in the West.

Will the St. Louis Blues and Montreal Canadiens follow the Caps and Flames out of the bubble on Friday?

Entering Game 5, this series was tedious and the Flyers had shut out the Canadiens in two straight games. But Montreal rallied for a 5-3 win, and things got really interesting: Brendan Gallagher had his jaw broken on a cross-check from Flyers defenseman Matt Niskanen, who was suspended by the NHL for Game 6. (Gallagher is out for the series.) "I don't think there's anybody in our room that was ready to go home. We proved that last night that we were going to fight and play our game until the end. We knew if we played our game, a solid game, we were going to live to fight another day," defenseman Jeff Petrysaid.

Do the young Canucks have what it takes to close out the Stanley Cup champs? Blues coach Craig Berube knows his team has what it takes to force a Game 7. "This is what our team is built for," Berube said. "I told them at the beginning of this series that it's going to be a long series, and this is how we play. This is our game. We wear teams down over time in a series, and we're going to get to a Game 7."

Question of the day: Will Jordan Binnington get the crease back?

Berube was still mulling over which goalie would start Game 6 of their series against the Canucks, as the Blues face elimination. Does that mean Binnington gets the crease back for the first time since Game 2? He obviously has some experience in winning elimination games. "You've got to look at what your goalie did in the past at certain times, and what he's done this year at certain times," Berube said. "Listen, we have faith in both of our goalies. I think that Jake Allen came in and did a real good job for us, and to me, Binner at the start of the playoffs here in the round-robin was excellent. But I'm not going to make a decision yet on it. I'm going to think about it a little bit."

Canadiens vs. Flyers under 5 goals (minus-120). The Flyers try close out the Habs. The Habs try to survive to play another day. In either case, we expect another low-scoring affair. Montreal has scored more than five goals in only two of nine postseason games. And Flyers goalie Carter Hart will be looking to bounce back.

Washington's revival was short-lived. Goalie Semyon Varlamov made 21 saves as the Islanders shut out the Capitals to eliminate them from the Eastern Conference quarterfinals. Forward Anthony Beauvillier scored two goals, and Josh Bailey had a goal and two assists. "The mistakes that we did in the first couple of games cost us the series," Capitals star Alex Ovechkinsaid. "It's a tough year. Strange year. We tried to do our best, obviously." Full recap.

Here's one for the history books. The Flames built a 3-0 lead just 6 minutes, 34 seconds into the game, and before the Stars had recorded a shot on goal. Dallas took a timeout, scored a power-play goal and went into the first intermission feeling a little better about life. "We knew that if we could score one goal, we would be on them," Dallas center Radek Faksasaid. Rookie Denis Gurianov scored 59 seconds into the second period, then tied the score at 3-3 at 3:25. Faksa scored at 5:47, Joe Pavelski at 7:22 and then Gurianov completed the hat trick at 15:30 of the second period. Gurianov -- who else? -- added a fourth goal in the third period. It was the first time in Stanley Cup playoffs history that a team trailed by three goals and then led by four. Full recap.

The Stars forward became the second rookie in NHL history to score four goals in a playoff game, joining the Blues' Tony Hrkac, who scored four in the 1988 division semifinals.

Beauvillier is tied with Gurianov, Pavelski, Bo Horvat of the Canucks and Nazem Kadri of the Colorado Avalanche for the playoff goal-scoring lead (6), and has nine points in nine games for the Islanders. "I'm just trying to go out there and play your best and help your team to win," Beauvillier said.

The defenseman had a goal and three assists in the win, with his goal sparking the seven-tally rally. He's one point behindNathan MacKinnon for the playoff point lead (13).

"Those guys are champions in my mind, they always will be. As a coach, when you go through a series like that where you've had some success with a group of guys, it tears you a little bit because there's so many good memories. But at the same time, you work for someone else and you want to beat that group because we're competitive. We don't want to lose." -- Barry Trotz of the Islanders on eliminating the Capitals, with whom he won the Stanley Cup in 2018.

Matthew Tkachuk didn't play for Calgary but was still a star on TV.

Many were outraged that Matt Niskanen received only a one-game suspension for breaking Brendan Gallagher's jaw. The Flyers' argument in Thursday's NHL player-safety hearing was that Niskanen did not intend to strike Gallagher in the head but rather his upper body, and that this play is commonplace when defenders are moving players off the puck in a game, with punishment usually handled by the on-ice officials rather than the department of player safety. They also made a body-positioning argument: Niskanen came down with his stick in an effort to get Gallagher's shoulder, rather than targeting the head. Gallagher was crouched down and attempting to play a bouncing puck when the blow was delivered. In the end, the player and his team made a strong case in the eyes of the NHL. 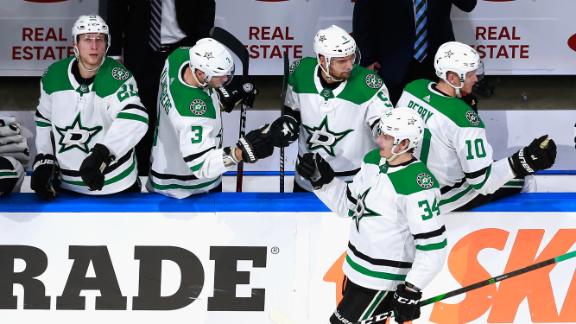 Stars advance behind Gurianov's 4 goals
Denis Gurianov scores four of the Stars' seven goals as they eliminate the Flames from the playoffs with a 7-3 win. 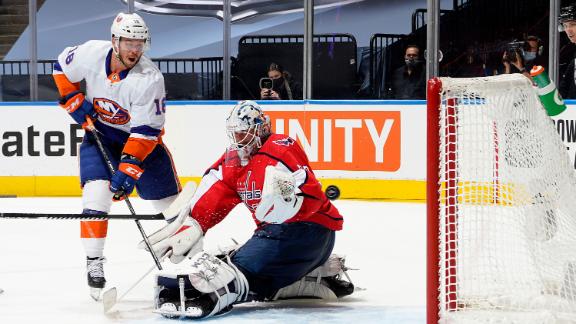