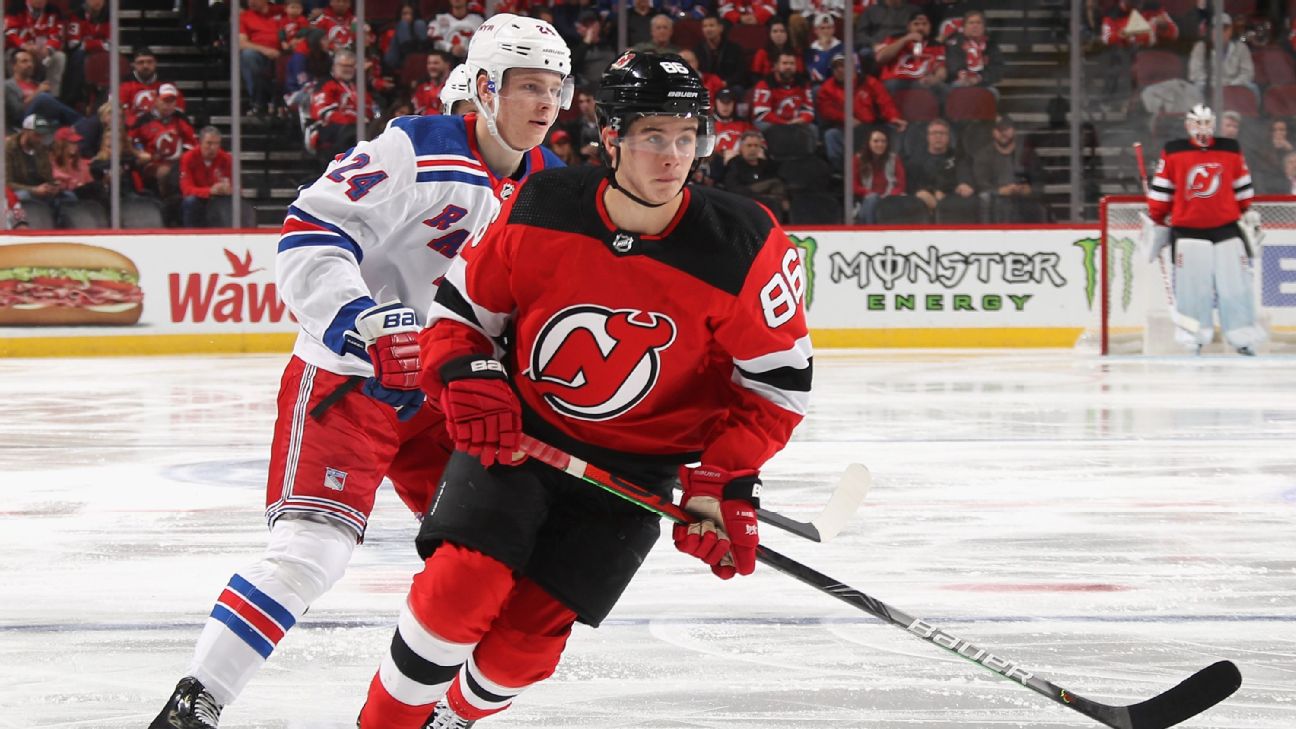 The rookie hype this preseason rightfully surrounded the top two picks of the most recent NHL draft. Jack Hughes and Kaapo Kakko were the two new stars of the biggest media market in the world, so it was only natural they were going to get most of the attention. Yet as we hit the final month of the 2019-20 regular season, there's not a whole lot of attention on either player, and that's also with good reason.

Hughes has 21 points through 56 games, while Kakko has managed 20 points in 60 games. If you extrapolate that out to 82-game rates, Hughes is on pace for 31 points and Kakko 27. The most recent first overall pick to have so few points in his first season is Nail Yakupov, who finished with 31 during the lockout-shortened 2012-13 campaign.

According to Hockey Reference data, 71 18-year-olds have appeared in at least 50 games in their rookie seasons in NHL history. Hughes and Kakko rank 50th and 54th, respectively, in points per game in that same group. While that is certainly not ideal, it's far from unprecedented. Three former No. 1 overall forwards actually rank below Hughes -- Vincent Lecavalier, Owen Nolan and Joe Thornton, who ranks 70th on this list. It's easy to forget now, but Thornton had just seven points in 55 games as an 18-year-old rookie with the Boston Bruins before going on to a career that will land him in the Hockey Hall of Fame after retirement. If there's panic, pump the brakes a little.

There are a couple of ways to look at that. For one, Hughes is the first player to go straight from the U.S. National Team Development Program to the NHL. Most players from that program go through at least a year of junior or college hockey before reaching the NHL. Meanwhile, Kakko is only the fourth Finn to transition directly from Liiga, Finland's top pro league, to the NHL by age 18, joining Aleksander Barkov, Jesperi Kotkaniemi and Patrik Laine. Hughes is still just 18, and Kakko just turned 19 two weeks ago. They're the youngest players in the league, and so far, it has really shown.

Both of them are still exceptional talents with bright futures. But both have had trouble finding ways to consistently impact the game.

In Hughes' case, he is one of the lighter players in the league and has never faced the level of adversity he has seen in the NHL. On top of on-ice struggles, the general manager who drafted him was fired, his first head coach was fired and there's at least a chance Hughes will be on his third head coach of his career by the start of next season. The Devils haven't exactly put their young star in a position to succeed, but Hughes is going to need a big summer to bulk up and find ways to play with older players. His older brother, Quinn, had the benefit of a late birthdate, playing college hockey in his draft year and choosing to stay another year just to be ready. The path for Jack has always been accelerated by comparison; so even though Quinn is 18 months older, he is nearly three years ahead in his development.

In Kakko's case, he has had to adjust to not being a consistent top-six option. That clearly wore on him earlier in the season. Before the Rangers looked as competitive as they have become, there was a reasonable argument that David Quinn should have just kept giving the young Finn minutes for the sake of his development -- but that's also not supposed to be how life works at the NHL level. The Rangers simply have better options right now, and Kakko hasn't done enough to earn top-six minutes for a team that's in a playoff chase. It's hard to blame the coach for that, especially when Kakko's underlying numbers have been especially poor.

Both players appear to be improving, though. Even if the points aren't coming, they're still getting valuable reps at the NHL level. To both teams' credit, they keep throwing both players over the boards. You can openly wonder if either was ready for the NHL, but given the way they both played last season, it was completely reasonable to assume they'd be NHL-ready.

Another factor at play here: We've been spoiled by some freakish first- and second-overall picks over the past few years. Connor McDavid, Auston MatthewsandLaine have set an unreasonable bar. Rasmus Dahlin, who went No. 1 in 2018, had flashes of brilliance last season, but he has had some struggles this season. Kotkaniemi was sent to the AHL by Montreal this season after a strong rookie showing in 2018-19. Andrei Svechnikov, on the other hand, had a decent if unspectacular rookie season, and he is having a monster sophomore campaign.

These are all really good reminders that the NHL continues to become a more challenging league, and a player's development is not uniform. The game has never been faster, the players remain incredibly big and the teenagers are having a harder time making an impact right away.

The Calder Trophy has historically been won by older rookies. Only six 18-year-olds have won the rookie of the year award, and the average age of the past 10 winners is 19.4. When you look at the list of 10 players below, none is below the age of 20. The NHL has become a younger man's game, but there's still a learning curve. The youngest players deserve a little more benefit of the doubt that. Sometimes it's just going to require a bit more patience.

Here are the top 10 rookies in the NHL, with about a month remaining the 2019-20 campaign:

The first rookie defenseman to reach the 50-point plateau since 1992-93, Hughes has been putting up points at a fairly alarming rate. He is closing in on the Canucks franchise record for points by a rookie defenseman, with Dale Tallon's 56 in his sights. Over the past two months, Hughes has averaged 0.92 points and 22:31 of ice time per game. When the Canucks are going, he is as much of an engine as anyone on the team.

Hughes has officially surpassed Makar in raw points, but the Avs blueliner still has the slight edge in points per game for the whole season. Makar also is second on the Avalanche in scoring, while lagging way far behind Hart Trophy hopefulNathan MacKinnon. After averaging a point per game over the first two months of the season, Makar has settled back to a still great but more human pace, scoring at about 0.70 points per game since Dec. 1. His ice time has gone up, however, with Makar playing the second-most minutes among defensemen on the Avs. Additionally, the Avs might have found something in pairing Makar with the more defensive-minded Ryan Graves; they've been a force together. Makar has been day-to-day lately, as he battles an upper-body injury.

Only Auston Matthews and Mika Zibanejad have scored more goals than Kubalik's 23 since Dec. 1. Kubalik has 29 for the season so far, and he has showcased an incredible shot with an ability to get it off from just about anywhere. Additionally, 25 of his goals have come at even strength. Kubalik has been one of the few bright spots on a struggling Blackhawks roster, and his growing ice time has reflected the increased faith in his offensive abilities. It took him a little while to get going, but now that he is scoring, he can't seem to stop.

The Rangers are exceedingly reliant on Fox at both ends of the ice. They control the puck at a much higher rate when Fox is on the ice, as he owns a 7.7% relative Corsi for percentage at even strength. He also is one of only three players on the team in the black when it comes to 5-on-5 Corsi for percentage. In watching the Rangers, Fox has been exceptional when it comes to breaking up plays in his own end. His ability to read the play and anticipate what the opposition is doing is next level. Takeaways can be a bit of a wonky stat in the NHL, but Fox has been credited with 55 so far this season, which ranks tops among all rookies and 11th overall in the league. The points aren't at the level of his peers here, but he is undoubtedly an impact player for his team right now.

After sustaining another apparent injury in Saturday's loss to the Coyotes, Olofsson could be on the shelf for a bit. He remains one of the top rookie scorers and also leads all first-year forwards in average time on ice, with 18:28 per game. He is a true top-sixer in a rookie forward class that is especially light on those. One thing of note is that Olofsson benefits from good linemates. Jack Eichel has been involved in 27 of Olofsson's 40 points this season.He's more than a coattail rider, but he slips down this particular list because he has yet to prove he can produce on his own like some of his peers on this list have done.

An especially undersung rookie this season, Suzuki has been a real bright spot for the foundering Canadiens. Suzuki is tied with Olofsson for fourth in rookie scoring and ranks fifth on the Habs with 40 points. Suzuki has appeared in every game so far this season, and he has helped soften the disappointment of Jesperi Kotkaniemi's sophomore slump. Suzuki is looking like a long-term foundational piece for the Habs.

Marino hasn't played in a month after suffering a facial fracturebut apparently is close to returning after being cleared for contact. The Penguins have certainly missed his steady presence on the back end. Since Feb. 6, the Pens are 4-7-1 and have allowed 36 goals in that span. It isn't just Marino being out, of course, but when you're down a crucial, top-four defenseman, it's going to be a grind.

If he played a bigger role on his team, he probably would be up this list a bit more, but Necas has fit into a depth role quite nicely for the Canes. He also is tied with Quinn Hughes for third among rookies with 27 even-strength points. The addition of Vincent Trocheck to his line very well could lead to a boost in points for Necas, who has heated up a little bit more over the past two months.

The last few weeks have seen Merzlikins and the Blue Jackets come back to earth a little bit. Additionally, Joonas Korpisalo has returned, which could limit the number of starts Merzlikins gets going forward. That said, Merzlikins still has great numbers, and he was a huge part of bolstering Columbus's playoff hopes over a good stretch of January and early February. Though he has lost his past seven decisions, Merzlikins ranks third in the NHL among players with at least 30 appearances with a .922 save percentage.

Overshadowed by his team's struggles, Blackwood has shown some signs that he might be able to be its No. 1 goalie going forward. Despite the quality of the team in front of him, Blackwood has a .916 save percentage and the seventh-best even-strength save percentage in the NHL, at .928. He also has made 40 starts this season, more than any rookie by a significant margin. Blackwood did appear in 23 NHL games last season, so he is just barely a rookie by the NHL's standards, but he has made the race for the All-Rookie Team goalie spot very interesting.
Report a correction or typo
Related topics:
sportsespnchicago blackhawksnhlnew york rangerscolorado avalanchepittsburgh penguinsdailybuffalo sabresnew jersey devilscarolina hurricanescolumbus blue jacketsmontreal canadienslist
Copyright © 2020 ESPN Internet Ventures. All rights reserved.
More Videos
From CNN Newsource affiliates
TOP STORIES