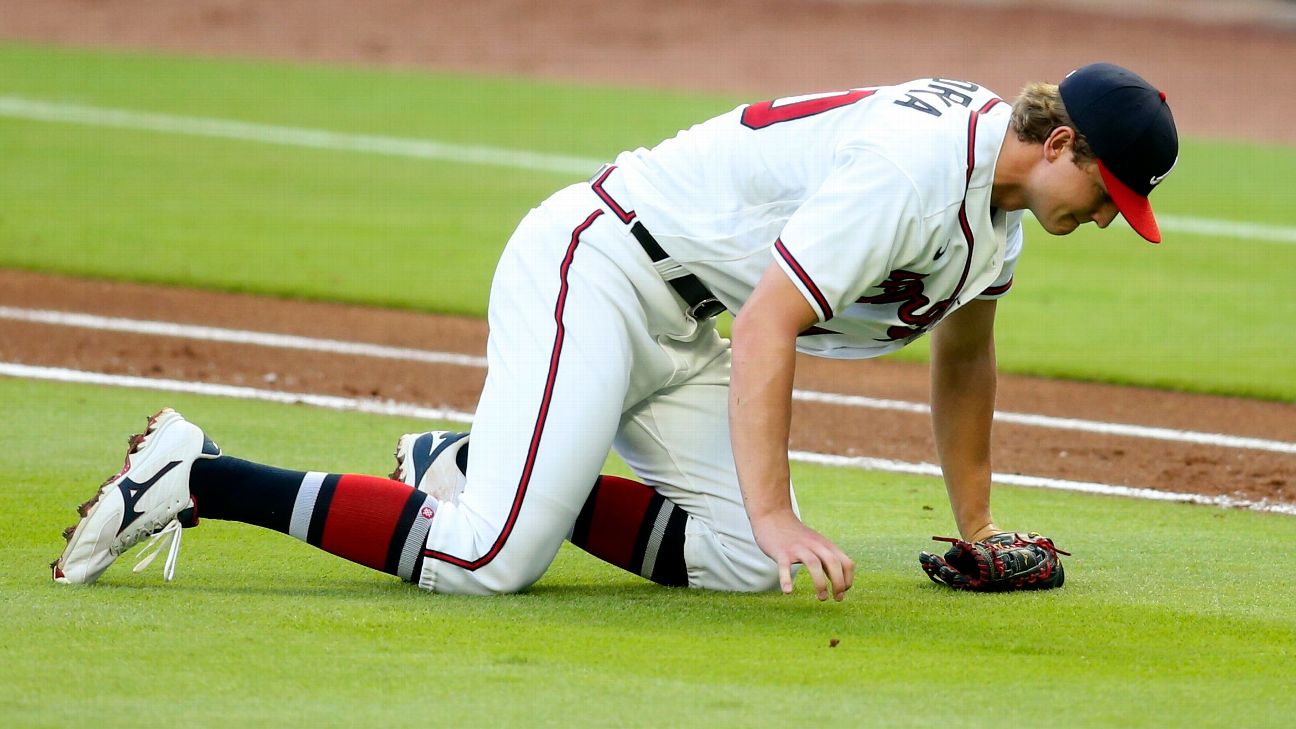 Nothing says watching Major League Baseball in 2020 quite like watching Monday's New York Mets-Atlanta Braves game in Atlanta, hearing a loud clap of thunder and having Mets announcer Gary Cohen explain that the thunder was actually from Citi Field in Queens, where he, Ron Darling and Keith Hernandez were broadcasting the game.

The Mets have had their usual measure of stormy weather already, including a couple of bullpen meltdowns and the sudden departure of Yoenis Cespedes on Sunday, when he opted out of playing the remainder of the season. The Mets entered Monday's game with a five-game losing streak and the division rival Braves looking to sweep their four-game series and gain a five-game lead less than two weeks into the 60-game schedule.


It seemed like one of those games with a little extra must-win urgency for the Mets. After all, they were sitting at 3-7 after one sixth of the schedule, and the Braves were already 5-1 against them on the season. The Mets had two-time reigning Cy Young winner Jacob deGrom on the bump, but the Braves countered with sensational sophomore Mike Soroka in what promised to be a great pitcher's duel, especially because the Mets usually struggle to score runs for their ace.

Instead, the night took an ugly turn, as Soroka suffered a season-ending torn Achilles tendon in the third inning, when he tried to bounce off the mound to cover first base. Meanwhile, deGrom was dominant other than one hanging slider thatTravis d'Arnaudhit for a home run, finishing with 10 strikeouts in six innings. Soroka struggled with his control before his injury, and the Mets scored some runs for deGrom for a change, winning 7-2. In one game, the NL East took a sudden twist in plot, as the stumbling, bumbling Mets righted their ship and the Braves found a huge hole in their rotation.

It's hard to imagine deGrom getting better than he has been the past two years, but that's the case through three starts. He has always had elite velocity, but he's averaging 98.7 mph so far on his four-seam fastball and has hit 100 mph 10 times this season -- after doing so twice previously in his career. His swing-and-miss rate is at 38.0%, up from 31.4% last season. He even dropped in a few curveballs against the Braves, registering a couple of strikeouts because, you know, his fastball/slider/changeup combo isn't enough.

Sure, deGrom has electric stuff, but he's also smart and knows how to make adjustments. When he throws the curveball -- and it's usually only a handful of times in a game -- it's usually later in the game, but he threw several early in Monday's game. Afterward, he explained that his changeup was a little flat, and he wanted to give hitters something "with a little different speed difference." He struck out Freddie Freeman in the first with a curve andMarcell Ozuna in the second after a nine-pitch battle. Imagine seeing eight pitches from deGrom -- including one fastball at 100.7 mph -- and then he drops in a curveball? That's how you can join Greg Maddux and Randy Johnson as the only pitchers to win three straight Cy Young Awards.

Still, deGrom is the one constant with Mets. Everything else, in true Mets fashion, remains a bit chaotic. Cespedes' departure caught the team by surprise, but given the unique circumstances of 2020, it's understandable. "Every guy has to take into [account] their own personal situation, and with all that's going on and recent outbreaks with certain teams, I completely respect Cespedes' decision," Pete Alonso said on a Zoom call with reporters earlier Monday. "I don't think anything less of him. He's a great teammate. If he felt he was at risk, then by all means, this is an unprecedented time."

The slugging first baseman, coming off a record-setting 53-homer rookie season, is the focal point of the Mets' offense but is off to a slow start, hitting .167 with just one extra-base hit (a home run). In many ways, Alonso is also the emotional center of the Mets, and his energy was a big reason the team went 46-26 in the second half last season.


"I always try to refine my craft and try to be the best player I can be, so to not produce is frustrating," Alonso said. "It's my job. It's been tough stringing together the results, but they're going to come. I know they are. I know what I'm capable of. I work hard, I work diligently, I'm a smart ballplayer, so for me, I know it's rough now, but it's only going to be temporary."

He went 0-for-2 on Monday, but to back up that approach, he drew three walks. He mentioned a couple of mechanical things to work on, and the Mets broadcast showed side-by-side images of him in 2019 and 2020, with 2020 showing Alonso's shoulder a little more tucked, his hands resting a little higher and him going a little deeper as he begins his swing. For now, he's watching a lot of footage from 2019 and doing a lot of work in the cage.

The Mets still have rotation issues after deGrom, with Noah Syndergaard out for the season, Marcus Stroman gone for an extended period because of a torn calf and Rick Porcello and Michael Wacha struggling so far.

The Braves, meanwhile, are without the three starters who pitched for them in last year's NL Division Series against the Cardinals: Soroka, Dallas Keuchel (signed with the White Sox) and Mike Foltynewicz (designated for assignment after one bad outing and now at the team's alternate training site). Cole Hamels, signed to replace Keuchel as the veteran lefty, is on the 45-day injured list and will miss more than half of the truncated season.

"To sum it up, this night just sucks," Freeman said. "When you lose, in my mind, one of the top pitching arms in the game for the whole season, it's pretty tough. It just sucks. There's no sugarcoating this night."


Soroka and Max Fried had been the only Braves starters to pitch five innings in a game, so now even more pressure falls on Sean Newcomb, Touki Toussaint and Kyle Wright. Options to replace Soroka include Bryse Wilson, Tucker Davidson or veteran Josh Tomlin, who is currently working out of the bullpen.

That's a group not without potential. Newcomb went 12-9 with a 3.90 as a starter in 2018 before pitching mostly out of the bullpen in 2019. Toussaint is a big power arm who was a former top-100 prospect. Wright was the fifth pick in 2017 out of Vanderbilt, but in 31 career innings in the majors, he has walked 26 batters. Wilson is still just 22 and has a few big league innings, and Davidson had a 2.15 ERA in the minors in 2019. Tomlin might get first crack, but the Baby Braves are going to have to step up.

Given the coronavirus outbreak that wiped out a week of games for the Marlins and Phillies, no division is in chaos like the NL East. If we get through this season, it just got a lot more chaotic. 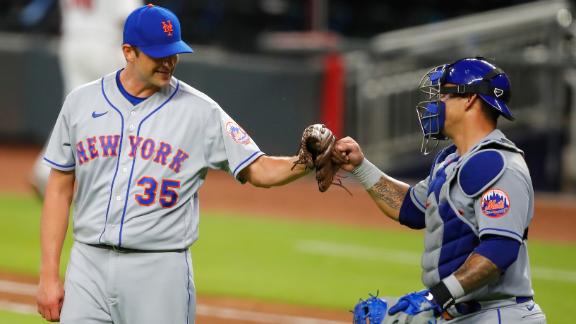 Mets crush the Braves in blowout win
The Braves' five-game win streak comes to an end as Mike Soroka goes down in the third inning and the Mets pull off a 7-2 win. 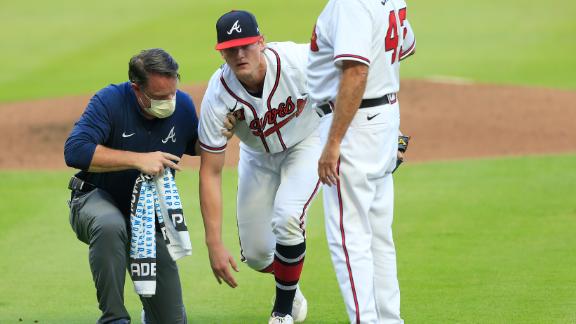 Soroka leaves game with apparent leg injury
Assistance is needed to carry Mike Soroka off the field in the Braves' game against the Mets after he suffers a noncontact injury to his right leg while attempting to cover first base.
Report a correction or typo
Related topics:
sportsespnatlanta bravesmlbdailynew york metsphiladelphia phillieswashington nationals
Copyright © 2020 ESPN Internet Ventures. All rights reserved.
More Videos
From CNN Newsource affiliates
TOP STORIES