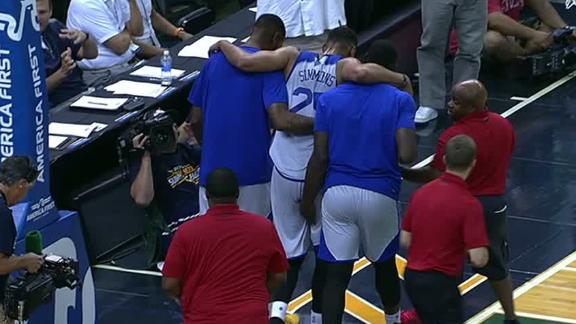 SALT LAKE CITY -- Philadelphia 76ers rookie Ben Simmons, the No. 1 pick in last month's NBA draft, battled cramping in both legs during his summer league debut and needed assistance getting off the court in the fourth quarter of a 102-94 loss to the Boston Celtics. Simmonsdid not return to the game.

The 76ers said Simmons would not play in Tuesday's game against the San Antonio Spurs as a precaution.

"We might have been able to put him back in, but on July Fourth, we didn't need to create those fireworks," Philadelphia summer coach Billy Lange said. "We've got a long summer league schedule ahead of us, between the rest of this summer league and Vegas. We said yesterday we were going to take it smart from here on out."

Simmons said he would make an effort to ward off cramps by drinking more fluids.

"That's the worst I've ever cramped, so I'm definitely going to stay on that," he said.

In his first NBA appearance, Simmons posted 10 points, eight rebounds and five assists over 23:41 of play. He connected on just two of nine shots but displayed excellent court vision and pushed the ball up the floor after rebounds. Philadelphia was plus-9 in plus/minus when Simmons was on the floor. He committed just one turnover.

Simmons, who hadn't played a game since his final collegiate game withLSUon March 12, played only short stints at the start of Monday's game. He was seen trying to stretch out both calves in the second half of the 76ers' summer league opener at Vivint Smart Home Arena.

"I'm good," Simmons said. "Just cramps. ... It's been about four months since I played. That's the main reason. I haven't played in a while."

When not hindered by cramps, Simmons showcased the ballhandling and passing abilities that made him the top selection in the draft. He had a particularly good second-quarter sequence with consecutive highlight-caliber dishes. The first came when, pushing the ball after a rebound, he threaded a pass to fellow rookie Timothe Luwawu-Cabarrot for a layup.

"It's hard to stop somebody that's 6-[foot]-10 coming at you full speed," Simmons said. "As long as everybody else is running with me, I think good things could happen."

Soon after, Simmons delivered a spectacular one-touch pass from the high post that fed Richaun Holmes on the blocks for an easy dunk.Simmons also fed Holmes with an over-the-head no-look feed as part of his passing highlight reel.

"Oh, [Holmes] was just open," Simmons said. "I don't know. He was open and made a play. The big came over trying to block my shot, so I dished it."

Asked what he liked from Simmons' debut, Lange rattled off: "Passing, ballhandling, confidence, communication, swagger, enthusiasm, love for teammates. It wasn't about him. I said that [at Sunday's practice], it was the first thing I noticed. He just was excited to be 19 years old and around a bunch of guys and put that [76ers] logo on his chest."

The conversation steered to Simmons' passing abilities and the notion that he could be a rare breed as a point forward.

"Let's label it, right?" Lange said. "Everybody wants to put a label to it. But he's a basketball player. He's a really good basketball player, and this is summer league, so there's still a long journey ahead. But I think anyone that's watched enough basketball sees a skill set there that's really exciting, and that skill set involves ballhandling, dribbling, driving, passing and looking to score."

Simmons was asked what exactly he'll take away from his NBA debut, and he deadpanned, "I gotta drink more fluids."

Simmons exits early with leg cramps
76ers forward Ben Simmons goes down with cramps in the fourth quarter against the Celtics during a summer league game and is assisted to the locker room.