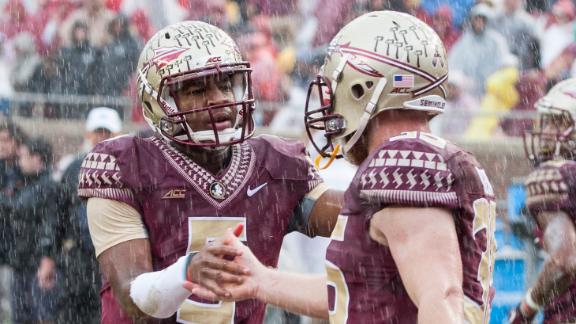 TALLAHASSEE, Fla. -- Quarterback Jameis Winston trotted onto the water-logged field at Doak Campbell Stadium with aspirations of a second consecutive national championship on the line. The top-rankedSeminoleswerein a dogfight, again, and needed their Heisman winner to make a play.

Winston led Florida State (No. 3 CFP, No. 1 AP) 66 yards to put Roberto Aguayo in position for a 26-yard field goal with three seconds remaining, and the Seminoles remained perfect with a 20-17 victory overBoston Collegeon Saturday.

The Seminoles, who have now won a school-record 26 consecutive games, have already locked up a berth in the ACC championship game, but there are bigger goals remaining. Florida State hosts Florida in the regular-season finale with a second consecutive undefeated season on the line. The 'Noles have sat at No. 3 in the College Football Playoff rankings despite being the last undefeated team from a Power 5 conference.

Florida State (11-0, 8-0 ACC) had been plagued by slow starts throughout the season and the Seminoles went into the fourth quarter tied 17-17 with the Eagles. But with less than five minutes left, Winston helped engineer another game-winning drive.

"The majority of the games we've played this year have been like this game," Winston said. "So this isn't anything new.

"We have confidence. So, I told them get ready to score."

Florida State took over on its own 26-yard line after Boston College missed a 43-yard field goal with 4:37 left and the Seminoles drove to the Eagles' 8. Rashad Greene, who had two big drops in the first half, caught back-to-back passes for 11 and 15 yards to move the Seminoles within field goal range. The drive took 4:34 off the clock.

Greene set a school record for career receptions (254) and yards (3,613). Greene also set the school record with a reception in his 40th consecutive game.

"It's one of those things I don't really dwell on right now because I'm so focused on teammates and this season and our goals," Greene said. "I feel like it'll hit me after everything is over and done with.

"I'm more proud of the win than my own accomplishment."

Winston finished with 281 yards passing with a touchdown and an interception. He has thrown at least one touchdown in 24 consecutive games.

Aguayo, who missed a 40-yarder in the third quarter, said it was the first game-winner of his life.

"Honestly, I didn't feel the butterflies," Aguayo said. "It was just kick whatever of my career, kick 100 and whatever.

"Yeah, it was to win the game but you can't think of it like that because that's when things will start going through your head, like, 'Oh, this is a game winner I have to make it.'"

The Seminoles scored on their opening drive for the first time since Oct. 11 against Syracuse. They took a 17-10 lead into halftime after scoring on three of four first-half drives, not including a kneel-down to end the half.

The Eagles (6-5, 3-4) stuck with their run-first philosophy throughout and finished with 240 yards on the ground. Quarterback Tyler Murphy bounced a read-option around the left end for a 21-yard score midway through the third quarter to tie the game at 17. Alex Howell missed a 43-yard field goal with 4:37 left that would have given Boston College the lead.

Jon Hilliman finished with 73 yards rushing on 14 carries and the Eagles averaged 4.7 yards per carry against an FSU defense that couldn't stop the run. Marcus Outlow added 61 yards and Murphy finished with 48 and the touchdown.

"I'm truly disappointed," Boston College coach Steve Addazio said. "I feel like we really had a good opportunity in this game. It's not a lack of effort. We just needed to make some more plays to win this game."

The game came at the end of a traumatic week in Tallahassee. Players wore ribbon decals on their helmets after an alumnus and attorney shot and wounded three people early Thursday at a school library. Police killed the gunman after he refused to put down his gun.

"A game is nothing compared to what happened the other day," Fisher said. "Our condolences go out to everyone. ... Athletics has a way of starting the healing process."

"I really don't know if we really appreciate how much athletics holds a community, universities, cities together because they rally behind them so much," he said. "Hopefully, we can give a little comfort to some folks."