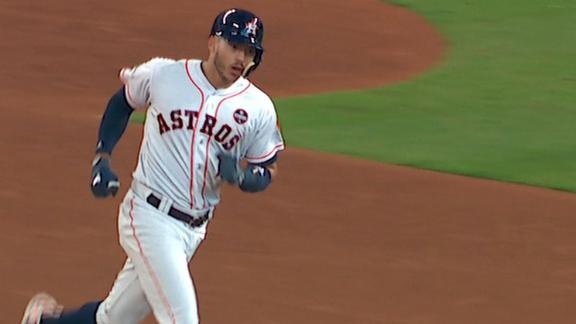 HOUSTON -- Another 12-year-old fan reaching for a home run didn't help the New York Yankees in this AL Championship Series.

Carson Riley, a young Astros fan, tried to make a catch in the front of row of seats when Carlos Correa lined a shot over the right-field wall in the fourth inning of Houston's 2-1 Game 2 win on Saturday.

That came more than two decades after 12-year-old Jeffrey Maier reached over the wall during the 1996 ALCS at Yankee Stadium, benefiting New York when Derek Jeter hit a tying homer in the eighth inning. The Yankees went on to win that game in 11 innings and later won the World Series.

After Correa circled the bases, Yankees manager Joe Girardi went out to talk to the umpires. The homer stood after a crew chief review for a 1-0 Astros lead.

The replay showed that the ball appeared to have crossed over the yellow line and that the boy was reaching with his glove on top of the wall. The ball seemed to be beyond the reach of 6-foot-7 Yankees right fielder Aaron Judge, who was going back toward the wall when the ball ricocheted off Riley's glove and into the seats.

"I thought I was going to get hit. I knew he'd save me," said Carson's mother, Amanda, who was sitting right next to him.

The Riley family was also at Game 1 on Friday night but not in those seats near Judge, the slugging rookie who is a front-runner for the AL MVP with Astros second baseman Jose Altuve, Carson's favorite player.

"I thought we were going to heckle [Judge]. But he's been real nice with all the kids, throwing the balls back and forth," said Riley's father, Michael. "He threw him a ball right before that too between innings. He's cool."