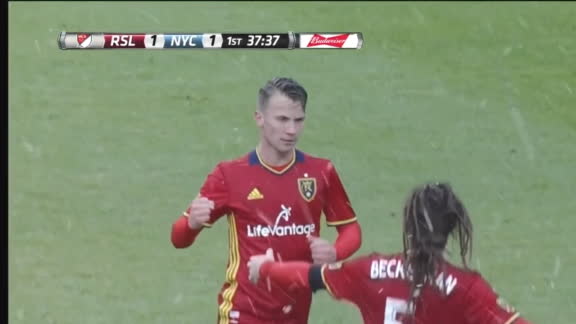 Rusnak, 23, impressed in MLS last season after signing with RSL in January 2017, prompting Vieira to identify the Slovakia international as a potential recruit ahead of the start of the 2018 season next month.

However, a source close to RSL told ESPN FC's Jeff Carlisle there has been no approach for Rusnak and that the club is "quite confident" that the other 22 MLS coaches "would love to have Rusnak on their team."

Vieira worked with Rusnak during his spell in charge of Manchester City's elite development squad before his move to New York to take over at City's sister club in MLS.

Rusnak was unable to make the breakthrough at Man City under Vieira, with the Premier League club instead loaning him to Oldham, Birmingham and Cambuur before his departure to Dutch club Groningen in 2015.

But a source close to the player said Vieira has been monitoring Rusnak's progress and is now keen to work with him again at NYCFC.

Rusnak was among Real Salt Lake's best players last season, scoring seven goals with 14 assists for a team that fell one point short of qualifying for the MLS Cup playoffs.

He is one of Salt Lake's three designated players and made$882,813 last season. If a trade could be worked out, NYCFC would have to buy down his salary with targeted allocation money asVieira already has three DPs in David Villa,Maxi Moralez and new signingJesus Medina.