WABC
NEW YORK (WABC) -- Former tennis star James Blake is calling for the firing of the officer who tackled him in an arrest mix-up Wednesday morning.

"It's not debatable if he should be out there ever again," said Blake Saturday morning, noting that the officer has other civilian complaints against him. "You can't let that pattern continue."

On Friday, the NYPD released surveillance video of the incident in which former tennis star James Blake was handcuffed in Midtown Manhattan. The footage shows Blake standing against a silver post outside the Grand Hyatt New York when the officer approaches suddenly, grabs Blake, spins him around and body slams him to the ground before handcuffing him. 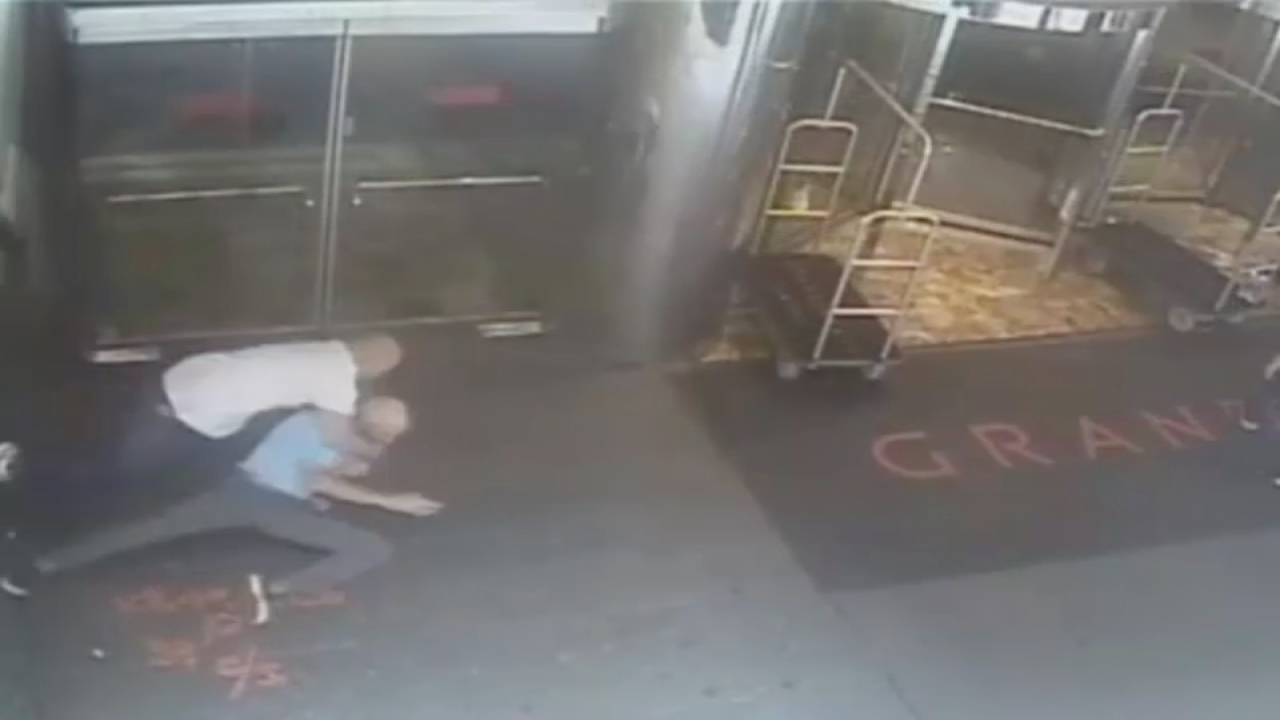 The officer was placed on desk duty as authorities investigate whether he used excessive force. Police said Blake was mistaken for a credit card fraud suspect who looks similar.

In a statement, Deputy Commissioner Stephen Davis said, "The NYPD's Internal Affairs Bureau interviewed James Blake last night. The NYPD is releasing video footage from the September 9th incident outside of the Grand Hyatt Hotel in Manhattan. A copy of the video was provided to Mr. Blake's attorney. The investigation is still ongoing."

Blake, once the fourth-ranked player in the world, is fuming over his treatment as he waited in front of his Midtown hotel for a courtesy car to take him to the U.S. Open.

"It shouldn't have happened," said Blake, who is expected to comment further over the weekend.

Blake said a plain-clothes cop slammed him to the ground in front of the Grand Hyatt on 42nd Street and then handcuffed him, believing he was a suspect in an identity theft case, but he was not. More than 15 minutes later, police sources said a passing retired detective recognized Blake, and told the officers they had the wrong guy.

"It's just something that we'll deal with, with the police, and we'll find out what they have to say internally, hopefully there's video of it and people can see what happened," Blake said. Police "just rushed me."

James accepted Bratton's apology, but said he will not be satisfied until the officers are held appropriately accountable and there is a commitment from the city to make a meaningful financial investment into supporting communities that are affected by these types of incidents. He said he would also like to see a financial investment into protecting the public from excessive police abuse.

In a statement issued late Wednesday, the NYPD said, "subsequent to Internal Affairs investigators viewing surveillance video of the incident at the Hyatt Hotel on Wednesday, September 9, involving James Blake, one officer has been placed on modified assignment. The investigation is ongoing."

"Just the nature, what he described is not what we do, it's not what we're supposed to do," Bratton said.

Bratton said the "modified assignment" is desk duty. He demanded an investigation as soon as he got word of the incident Wednesday. He explained that the officers had been investigating a case of fraudulently purchased cellphones, when an informant pointed out Blake and at least one other man as a suspect.

Bratton also said the suspect they were looking for "looks like the twin brother of Mr. Blake."

"Race has nothing to do with this," Bratton said.

Police Commissioner Bill Bratton and Mayor Bill de Blasio released a joint statement Friday evening saying, "As conveyed by Mayor de Blasio and Commissioner Bratton previously, the City of New York extends deepest apologies to Mr. Blake. This incident remains under investigation to determine what contributed to the errors made, who may be held accountable, and what we can learn to prevent these mistakes from being repeated in the future. This Administration takes the mission of bringing the police and the community closer together very seriously. It is why the City has already invested nearly $29 million to retrain approximately 22,000 uniformed service members -- with thousands more to be retrained in the coming months. It's why we have invested in new technology, and developed new strategies that feature the most focused neighborhood policing efforts ever applied in a major city. And we are beginning to see results, with complaints to the CCRB down to the lowest levels in 14 years. This Administration will continue to vigorously implement these reforms that build trust and respect between police officers and the people they serve, while also keeping New York City the safest big city in America. And we both stand ready to meet with Mr. Blake to further discuss these issues and initiatives."
Related topics:
sportsmidtownnew york cityarrestus opennypdtennis
Copyright © 2020 WABC-TV. All Rights Reserved.
More Videos
From CNN Newsource affiliates
TOP STORIES