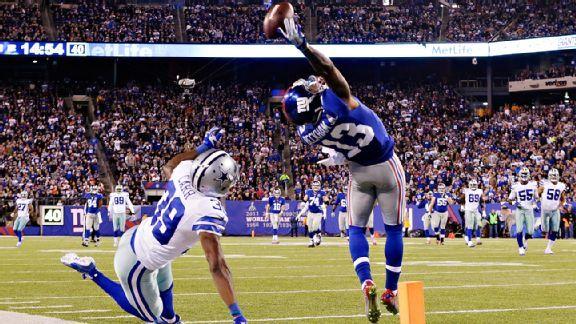 After the New York Giants wide receiver's amazing catch on Sunday night in a loss to the Dallas Cowboys, fans rearranged their Monday night schedules to see Beckham in person.

Steiner Sports, which arranged the signing, didn't change its prices ($39 for Beckham and $69 for Cruz) but did capitalize on the demand of the moment by printing out and selling pictures of Beckham's grab. The company also charged $10 for an inscription such as "Greatest Catch Ever" or "Bend It Like Beckham."

Eric Levy, vice president of athlete relations for Steiner Sports, said that before Sunday night, the company had sold 125 autographs of Beckham. By the time Beckham sat down in the chair at the Roosevelt Field Mall on Monday night, it had committed to Beckham signing 300.

"We're running out of photos," Levy said. "We've already booked him for another signing to keep up with demand."

For Beckham, it has been a thrilling 24 hours that he says hasn't involved much sleep.

"It has been pretty surreal, you can definitely say that," the Giants' first-round draft pick said. "Phones have just been going off. I can't respond to everybody, but it's a great moment for me and my family. It's a lot to take in."

Beckham was happy to oblige any fan who asked him to write "Greatest Catch Ever," but he provided no lifetime guarantees.

Said Beckham: "Hopefully it does go down as one of the best ever, but there's more catches to be made."