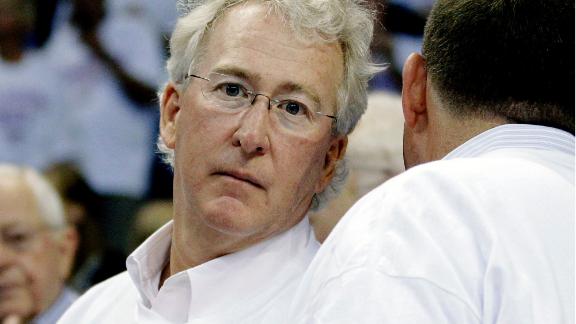 Thunder part-owner Aubrey McClendon, a founder and former chief executive of Chesapeake Energy who was indicted on Tuesday, died in a single-car crash in Oklahoma City on Wednesday, police confirmed. He was 56.

Less than 24 hours earlier, the Department of Justice announced that McClendon had been charged with conspiring to rig bids for the purchase of oil and natural gas leases in northwest Oklahoma.

Police held a news conference Wednesday confirming McClendon was the victim of the crash. According to Oklahoma City Police Capt. Paco Balderrama, the vehicle was traveling well over the speed limit.

Balderrama said police, who are still investigating, believe that McClendon died instantly when he slammed into a concrete bridge pillar shortly after 9 a.m. His 2013 Chevy Tahoe then caught fire. According to an Oklahoma City Police Department incident report, McClendon was not wearing a seatbelt.

"He pretty much drove straight into the wall," Balderrama said. "The information out there at the scene is that he went left of center, went through a grassy area right before colliding into the embankment. There was plenty of opportunity for him to correct and get back on the roadway, and that didn't occur."

McClendon owned an estimated 20 percent of the Thunder and was part of the ownership group led by Clay Bennett that relocated the team from Seattle to Oklahoma City in 2008.

"I am overcome with grief," the statement read. "Aubrey McClendon was a visionary community leader, a trusted business partner and a passionate member of the Thunder family. But more than anything, he was a brother and a dear friend.

"His love of his community and his desire to make Oklahoma a better place will forever inspire all of us. Louise and I offer our love and prayers to Katie and the McClendon family."

"He always treated me very, very well,'' Donovan said. "He was a very generous guy, and I'm just really saddened by what happened today."

Chesapeake Energy holds the naming rights to the Thunder's arena. McClendon left the company in 2013 and founded American Energy Partners one day after leaving Chesapeake.

The indictment alleged that McClendon "orchestrated a conspiracy between two large oil and gas companies to not bid against each other for the purchase of certain oil and natural gas leases in northwest Oklahoma." According to the indictment, the conspiracy ran from December 2007 to March 2012, during which the conspirators would decide ahead of time who would win bids, with the winner then allocating an interest in the leases to the other company.

Leasehold interests usually include the right to develop the land and to extract oil and natural gas for a period of time, typically three to five years.

Each violation of the Sherman Antitrust Act carries a maximum penalty of 10 years in prison and a $1 million fine for individuals.

McClendon had issued a statement on Tuesday defending himself.

"The charge that has been filed against me today is wrong and unprecedented," he said. "All my life I have worked to create jobs in Oklahoma, grow its economy, and to provide abundant and affordable energy to all Americans. I am proud of my track record in this industry, and I will fight to prove my innocence and to clear my name."

Before the SuperSonics' relocation, McClendon was quoted by Oklahoma City's The Journal Record in 2007 as saying the ownership group "didn't buy the Seattle SuperSonics to keep them in Seattle." The NBA fined McClendon $250,000 for the comment because his statement was in contrast to the organization's publicly claimed intentions of keeping the team in Seattle.