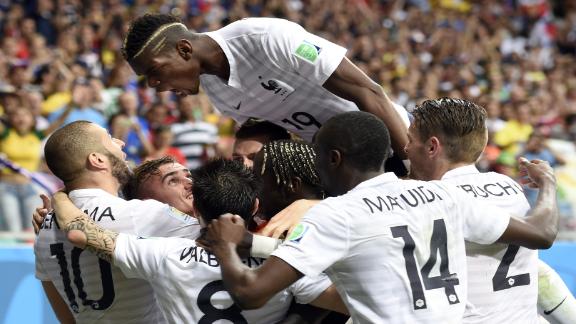 Switzerland coach Ottmar Hitzfeld predicted France will "go very far" in the World Cup after his side witnessed first-hand just how dangerous they can be in a 5-2 defeat.

France led 2-0 within 20 minutes, made it 3-0 by halftime and eventually 5-0 before the Swiss struck back in the final 10 minutes.

Hitzfeld said he knew from watching France's opening victory against Honduras and pre-World Cup friendlies that his players were in for a challenge.

"We have seen France's potential in the previous game," Hitzfeld said. "They had an explosion of power, and in the friendlies they didn't give up any goals. It shows the class of this team.

"They have excellent individual players and France is one of the teams that can go very far in this tournament."

As for his own team's performance, Hitzfeld said he was "very disappointed with our defeat."

"It was truly a very bleak day for us. We were not able to achieve our full potential," Hitzfeld said. "We had to play France's game. We made enormous efforts to score and then there were individual mistakes. We demonstrated a reaction, but it is a very sad day for us.

"France had excellent counter-attacks and that was why it was hard for us to defend.

"With a lack of attention and the heat, we were not able to run as much and achieve the speed we need and mistakes occurred. We have seen many mistakes in many games in this Cup."

Despite the loss, Switzerland, who play Honduras in their next match, still have a chance of qualifying for the knockout stage.

"We still have high hopes of qualifying for the round of 16 and it will depend on us," Hitzfeld said.