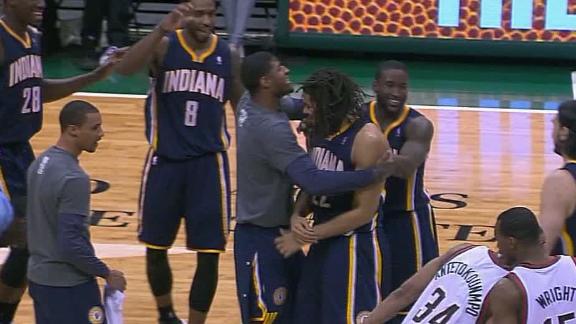 MIAMI -- With the top seed on the line plus some potentially valuable momentum entering the playoffs, the Indiana Pacers plan to return to their full lineup when they play the Miami Heat on Friday night, coach Frank Vogel said.

Vogel surprisingly and controversially held out all five of his starters Wednesday night in Milwaukee, citing the need to rest his front line after a series of disappointing losses, including a stunning blowout home defeat Sunday against the Atlanta Hawks.

His team made the choice look good, squeezing out a 104-102 victory over the last-place Bucks after backup Chris Copeland made a runner with 1.2 seconds left. Combined with the Heat's loss in Memphis, the Pacers vaulted back into the top spot in the Eastern Conference standings by a half-game.

Vogel also gave his starting unit off Monday and Tuesday, meaning the five have had their most time off since the All-Star break. All players went through the team's workout at the Heat's practice facility on Thursday.

"There was a lot of energy at practice, they definitely had their legs," Vogel said. "The decision [to rest the starters] was every bit as much about the bench guys as the starters. Hopefully that took care of the bench, and the fresher legs will help the starters."

Vogel stuck his neck out beginning Sunday, when he benched All-Star center Roy Hibbert in the second half against the Hawks, and then again when he appeared willing to sacrifice a must-win game against the lowly Bucks. It triggered a wave of reaction and theories, but Vogel made it clear he had the support of team president Larry Bird and general manager Kevin Pritchard in the decision.

It worked out -- barely -- but by Thursday, the players made it clear they, too, supported the decision.

"The last month was rough. We're professionals, but it wears on us sometimes," Hibbert said. "This was like a weight off your shoulders because you didn't have to go into a game and mentally prepare for coverages. It was good to relax a bit."

Most of the practice was closed to the media, but several Pacers players said it was the highest-energy workout they'd had in weeks.

"I don't know if it was the day off or just being in Miami," small forward Paul George said. "It's the most time off we've had in a while, and our bodies are benefiting from it right now. We were flying up and down this floor. Hopefully that's a foreshadowing for the game."

Since beating the Heat by one point in Indianapolis two weeks ago, the Pacers are just 2-5 and have struggled in various phases. Although they won short-handed over the worst team in the league, Vogel cautioned that rest isn't guaranteed to be the antidote.

"I think rest is part of the solution. How much, who knows?" Vogel said. "We still have a lot of rhythm and timing and execution that needs to improve."

Pacers Starters Back For Heat Matchup
ESPN.com's Brian Windhorst breaks down the Pacers returning to their full lineup Friday against the Heat after sitting all five starters in the win over the Bucks Wednesday.