Pacquiao: Fans have waited too long 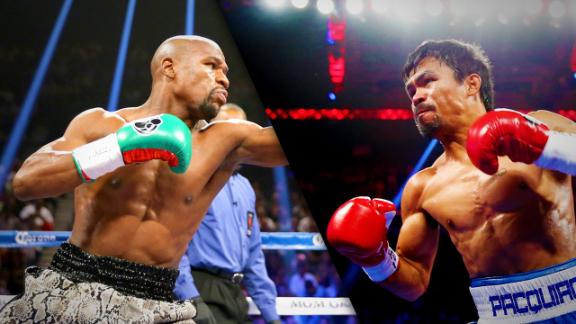 As the rhetoric between the two boxers grows, Manny Pacquiao hasn't minced words when it comes to a potential fight with pound-for-pound king Floyd Mayweather Jr.

On Tuesday, Pacquiao went to the undefeated Mayweather on Twitter to let him know he's ready.

Mayweather-Pacquiao is a fight boxing fans have craved since 2009 but one that never has been agreed to due to various unsuccessful negotiations.

But a potential showdown seemingly took a step toward fruition Friday night when Mayweather said during a Showtime interview that he wants to fight Pacquiao next and wants it to be May 2, the Cinco de Mayo weekend that Mayweather has regularly fought on.

"We are ready. Let's make it happen. May 2. Mayweather versus Manny Pacquiao. Let's do it," Mayweather said.

The interview included Mayweather's first extended remarks on the prospect of the fight in quite some time, and it was the first time he directly said he wanted to fight Pacquiao next and mentioned a specific date.

Pacquiao responded earlier this week that he is willing and able.

"He [Mayweather] has reached a dead end," the Filipino great told skysports.com. "He has nowhere to run but to fight me.

"I will try my best to make this a thrilling and entertaining fight, but I doubt if he's gonna engage me in a slugfest.

"You all know his fighting style. Most of his previous fights, if not all, induced us to sleep."

Pacquiao, who turns 36 on Wednesday, is coming off a dominant near-shutout decision Nov. 22 against Chris Algieri to retain his welterweight title and move to 57-5-2 (38 KOs).

Information from ESPN.com's Dan Rafael was used in this report.

Making The Rounds: Will Floyd-Pacquiao Happen?
Jim Basquil, Brian Campbell and Dan Rafael discuss comments made by Floyd Mayweather Jr., who said he wants to fight Manny Pacquiao. The analysts look at the concessions that need to be made on each side and how big a pay-per-view draw the bout would be.