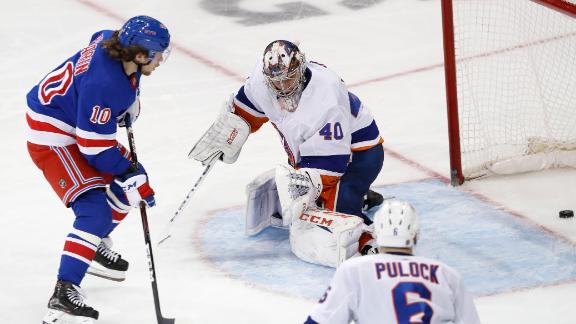 Panarin had two goals and three assists to match a career high with five points, and the New York Rangers beat the rival New York Islanders 6-2 in their first meeting of the season Monday night.

"Every now and then he one-ups himself, and he did that again tonight," Quinn said. "When you think you've seen it all, he just does so many great things out there for us."

Panarin has 26 goals and 41 assists in his first season with the Rangers after signing a seven-year, $81.5 million contract as a free agent last summer. He is the second player in franchise history to have at lest 67 points in the team's first 45 games -- Jaromir Jagr in 2005-06 was the first -- and the first to have at least 40 assists in the first 45 games since Jagr did it in 2006-07.

Panarin had a career-high 87 points in 79 games for Columbus last season, and is well ahead of that pace.

"Nothing new, playing the same as I was before," Panarin said through a translator. "Just trying to play each game 100% and see how it goes."

Jesper Fast had a goal and two assists, Adam Fox added a goal and an assist, and Chris Kreider and Jacob Trouba also scored to help the Rangers get their third win in four games overall and fifth straight at home. Brady Skjei had two assists.

Jordan Eberle and Brock Nelson each had a goal and an assist for the Islanders during their eighth loss in 13 games (5-6-2). Semyon Varlamov made 29 saves on 35 shots before being pulled midway through the third period. Thomas Greiss stopped the one shot he faced over the final 9:45.

"Their top guys were better than our top guys," Islanders coach Barry Trotz said. "I thought our level of battle wasn't where I expected it to be tonight. ... We got what we deserved."

Panarin, facing the Islanders for the first time in the regular season since spurning them to sign with the Rangers last summer, increased the lead to 4-1 when he backhanded the puck past Varlamov on a breakaway 49 seconds into the third period.

Panarin got his second of the night and 26th of the season on another breakaway, as he beat Varlamov from the right side at 8:54. It gave him his second career five-point game, and first since Dec. 8, 2017, at New Jersey while playing for Columbus.

Trouba made it 6-1 with a slap shot off a faceoff on the power play with 9:45 left. That ended Varlamov's night.

Nelson batted the deflection of Eberle's shot out of the air and over Georgiev's left shoulder for his 16th with 7:12 remaining.

With the score tied 1-all after 20 minutes, Kreider redirected Panarin's shot past Varlamov for his 15th at 5:06 of the second to give the Rangers the lead.

Georgiev stopped an attempt by Noah Dobson near the midpoint of the second, then made a kick save on Anders Lee's try on the rebound.

Fox made it 3-1 as he got the puck at the right point, skated up the right side and fired it past Varlamov between his left pad and glove with 8:49 left. It was the defenseman's sixth of the season and first since Nov. 30 at New Jersey.

The Islanders picked up the intensity and outshot the Rangers 9-0 over the final 4 1/2 minutes of the middle period, but Georgiev stopped them all.

The Islanders had the first three shots on goal in the first minute of the game, before the Rangers picked up the pace and finished the period with a 17-7 edge in shots.

Eberle got the Islanders on the scoreboard just 18 seconds in, putting the puck past Georgiev from the right side on the game's first shot. It was Eberle's fifth of the season.

"That happens," Panarin said. "We tried to just brush it off and continue to play our game."

Two fights broke out nearly two minutes later, first between the Rangers' Michael Haley and the Islanders' Ross Johnston. Before the ensuing puck drop, the Islanders' Matt Martin and the Rangers' Brendan Smith dropped their gloves and traded punches, earning game misconducts and ejections for a second fight during the same stoppage of play.

Fast pounced on a rebound of Panarin's shot and knocked it in from in front for his eighth to tie it at 8:13.

"We did a really good job of recovering from our poor start," Quinn said. "After the first four or five minutes of the first period we got our legs under us. We really established the tempo we needed."

Game notes
Panarin has had at least three points in six of the last nine games, totaling six goals and 16 assists during that stretch. ... The Rangers have won three of the last four meetings after losing 12 of the previous 13 since the start of the 2015-16 season. The teams play three more times this season, including twice in the next eight days. ... The Rangers improved to 16-0-2 when leading after two periods. ... Former Rangers C Derick Brassard faced them for the first time since signing with the Islanders in the offseason. He had an assist on Nelson's goal. ... The Islanders are 11-10-2 since a franchise record-tying 17-game point streak (15-0-2) left them at 16-3-2 on Nov. 23.

Islanders: Host the Detroit Red Wings on Tuesday night before hosting the Rangers on Thursday night.

Rangers: At the Islanders on Thursday night.